Lions and tigers and bears, oh my!

Lions and tigers and bears, oh my! 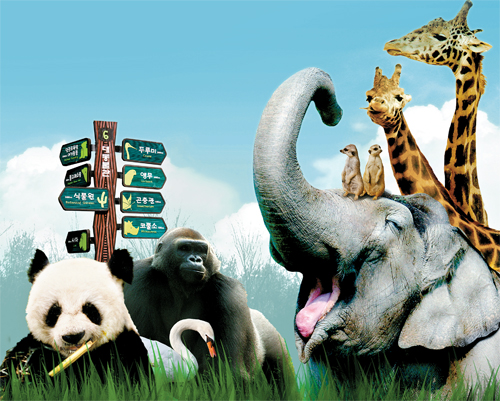 The first zoo opened in Korea almost100 years ago. Although zoos are generally recognized as places of amusement, the creation of Korea’s first zoo, located on the grounds of Changgyeong Palace in central Seoul, is remembered by many Koreans as a tragic event in the country’s history.

In November 1909, before the demise of the Joseon Dynasty (1392-1910) and the beginning of Japan’s colonization of Korea (1910-1945), the Japanese tore down part of Changgyeong Palace to create a zoo, which they renamed Changgyeongwon. It became the 36th zoo in the world and the seventh in Asia.

Speaking about the decision to build the zoo inside the palace, Ito Hirobumi, the first Resident General during the colonial period, said it was built to honor the Joseon king. King Sunjong, the last king of the Joseon Dynasty, even donated his horse to the zoo when it opened.

But it soon became clear that the purpose was actually to humiliate the royal family and diminish its power. People protested at the fact that the palace was now a place for animals, when once it had housed royalty.

The zoo was destroyed during the Korean War (1950-1953), but was later restored. In May 1984, the zoo was moved to Gwacheon, where it is now known as the Seoul Zoo, following a period when it was known as Seoul Grand Park. When the zoo opened in its new location, it drew over one million visitors every day.

The country’s zoos were popular weekend destinations until the mid 1990s. They have since lost visitors to amusement parks, video game rooms and other diversions, but are still popular destinations for families and tourists.

Korea has 17 zoos: Seoul Zoo and Everland in the Seoul metro area, and 15 zoos in major cities such as Busan, Dajeon and Jeonju. Aquariums are included in those numbers.

There were privately owned zoos in Korea until the late 1990s, but most of them closed because they were too expensive to operate and importing animals was strictly restricted.

In the past 100 years, the way animals are kept in captivity has changed. In the beginning, animals were locked in steel-barred cages.

Now, animals are given more space and live in an environment that is closer to their natural habitat.


The history of zoos dates back to 3000 B.C. in Egypt, Greece, Mesopotamia, Assyria and Babylonia. Aristotle wrote “History of Animals,” in which he identifies 500 kinds of animals. The first recorded descriptions of animals in Asia were found in China and date to 1100 B.C., when kingsnakes, turtles, rhinoceroses, tigers, and deer were raised for the king and aristocrats.

Schonbrunn Zoo, established in 1752, is the oldest zoo in the world. It was originally a private menagerie given by Emperor Franz Stephan as a gift to his wife, Maria Theresa. Thirteen years later, in 1765, the zoo was opened to the public by the emperor’s son, Joseph II, in response to the wishes of his people. It was the first private zoo opened to the public in the world. The original building that housed the animals is located in the garden of Vienna’s Schonbrunn Palace and was a circular building that had a special room in the center where the empress could dine as she watched the elephants, camels and zebras.

The history of zoos continued with London Zoo in Regent’s Park, Britain. While most preceding zoos had been established and run by monarchs for their enjoyment, the London Zoo completely changed the nature of zoos. Managed by the Zoological Society of London, it was established by and for the people. The word “zoo” originated with the London Zoo, which used to be known as “The Zoological Garden of London,” and was later shortened to “Zoological Garden” and “Zoo.”

Zoos were not always the pleasant places they are today. Carl Hagenbeck, a German merchant and collector, put both humans and animals on display at his zoo in 1874. His “Human Show” exhibited adults and children from Samoa and Lapland in northern Scandinavia, along with some reindeer.

The 19th century became an age of suffering for animals. Hunters killed dozens of adult rhinoceroses and lions before capturing their young, who would only surrender once their parents were dead. Many of these animals later died in captivity, during stressful journeys from their native lands that could go on for months.

Eventually, awareness about extinct and endangered species increased and animals were treated more humanely. If the zoos of the past were for the people, the zoos of today are for the animals. They tend to focus on animal conservation and strive to emulate an animal’s natural habitat.

“The capture or trade of wild animals has been effectively banned since the nineties,” said Mo Eui-won, the director of the Seoul Zoo. “Since then, only surplus animals or those born in captivity can be supplied to zoos.”

The Bronx Zoo in New York has an area called the Congo Gorilla Forest, where foggy squalls pour down and groups of gorillas sit around on tall trees. It is just like the African jungle itself.

California’s San Diego Zoo, one of the 10 largest zoos in the world, strives to conserve a variety of species. All of the animals in the zoo, except the birds, live in cageless natural environments. The zoo has 3,231 animals of 859 species, including 872 mammals of 189 species, 1,900 birds of 543 species and 460 reptiles of 127 species.

Disney’s Animal Kingdom, a theme park at the Walt Disney World Resort in Florida, is perhaps one of the more entertaining zoos. It replicates animal habitats from the African savanna, a Southeast Asian tropical forest and the sea.

Jurong Bird Park in Singapore, the biggest wild bird park in the world, is inhabited by 8,000 birds of 600 species. The artificial waterfalls, rain and rivers inside the birdcages help to replicate the foggy atmosphere found in their habitat. Flamingo and parrot shows are popular attractions and it is the second biggest zoo for penguins.


Protecting animals - and zoos - from extinction


The zoos of today generally have a single mission: animal conservation.

Many zoos work to prevent endangered species from going extinct by focusing on breeding and conservation, with the ultimate goal of returning animals to their original habitats and increasing their survival rate.

Zoos in Korea employ a variety of animal conservation techniques. The Seoul Zoo has injected animals with microchips since 2004 to keep track of their family histories. It also has the genes of its animals tested to prevent inbreeding and eliminate inferior breeds. As part of efforts to increase the Siberian tiger population, 50 of the country’s Siberian tigers were recently registered with the International Tiger Studbook at Leipzig Zoo in Germany. Once they are registered, the tigers can be exchanged between zoos worldwide, which helps prevent the deformities that can result from inbreeding.

Developing artificial reproduction technologies such as ovum transplantation and cloning is an important criterion that decides future of Zoos. Zoos also collect and store the sperm of endangered species for artificial insemination.

Along with species preservation, zoos do research on animal diseases. The diseases contracted by wild animals are closely related to those contracted by livestock and humans.

Zoos cannot survive without public support and many have been on the brink of bankruptcy, including London Zoo in the 1980s. Financial support from the public and the government saved both from closing down. In the early 1990s, the L.A. Zoo had difficulties with facilities and organizational structure. These issues were addressed by issuing bonds to finance new construction and make much needed repairs to the Zoo. Zoos in Korea have faced similar problems as well.