Getting a leg up at a global level

Getting a leg up at a global level 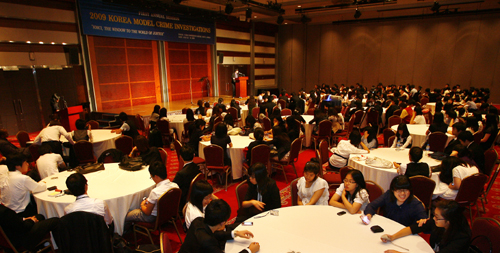 Suh Yei-rim, a sophomore at the Hankuk Academy of Foreign Studies, has participated in model United Nations conferences eight times. The 18-year-old also attended the first-of-its kind Korea Model Criminal Investigations competition held in Seoul on July 18 and 19, where participants took on the roles of everyone from investigators to suspects in various debates.

Over the past two years, Suh has devoted dozens of hours to these types of English-only simulation programs, developing debate, communication and research skills while at the same time learning about diplomacy, globalization and even U.S. law enforcement along the way.

Though some Korean teenagers would rather spend their precious little free time playing video games, watching movies or hanging out with friends, Suh and a growing number of high school students across the country are turning to “model” competitions conducted in English to gain an advantage in the college admissions process and brush up on their language skills. 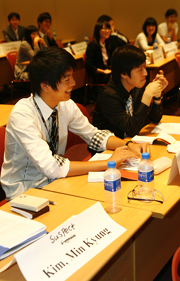 The first Korea Model Criminal Investigations took place on July 18-19 at COEX, southern Seoul. Some 210 high school students participated in the competition, modeled after crime scene investigations in the U.S. By Oh Sang-min

“I want to work on the global stage in the future,” Suh said. “By participating in a variety of competitions, I can foster my leadership skills. And if I want to become a CEO at a global company, English communication skills are a must.”

Programs on the rise

Education experts and other observers say these programs can indeed help students get into college. But critics warn against relying on them too heavily, saying some of the programs are unstructured and unorganized. Other skeptics say that the lion’s share of the events focus on identical themes, meaning there’s little diversity in subject material.

Still, these programs are growing in number, becoming a “must-do” activity during winter and summer breaks for many Korean high school students.

At least 22 of these simulation-type programs are being held in Korea this year - eight of which are new, according to research by the JoongAng Daily. Of those, 11 are model UN conferences run by different groups. There are also ones focused on the political and business worlds as well as other areas.

The trend mirrors the spike in the number of Koreans studying at universities and graduate schools abroad, which has jumped from 187,683 in 2004 to 216,867 last year - a 15 percent increase.

High school students view participation in these events as yet another arrow in the quiver when applying to colleges both at home and abroad, giving them more ammo against other candidates.

And while private enterprises and universities typically spearhead such events, groups of students are now scrambling to organize their own model competitions as well.

Some Korean students even fly overseas to join international contests held in other countries.

Jeon Hye-ryung, a freshman at Seoul Global High School, has participated in the Harvard Mock Trial for high school students and the American Mock Trial Invitational, both held in the United States. Jeon says she wants to become a lawyer specializing in international corporate law, and that she believes these programs will help her get into a top university.

The programs typically involve competitions that aim to simulate real-world organizations and settings through debates, role-playing and other activities.

The model crime investigation competition, for instance, allowed participants to take on the roles of various parties involved in a criminal investigation. During the two-day event, held at COEX in southern Seoul, around 210 registered participants were divvied up into groups representing different U.S. law enforcement and criminal investigation organizations including the FBI, the Department of Homeland Security and the CIA. Each committee was provided with criminal scenarios, with some students taking the role of suspects and others of law enforcement officials and investigators. Under the leadership of chiefs, deputy chiefs and assistants dispatched to each committee, the students participated in interrogations and debates.

Lee Yun-seok, one of the three founders of the competition, said there are numerous benefits to participating in such an event.

“Of course the experience of participating in model contests could help one obtain extra marks in the college admission process, thus placing the student in a more advantageous position,” Lee said. “But I see it more as a way for participants to explore their talents and future career possibilities.”

Lee graduated from of an international school in the Philippines and is now preparing to apply at universities. The 19-year-old, who previously participated in and won various model UN contests, says he wanted to put together something new.

“The existing model contests for high school students have such banal frameworks and scenarios,” said Lee, who is an avid fan of U.S. TV shows such as “CSI,” “Law and Order” and “Criminal Minds.” “Issues such as climate change and humanitarian support have already been discussed by so many people.”

“While students in the past only had to show good test scores, now they are supposed to prove that they can excel in other areas,” Kim said. “That means we’re seeing more well-rounded students than in the past.”

According to Park In-ho, a social sciences teacher who advises third-year students at Hankuk Academy of Foreign Studies about college admissions, those with experience in model competitions in English have a competitive edge for special slots that universities reserve for global-minded students.

Colleges such as Korea, Sogang and Hanyang universities are good examples. They have set aside some enrollment space for global-minded students, placing a top priority on applicants with a proficiency in English or other major foreign languages including Chinese, Japanese and French. The schools say that, aside from exam scores, they weigh cultural understanding and other criteria as well.

The broadened admission strategy is part of the Lee Myung-bak administration’s push to implement an admissions officer system, which aims to reduce the costly private tuition fees that many families currently shell out in an attempt to give children an edge on the college entrance exams administered by individual universities.

“Since the cost of registration is so expensive, less affluent students can’t afford it,” said Ryu Han-joon, a graduate of Goyang Foreign Language High School who is entering Georgetown University in D.C. this September.

There are other concerns as well. Yonsei University freshman Nam Tae-hyun, who participated in roughly a dozen model competitions, said that most of the programs are too similar.

“There are so many out there,” Nam said, “that they will become increasingly meaningless unless they make efforts to distinguish themselves.”

Other critics say they are a bit too incestuous, as many of the events are run by peers rather than professionals, diluting the value of the experience.


*Interns Oh Taek-hyun and Lee Kun-ho contributed to this article.