The circus, with a twist, rolls into town

The circus, with a twist, rolls into town 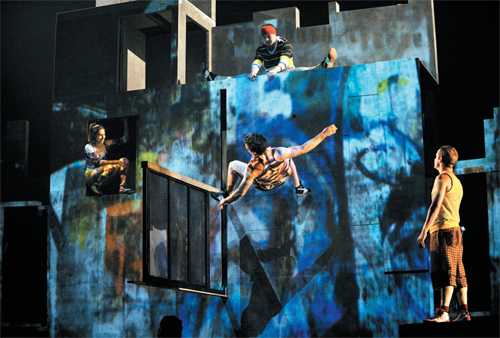 Artistic acrobatic movement is the focus of Cirque Eloize’s newest production “ID.” Provided by the organizer


The word “circus” typically conjures up images of lions jumping through flaming hoops, pretty women performing stunts on top of elephants and goofy clowns masquerading around a dirt-floor stage.

But don’t expect to see any of that when Cirque Eloize marches into Korea on Friday with the worldwide premiere of its new performance “ID,” which will be held in Incheon.

Cirque Eloize, regarded as one of the world’s leading new-age circus companies along with the famous Cirque du Soleil, is coming back to Korea, touting the theme “Speed, Spectacle, Special” with its latest show.

Founded in 1993, the troupe consists of artists and acrobats that perform cirque nouveau - or contemporary circus - shows. This rather new approach features dynamic acrobatic choreography, theatrics, comical performances, contemporary dance and music and state-of-the-art stage graphics rather than animal stunts and clown pratfalls.

Jeannot Painchaud, the co-founder of Cirque Eloize, graduated from Ecole Nationale de Cirque - or the National Circus School of Montreal - and has been involved in the circus business for over 20 years. He also has received many prestigious awards from around the world recognizing his talent.

The new show will feature the same artistic approach the troupe built its name on, Painchaud, who helped produce ID, said in a press release.

ID features 70 minutes of performances set to energetic music such as hip-hop and rock played out against dynamic, engaging backgrounds. The show puts particular emphasis on energy and has a distinct multicultural feel, featuring 15 performers from various parts of the world including Germany, Canada, Laos and the United States.

The performance will be divided into three main themes. The first act, called “Everyday Life in the City,” will depict energetic scenes set in an urban jungle. The second one, called “An Invitation to Freedom,” features flashy backgrounds and highlights the energy of the night. The third main scene, called “Our Own Freedom,” starts with a male-female dance battle.

ID, however, has a distinct connection with the country: Kim Jong-suh, one of Korea’s most well-known solo rock artists, helped with the music score for the performance. The premiere coincides with the Global Fair and Festival 2009 in Incheon, an 80-day event aimed at taking visitors into the future of the city and other areas around the globe.