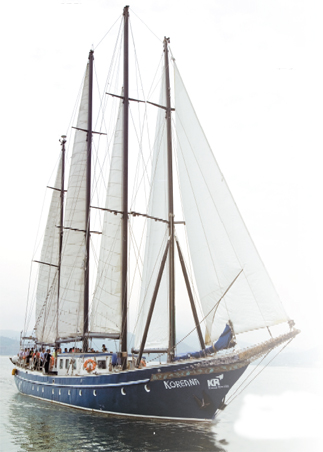 The Koreana, the only clipper in Korea, sets out to sea.

At Yeocheon Port in South Jeolla, a large sailing vessel with four 25-meter (27.3 yard) high masts sits docked in the harbor. At 39.6 meters long, 6.8 meters wide and 135 tons, it is quite an imposing sight. The name of the vessel is Koreana, and it is the only clipper in Korea.

The ship’s original owner was a member of the Mafia and based in the United States, an interesting fact that is likely to come as a surprise to most, even though it is well known throughout the Korean sailing industry.

The story of how the ship got here is even more intriguing. In 1989, a large clipper dropped anchor at Daedong Dockyard in Jinhae, South Gyeongsang. It had stopped over for a makeover that was to include an extension of the ship’s hull by about six meters and the addition of a mast. The clipper already had a rather glamorous interior with elegant French chandeliers and Italian furniture, so the work was being done to improve the visual appeal of the exterior.

At some point in the remodeling process, however, the dockyard needed to consult the ship’s owner on the work being done, but he was nowhere to be found. It turns out that the United States Federal Bureau of Investigation had charged the owner, a member of the Mafia, with drug trafficking and had sent him to jail. The FBI seized his property, including the ship, which was valued at 10 billion won ($8.18 million).

For the next six years, the ship sat unattended in the Korean port. As time went by, the ship became a burden for the Korean dockyard because it took up valuable space that could have been used for other ships in need of repair. The wharfage eventually increased to 1 billion won, but because the FBI and the owner seemed to have forgotten about the ship’s existence there was no one to pay the fees.

The dockyard eventually went through the process of acquiring the legal rights to the ship. But the story doesn’t end there.

When the dockyard acquired the ship, it was the mid-1990s. There were few 10-meter yachts in the country and even fewer people who could afford to buy a clipper. 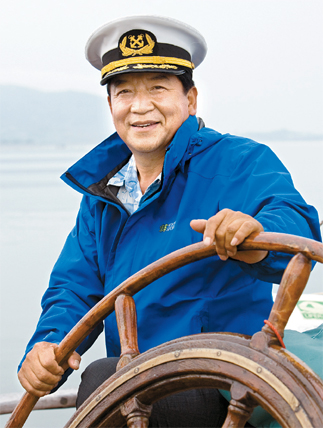 Jeong Chae-ho, the captain of the Koreana

Enter Jeong Chae-ho, a businessman from Yeosu, South Jeolla. He arrived on the scene in 1996 to purchase the ship and registered it with the Jeonnam Yacht Association.

Although Jeong refuses to reveal the price he paid for the ship, sources estimate the cost was around 1.5 billion won.

What he did say in a recent interview was that he had paid a considerable amount for the installation of a radar system and other equipment and the cost of legal fees in the U.S.

In the interview, Jeong also mentioned that he had received a 3 billion won offer for the ship from a wealthy man in Hong Kong in 2000, but that he had turned it down.

“The ship is now valued at 5 billion won at the least. If it were upgraded with an interior makeover, it would be worth even more,” said Lee Pil-seung, executive director of the Korea Sailing Federation.

“Though it was built more than 20 years ago, the clipper has stayed in good shape and is still a handsome vessel,” Park Gil-cheol, the manager of the Korean national yachting team, said. “It is still able to run at 13 knots with the wind.” The ship is known to have been built in the Netherlands in 1983.

What differentiates a clipper from a yacht is the length of the vessel and the number of masts it has. Ships with a length of over 60 feet (about 18.3 meters) and more than two masts are considered clippers. Because clippers are expensive to maintain and a large crew is needed to raise and drop the anchor, they are generally considered to be a ship for the wealthy. 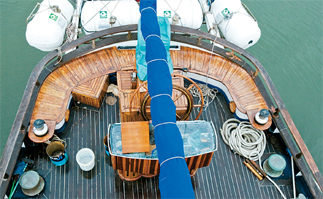 The interior of most clippers is also fairly opulent. The Koreana, however, has rather modest decor. Jeong remodeled the ship so that it could be used for student field trips to educate youngsters about the sea and sailing.

Instead of the leather furnishings, marble surfaces and extravagant wine cellar that might be found on a typical clipper, the Koreana has vinyl chairs and a kimchi refrigerator. The king-sized bed that might have accommodated guests aboard a luxury clipper has been replaced by a number of single beds for student travelers.

“I did my best to erase the traces of the Mafia,” Jeong said.

Since Jeong purchased the ship, the Koreana has not had many occasions to present itself, except at sailing festivals held in Japan from time to time. That could change with the recent revival of interest in yachting. The Koreana is frequently invited to serve as the mascot for maritime festivals and yacht races, which have steadily been increasing in number.

That’s sure to help offset the cost of keeping the ship in shape. 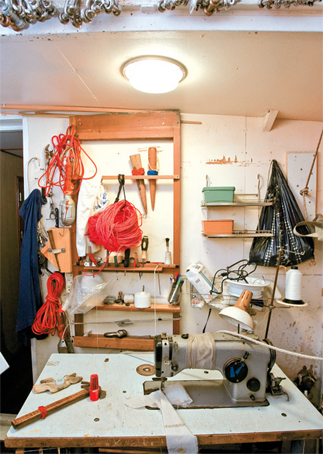 Jeong remade the ship’s interior so the ship could be used for educational trips.

“The ship’s yearly maintenance fees used to be about 150 million won. Considering that the Koreana only set sail two or three times a year, that was a cost of around 50 million won each time it went out to sea,” Jeong said.

He maintained the ship primarily at his own expense, but he did have some assistance from the Jeonnam Yacht Association.

Jeong, who was born in Yeosu in 1948, has vivid memories of his first encounter with a yacht while on a trip to Oslo, Norway, in 1974. “I was overwhelmed by the sight of a Russian clipper, which was over 100 meters long, and since then, I’ve dreamed of having a clipper in Korea,” Jeong said. Jeong currently serves as the president of the Korea Yacht School and the Jeonnam Yacht Association and is the chief organizer for the Yeosu International Tall Ship Festival.

His goal is to bring to Korea a grand clipper like the one he saw in Oslo 35 years ago. 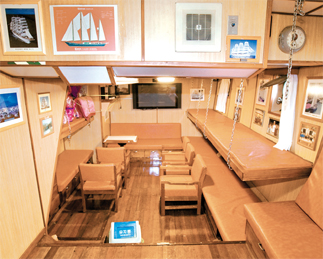 The cabin now has a number of chairs and single beds to accommodate student travelers. By Shin Dong-yeun

“Countries like India, Indonesia and Oman, not to mention advanced nations, have clippers that are over 100 meters long. It’s time for Korea to have one, too,” Jeong said.

A clipper of that size would cost about 100 billion won to build, so government participation would be necessary to bring such a ship to Korea, Jeong said.

“The Naval Academy or Maritime University should have a clipper for educational purposes,” he added. “Despite all of the advanced sailing equipment available to us these days, we still need a traditional ship so Korean students can learn the basics about nature and the sea,” he said.