Look at the big picture for results

Look at the big picture for results 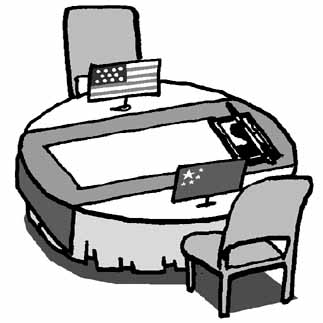 Confucius said that when one climbs a mountain, the world under the heavens looks small. Du Fu’s poem “Wang Yue,” or “A View of Mount Tai,” was based on this, and it goes, “I will climb to the highest mountain to see how small others are.”

In April 2006 at a dinner meeting at the White House, Chinese President Hu Jintao recited the phrase to then United States President George W. Bush. The press interpreted this in different ways, mentioning trade imbalance between the U.S. and China and the depreciation of the yuan. But journalists agreed that the dinner was only a small affair when one took a wider perspective.

The day before the summit, the Chinese president was invited to a luncheon by Boeing. The Chinese president quoted Li Bai’s poem “The Hard Road.” That poem goes, “The day when I sail through the wind and against waves will certainly come/ I will hoist a sail high and cross a big ocean.” The media accepted this recitation as his resolution to improve U.S.-China relations.

But Hu Jintao’s reference to the Li Bai and Du Fu poems can be interpreted as Hu’s will to lead China’s climb to the top. His will is coming true.

When Jiang Zemin visited the Blue House in October 1995, he too quoted a classical Chinese poem, “Shan Xing” by Du Mu: “A leaf with frost on it is more reddish than spring flowers.” Lee Young-ju, a professor of Chinese literature at Seoul National University, believes that the quotation contained a message of diplomacy. South Korea-China relations, which were three years old then, could be improved to the level of the long-standing China-North Korea ties.

It is an old tradition for Chinese leaders to quote classical poems in diplomatic settings. With appropriate quotation, they break the ice at meetings or send a message. Of course, most of all, Chinese leaders do so because they are proud of their culture and tradition.

The first session of the U.S.-China Strategic and Economic Dialogue finished last week in Washington, D.C. and was evaluated as a prelude to a G-2 era.

At the meeting, part of “Chin Hsin,” a poem by Mencius, was quoted. The only difference was that it was U.S. President Barack Obama who recited it, and therefore it was the English translation of the poem, not the original Chinese. But nobody blamed him for boasting. It showed an aspect of his diplomatic style, which is to respect others’ cultures.

The dialogue was successful, probably thanks to President Obama’s quotation. After all, both diplomatic relations and all human relations work in the same way.