Lee Min-ki revels in the art of acting

Lee Min-ki revels in the art of acting 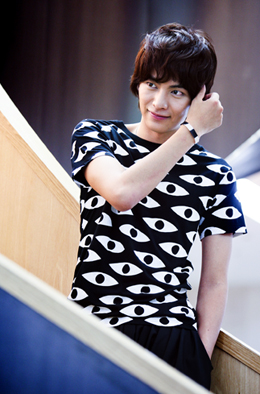 Actor Lee Min-ki, 24, who starred in the two recent Korean summer blockbusters “Haeundae” and “A Million,” seems to be enjoying his newfound popularity.

Lee, who started out as a model and later ventured into acting, has been doing both for the past five years.

He has appeared in TV dramas such as “Dalja’s Spring” and “I Really Really Like You” and movies, including “Romantic Island” and “Oishii Man.”

But it is through his two latest films that he has finally begun to gain a foothold as an actor.

In the Korean disaster film Haeundae, Lee plays Hyung-sik, a Coast Guard who rescues a female college student and eventually falls in love with her. As Hyung-sik, Lee projects an air of innocence and self-sacrifice. In the film A Million, however, Lee takes on the role of Cheol-hee, showing his gritty side as a hot-tempered Marine-turned-janitor who finds himself involved in a survival reality show where eight people are chosen to compete for $1 million in the Australian outback.

“I really appreciate all of the praise saying that my acting skills have improved, but to be honest I feel like I just guessed the answer to a question in an exam that I didn’t know but just happened to have gotten right,” Lee said.

“It wasn’t my talent, but the creative blend of the script, the production values and the outstanding cast that have made these films shine. They have pushed me further as an actor,” he added.

Because Lee is a former model, his acting talents may not be readily apparent to most, but the fact is he’s a hard worker who always strives to not only understand, but fully inhabit the characters he plays.

While preparing for his role as a member of the Coast Guard in Haeundae, Lee participated in a marine training program in Busan and a three-week rescue training program at the Seoul Fire and Disaster Headquarters Department. In order to embody the malnourished character he plays in A Million, Lee actually starved himself for about 10 days during the shoot in Australia.

“Although it was not a requirement that I undergo intense training or refrain from eating, I did it because I wanted to. I thought that if I didn’t, it would be hard for me to portray the characters I was playing,” he said.

Lee said that while working with veteran actors like Sul Kyung-gu in Haeundae and Park Hee-soon and Park Hae-il in A Million, he realized that good actors are not born that way, but become good at what they do through hard work.

“They taught me that it takes a lot of time and effort to become a good actor. For instance, Sul sat in his room all day to practice the Gyeongsang accent that he needed for his role in the movie. He kept practicing until he had perfected it.”

Lee said there was one more thing that he learned from his fellow actors. “Good people seem to make good actors,” he said.

Judging from his good natured personality and solid work ethic, the same could also apply to Lee himself.