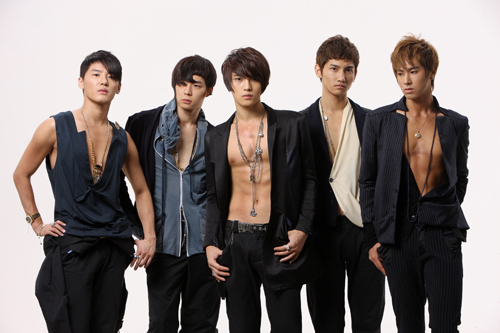 Early last month, the five-member Korean pop band Dong Bang Shin Gi, a.k.a. TVXQ, enjoyed one of the best moments of its career at the Tokyo Dome, which was filled with tens of thousands of fans shouting their praise.

In less than a month, however, it has faced the most critical moment of its career - a possible breakup - with a looming court battle against its management agency.

TVXQ made headlines early this week as three of its five members - Xiah Jun-soo, Hero Jae-joong and Micky Yoo-chun - took legal action against the group’s management agency, S.M. Entertainment, citing the unfairness of their contract as the reason for their action.

On July 31, the three applied for a provisional disposition, a move that would temporarily terminate the exclusive contract between the group and its management company for the duration of the dispute, arguing that the contract is akin to a lifelong agreement. They also say they have not received adequate compensation for their work.

Im Sang-hyuk, the attorney representing the three TVXQ members, said in a press release on Monday that according to the exclusive contract between TVXQ and S.M. Entertainment, band members cannot leave the company for 13 years, which actually translates to 15 years when their two-year mandatory military service is taken into consideration.

“This means that band members are attached to the company virtually until they retire from the stage, considering that entertainers have relatively short careers,” he added.

Another issue concerns the distribution of profits from the band’s record sales. According to the band’s contract, each band member is entitled to a payment of 10 million won ($8,120), but only when more than 500,000 copies of an album are sold. If fewer albums are sold, the band members get nothing. Im also said that when the contract was revised in February, it was written to ensure that each member would get only 0.4 to 1 percent of total album sales.

The three band members say they have demanded that the company resolve the contract dispute, but that they decided to take legal action after both sides failed to reach an agreement on the matter.

“TVXQ has received 11 billion won in cash [the total for all five members] since its debut in 2004 through July 2009 and was also provided with a luxury car,” S.M. Entertainment said in a written statement released later that day. “The contract has been revised and renewed five times by mutual consent, twice under the review of the Fair Trade Commission.”

As to why the other two band members have not joined in the action, a written statement from the three band members cited a “difference of opinion” between the two sides.

S.M. Entertainment alleges that the legal action is related to the cosmetics business in which the three band members are involved.

Meanwhile, the court battle has dealt a blow to the boy band’s fans at home and abroad. Upon hearing about the legal action, the band’s official fan club Cassiopeia, which has more than 800,000 members, immediately began collecting signatures fans for a petition against the possible breakup of the band. Over 23,800 signatures had been collected at Daum’s Agora Internet Forum as of 5 p.m. yesterday.

TVXQ debuted in 2004 with the album “Hug” and in the past five years has risen to stardom in Korea, Japan and other parts of Asia. It has sold over 2.7 million albums in Korea and over 5 million albums in Japan.

No matter how things play out in court, TVXQ and S.M. Entertainment seem to agree on one thing at least - that the dispute should not cause the band to break up.

All five band members appeared at Japan’s A-Nation Concert last Saturday and the Japanese media reported yesterday that the group will perform today at a fireworks festival in Tokyo as previously arranged.

But things won’t be easy for the entertainment company until the dispute is settled because other pop groups it represents, such as Girls’ Generation and Super Junior, are working under similar contracts as TVXQ.

And even if the dispute is settled, the question remains as to whether the band and the company can recover their trust of one another. The only sure thing here seems to be that things will just never be the same.