Our geography is not our destiny

Our geography is not our destiny 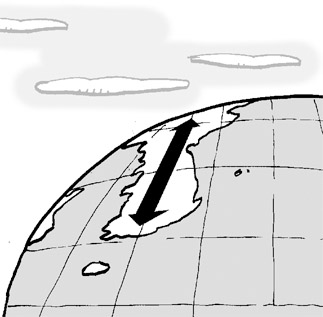 During the 1592 Japanese invasion of Korea, it took around two weeks for the Japanese military to reach the capital Hanyang, or present-day Seoul, after landing on the Korean Peninsula at Busan Port.

The Japanese military could traverse the peninsula in such a short period because the distance between ends of the peninsula is short. If that distance were longer, we could have had more time to prepare military strategies. But since Korea’s landmass is vertically challenged, the entire peninsula panics when outside forces invade.

Having been through many crises, Koreans respond swiftly when disasters occur.

A good example is when Koreans participated in a campaign to collect gold during the 1997 foreign exchange crisis. The problem is that such movement or sentiment does not last for long. Once a crisis is overcome, people immediately forget about it, as if it happened a long time ago.

Chinese people are quite different from us, as the country’s landmass is extremely large.

There are phrases from the Ming Dynasty that have been circulated among the people so widely that even today the Chinese quote them frequently. One phrase can be translated as “Do not be surprised by love or shame. I just watch flowers in the garden bloom and wither.”

That means one should not overreact to small incidents. The second sentence shows a leisurely attitude to watch flowers in front of one’s eyes bloom and wither without becoming excited or saddened.

One should perceive success and failure, glory and humility, and happiness and sadness in terms of the flow of history and move ahead toward the biggest and most important battle.

Stories of Korea’s successes and failures continue even today. These days, Korean companies are doing well. Samsung SDI has agreed to provide lithium-ion batteries to Germany’s BMW for its next-generation electric cars. In January, LG Chemical got the exclusive right to provide the same type of batteries to American automaker GM. In semiconductors, mobile communications, shipbuilding and the auto industry, Korean companies are making remarkable achievements.

The reason for these companies’ success is that they did not let the Korean Peninsula’s compact geography put a limit on their businesses, and extended an imaginary border in their minds.

In this sense, today’s true warriors of the Korean Peninsula are these companies. Because of their role, we need to ask companies to take responsibility for society. However, we must get rid of anti-business sentiment that only looks backward into the past, instead of looking forward into the future. Now is the time to watch these companies do their best and move forward.