A disaster film, five years in the making

A disaster film, five years in the making

A scene from the Korean blockbuster “Haeundae” portrays pandemonium as a massive tsunami slams into Busan. Provided by JK Film

The Korean blockbuster “Haeundae” has taken audiences by storm ? or perhaps it’s more apt to say by tsunami, which happens to be the main focus of the movie.

As of yesterday, the film had drawn an impressive 6 million moviegoers since its release on July 22.

Many critics and viewers attribute the film’s success to a gripping story line and its use of eye-catching advanced computer-generated graphics, which accounted for a big part of the movie’s 13 billion won ($10.6 million) budget.

The story is told through the human relations between various characters played by seasoned actors such as Sul Kyung-gu, Ha Ji-won and Park Joong-hoon, presenting audiences with a good mix of humor and touching, emotional scenes throughout the two-hour ride. 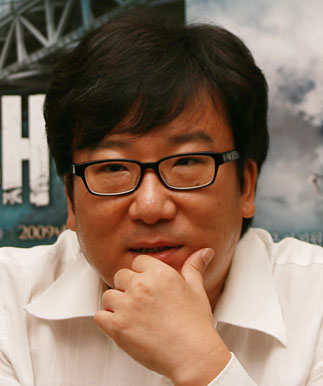 Director Yoon Je-kyoon, who also wrote the film, said he was staying in his hometown of Busan when he first heard about the tsunamis that hit Southeast Asia in December 2004.

“I conjured up a dramatic image of the million or so people who visit Haeundae Beach on holiday suddenly getting swept up in a tsunami, and that initial idea translated into this film,” Yoon said.

Yoon made his debut in the film world with the Mafia comedy “My Boss, My Hero” in 2001 before solidifying his position as a top filmmaker with productions such as “Sex Is Zero” and “Miracle on 1st Street.”

In an interview last month with the JoongAng Ilbo, Yoon talked about the process of making the film, the challenges he encountered and his thoughts about the movie’s main characters.

Q. It has been said that it took almost five years from the initial conception of the idea for the film to its completion.

A. Writing a script was as hard as making computer-generated graphics for a tsunami. To come up with the three “right” main couples for the film, I created stories for hundreds of potential characters for more than two years.

There are three couples that appear in Haeundae. The first is Yeon-hee, who makes a living by running an illicit sushi restaurant after losing her father in the tsunamis in Southeast Asia, and Man-sik, a widower who has a crush on Yeon-hee.

The second is Kim Hui, a geologist who warns of the tsunami barreling toward Korea, and Yu-jin, Kim’s ex-wife and a career woman who works at an ad agency for a big cultural event in Busan.

The last couple consists of Hee-mi, a charming student from Seoul who visits Haeundae on vacation, and Hyung-sik, a lifeguard who rescues and then quickly falls in love with Hee-mi.


What did you have in mind when creating these characters?

I wanted to avoid the over-redundant heroism that is often found in Hollywood disaster movies. In those films, the hero is always aware of the upcoming disaster and takes control of the situation quite easily. However, catastrophes like tsunamis aren’t something that can be dealt with so effortlessly.

Through the film, I tried to show how important and valuable human relationships are. The uncle of Man-sik, whom Man-sik detests, dies in an effort to save his nephew as the tsunami engulfs the whole city.

Hyung-sik sacrifices himself to save a man who looked down on him and even tried to take his girl away from him.

All I wanted to say was that we should value encounters with people. You never know what’s going to happen in life.

There’s quite an impressive scene where Yu-jin, on the verge of drowning inside an elevator, has what seems like her last phone conversation with her daughter.

For Haeundae, you spent about $5 million on computer-generated special effects with a Hollywood staff. Is there anything you learned from the experience?

The big challenge with computer-generated (CG) effects is depicting water. For Haeundae, I brought in Mopek, a leading CG company in Korea, to work with Hans Uhlig, who was the CG supervisor of Hollywood blockbusters like “The Day after Tomorrow” and “The Perfect Storm.”

Because the resulting contract called for technology transfer to the local company, I feel proud that I helped Korean CG technology take a big step forward.

Creating water with CG is very difficult, so most films go with night scenes where the water is dark and relatively invisible. However, in Haeundae, all CG scenes of water are shot under full daylight. The harder thing, however, was shooting the scene where people are swept away by a tsunami. No one knew how to shoot the scene, as it had never been done before here.

Instead of shooting the scene in Korea, which would have cost us about 1 billion won and taken more than two months, we did it in the U.S., where we filmed it with a 5 million won model helicopter installed on top of a large barrel in a garage. At first, I was skeptical [of the method] despite the Hollywood staff’s claim that movies like “Pirates of the Caribbean” and “Master and Commander” used the same method. Then I learned that it was quite true, as I had witnessed a similar process during the special effects shoot of “Terminator Salvation.” And look at our final product. Isn’t it amazing?

Special effects are difficult for sure, but they’re worth a try. I learned through making Haeundae that nothing in the world is impossible, and I have gained confidence that Korean disaster films can develop their own style.