Tak Tae-sik, 53, who runs an eel restaurant in Seongsu-dong, Seoul, occasionally visits Chuncheon, Gangwon, to see his sister. In addition to strengthening his relationship with his family, the visit gives him a chance to gaze out at the city’s wide lake and breathe in the clean country air. He is also happy to have the opportunity to indulge in dakgalbi, a spicy chicken stir-fry that is a Chuncheon specialty.

Unfortunately for Tak, getting there hasn’t always been easy. The roads between Gyeonggi and Chuncheon were always congested on weekends so he would begin and end his journey early in the morning or late at night to avoid the traffic.

Until now. With the opening of the Seoul-Chuncheon Highway last month, traffic is no longer a concern and the refurbished route runs through some of the most picturesque landscape in the country.

“I can get to Chuncheon in a short time, see my sister and her family and eat my favorite food,” says Tak, who regards Chuncheon as his second hometown.

The new route significantly reduces travel time between Seoul and the lakeside city. It used to take 100 minutes by bus to get from eastern Seoul to Chuncheon during the week and two to three hours on weekends and holidays. It now takes just an hour.

In addition, the train line that connects Cheongnyangni Station in northern Seoul with the Chuncheon city center will be open at the end of next year. The train, operating at a speed of 180 kilometers per hour (112 miles per hour), is expected to cut travel time between the two cities by 40 minutes, and the entire trip will take just an hour.

The highway connecting the Gangil Interchange in Seoul to Chuncheon Junction cuts through a lush and verdant swath of green rice fields, inviting lakes and mountain corridors.

Jara Island in central Gapyeong County houses one of the largest campgrounds in the country. Provided by the county

We set out on a recent morning to explore the areas along the new 61.4-kilometer-long route with our guide, Yu Jae-nam, manager of the technology team of the Seoul Chuncheon Highway Corp. Yu provided us with valuable insight into the highway’s construction and pointed out some notable attractions along the way.

As we started out, the long eight-lane highway spread out in front of us like a silky ribbon of dark water. After the Misa IC, the number of lanes decreased to six and the 1.5-kilometer-long Misa Bridge emerged onto our path. From here, we had a broad view of the Han River flowing under the bridge.

After passing the Namyangju IC, the apartments begin to fade, giving way to the mountainous landscape of the countryside. The Wolmun 2 Tunnel with its wild purple flowers on top looked like a stout flower pot bursting with color.

“It costs less to bulldoze a mountain, but we wanted to preserve the natural surroundings so we chose to build a tunnel instead,” Yu said. He told us tunnels and bridges cover 40 percent of the route.

Past the tunnel, the road traces a gentle curve around the mountains in its path. Yu said that although the company could have built a straight road fit for speeding, it chose instead to follow the landscape’s natural ebb and flow.

“We wanted to protect the natural surroundings as much as possible,” Yu said. 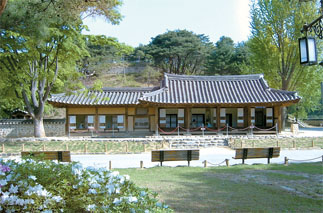 Joseon Dynasty scholar Jeong Yak-yong once called this home. Provided by the city of Namyangju

After the Hwado IC, the number of the lanes drops to four somewhere around Hwado-eup, Namyangju City, Gyeonggi. A little farther on, a huge cascade of water appeared on our right. At 92 meters high and 26 meters wide, Piano Waterfall is one of the largest man-made waterfalls in the world.

We passed the Geumnam Tunnel and came onto Seojong Bridge, which passes over the Bukhan River. On the water below, people were taking advantage of the bright summer day. Some were waterskiing, and others were lounging by the shore.

Between the Seojong IC and the Seorak IC, a seemingly endless wall of mountains rises up on either side of the road. Mount Yumyeong and Mount Jungmi, known for their beautiful fall foliage, stand like sentinels over the peaceful fields below.

We stopped for a short break at the Gapyeong Rest Area, one of the two rest stops on this route. The other is on the opposite side of the highway.

Just past the rest stop, the 2.2-kilometer Misa Tunnel opens its mouth wide, providing passage between Gyeonggi and Gangwon provinces.

The next stretch of road along the Balsan 1 Bridge produces some of the most beautiful scenery on the route.

The Hongcheon River emerges from under the bridge to be flanked by mountains that seem to rise up from its tree-lined banks. Snowy herons bob on the surface of the water before soaring away into the sky.

Our 40-minute ride began to wind down as we passed through the Balsan tunnels and Mount Palbong appeared like a folding screen along the side of the road, signaling the end of our journey.

For more information on the highway, go to www.schighway.co.kr. 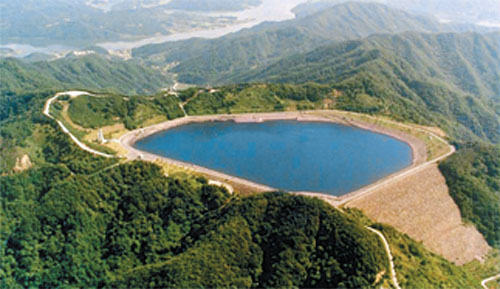 Homyeong Lake is a blue oasis in the midst of the country landscape.Provided by Gapyeong County


Cheongpyeong Lake in Gapyeong County stretches from Cheongpyeong to Gapyeong counties. It was formed when the Cheongpyeong Dam was built in 1943. The intersection of the blue sky, the green forest and the lake, which changes color as the seasons do, creates an atmosphere of mystery. Visitors can hike the trails leading through the valleys around the lake, go swimming, take a boat ride or just drive around taking in the gorgeous scenery. For information, call (031) 580-4669.

Along the riverside road that connects the dam to Gapyeong, the beauty of the Bukhan River unfolds. Homyeong Lake, which sits atop a peak, is a reservoir for a hydropower plant built in 1980. There are walking trails and observatory decks alongside the lake. A pavilion near the lake provides the perfect vantage point from which to take in the panoramic view of the Bukhan River and the valleys winding their way through the surrounding landscape. For information, call (031) 580-1217.

Yongchu Valley, which extends from Mount Yeonin to Yongchu Waterfall, is a 10-kilometer long stretch of green. For information, call (031) 580-4669.

Yumyeong Valley around Mount Yumyeong in Seorak-myeon, Gapyeong, also boasts a stunning view. The valley is home to waterfalls large and small, which cool the hot summer air and provide a pleasant place for a picnic. For information, call (031) 589-5487.

Jara Island in Gapyeong has one of the biggest campgrounds in the country. It offers convenient facilities such as hot showers, lodges and camping trailers. For information, call (031) 580-2700 or go to http://jarasum.gp.go.kr.


Get a glimpse of Mongolian culture and arts at the Mongol Culture Village located within the Sudong Tourist Resort in Namyangju, Gyeonggi. There is an indoor exhibition displaying traditional Mongolian clothing, musical instruments and personal ornaments. Outside, there are several examples of the large portable tents known as ger or yurts that used for housing by Mongolians and the people of Central Asia. Folk performances by Mongolian performers are held twice a day from March to December on the resort’s stage. For information call (031) 590-2793, 8018.

At Kofic Namyangju Studios near the Paldang Dam, film fans can explore the sets that form the backdrop for Korean films such as “Joint Security Area,” “Silmido” and “Chihwaseon.” There is a small special effects studio and displays of costumes and props from the films. For information call (031) 5790-605, 671.

In Joan-myeon, Namyangju, you can follow the life of Jeong Yak-yong (1762-1836), a Confucian scholar who sought practical application of academic theories during the Joseon Dynasty (1392-1910). Jeong invented a crane that assisted with construction of the Hwaseong Fortress in Suwon, Gyeonggi. A shrine and a memorial hall dedicated to the scholar sit next to the house where he was born. The view of the Han River and the weeping willow that presides over Jeong’s tomb are spectacular. For information call (031) 590-2481 or 2837.