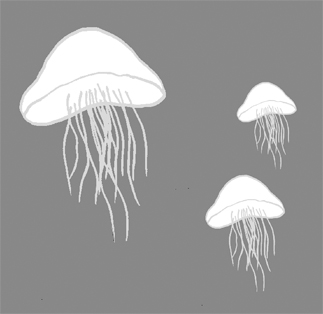 In Greek mythology, it was said that there were three sisters called the Gorgons among the monsters created by Gaia, the mother goddess who personified nature itself. The youngest of them, Medusa, was known for her beauty. She had a tryst with Poseidon, the god of the sea, inside the goddess Athena’s temple of worship. As punishment from Athena, Medusa was given hair of living, venomous snakes and a visage so hideous that all who looked upon her were turned to stone. The hero Perseus, however, avoided this fate by only looking at Medusa’s reflection in his highly polished shield, and then beheading her.

Jellyfish with wavy tentacles bear a resemblance to Medusa’s head. Medusa, in fact, happens to be Latin for jellyfish.

Jellyfish, corals and sea anemones are cnidarians, which have a single opening into the body which acts as both the mouth and anus. When their tentacles brush against their prey, thousands of tiny stinging cells explode and launch poisonous barbs into the victim. Jellyfish often sting people, resulting in sharp pain, and possibly leading to dyspnea, muscle paralysis or heart attack.

In the medieval era, cnidarians were considered plants. People thought that cnidarians existed at the boundary between animals and plants through the 18th century. It was not until the 19th century that they started to be considered animals. Jellyfish appear in “Jasaneobo,” the first Korean fisheries science book written by the scholar Jeong Yak-jeon. He used the expression “legs,” and grouped it as an animal.

The life cycle of jellyfish is diverse. Jellyfish progress through a number of forms, including a tiny free-swimming planula, a flower-shaped polyp that attaches itself to a solid surface, and a pelagic medusa. The segmented parts of the strobilating polyp, or strobila, develop into incipient medusae that eventually break loose and become free-swimming young jellyfish of their own.

Jellyfish have become a matter of concern on the south coast. The National Fisheries Research and Development Institute estimated that damage from jellyfish will exceed more than 300 billion won ($245 million) a year. They harm swimmers and cause substantial damage to fishing operations by ruining fishing nets. They also make it difficult to obtain cooling water for power plants. Jellyfish cause great distress in the Mediterranean, the North Sea, the Baltic Sea, the Caspian Sea and the Gulf of Mexico. The major culprits behind this phenomenon are a rise in seawater temperatures due to global warming, eutrophication due to land-based pollutants and the overfishing of natural predators of the jellyfish. This is a man-made disaster.

Discharging filefish known to prey on jellyfish is not an adequate solution. However, it makes us feel sorry that we will not have a 21st-century Perseus to save the sea from its Medusa.