Step into the future of urban living in Incheon

Step into the future of urban living in Incheon 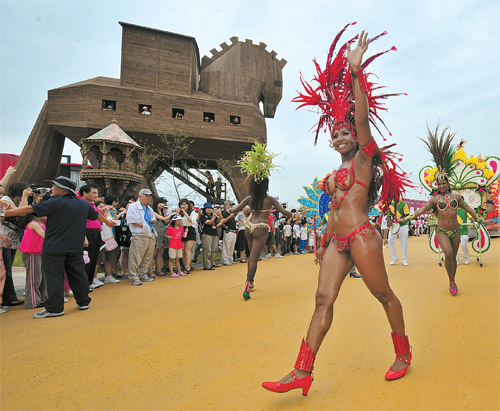 Brazilian dancers in the “World Carnival Parade” at the Global Fair and Festival 2009 Incheon walk next to a wooden replica of the Trojan Horse and greet the public yesterday on the opening day of the festival in Songdo, Incheon. The festival will go on for 80 days until October 25. [NEWSIS]

Incheon has been rapidly transforming itself in recent years into a global city that aims to become a hub for finance, logistics, education and culture in Northeast Asia. To achieve this goal, Incheon has aggressively sought out various development plans.

One of the biggest projects Incheon is undertaking is the development of three large free economic zones: Songdo International City, the site of an innovative urban development plan incorporating eco-friendly technologies; Yeongjong Aeropolis, the home of Incheon International Airport, which aspires to become a global logistics hub; and Cheongna Leisure City, which aims to become a center for research and development for Korea’s rapidly growing robotics industry.

These developments are aimed at improving the quality of life of Incheon residents. Innovations such as a state-of-the art medical care system that allows residents to monitor their health from home will keep people healthy and homes powered by solar energy will help preserve the environment. In addition, the city has formed partnerships with foreign investors to bring the best in the arts and culture to Incheon’s shores. One such agreement brings Broadway to the heart of Incheon. Another with the city of Milan brings Italian design, visual art and fashion to the heart of the Korean coasted city.

The Global Fair and Festival 2009 Incheon, Korea, is an 80-day journey that will put all that the city has to offer on display.

The entire city will transform itself into a massive exhibition and entertainment area. The main festival grounds in Songdo International City present a model for a future filled with digital technology and robotic engineering.

For the duration of the festival, scholars, corporations and policy makers will come together to explore and exchange ideas for improving urban competitiveness.

There will also be plenty of entertainment for people of all ages, including digital art displays, visual art exhibitions, multimedia works and performances.

The slogan of the festival is “Lightning Tomorrow,” which puts the spotlight on ways to build a better and brighter future through creativity and innovation. 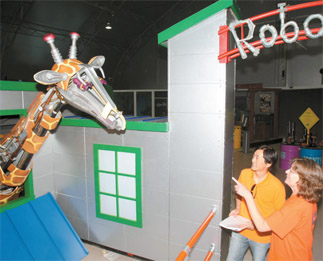 You could go to the beach or to an amusement park this summer. Or you could do both in the same day.

The Global Fair and Festival 2009 offers a break from the summer heat.

At the Advanced Technology Zone, the Robot Science Pavilion will show the future of robotics in Korea and around the world.

It’s hard to talk about the future and not mention robots. The Robot Science Pavilion not only helps visitors explore the world of robotics technology but will also expand imaginations with various robot displays.

The Robot Zoo is sure to turn some heads. Large robotic animals greet visitors at the zoo’s entrance, and the face of a large giraffe with eyelids that open and close while its head turns from side to side is sure to be memorable. There are other animals and insects in the zoo, including a rhinoceros, a grasshopper, a bat, a gigantic squid and a chameleon. Visitors will be able to actively control the robots.
The zoo is not only entertaining for young visitors but will also open their minds to a new world of robotic engineering.

The pavilion has a stage for a robot competition where over 1,041 teams will compete. Robots will battle each other in a super survival match on one stage. On another, humanoid robots compete in a mechanical football match. 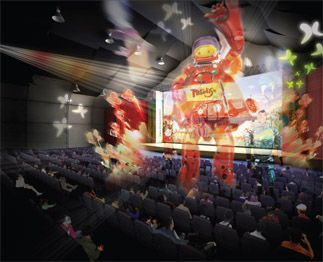 At the theme theater City Paradiso, a film with the same name plays on Korea’s largest IMAX screen. The 10-minute animated film not only shows Incheon in 2050 in 3-D on the 1,000-inch screen, but also takes viewers into the heartwarming story of a young girl and a firefighter named Paradiso who saves not only the city but also the young girl.

The Global City Pavilion in the City-Enterprise Zone shows the countries of the world.

Visitors can see crystal-embedded baseball caps manufactured by a New York company or tee off at the Honolulu booth.

At the Shizuoka display, visitors can see a man-sized model of a robot from the animated film “Gundam” and various products from the Japanese city including green tea.

Other cities participating in the pavilion include Yanbian, Qingdao and Harbin from China; Atlanta and San Francisco from the U.S.; Kitakyushu, Kanazawa and Hamamatsu from Japan; and Tunis and Kinshasa from Africa.

There will be a potter from Nepal, a huge Lego exhibition that recreates major buildings like the old Seoul Station and a man-sized replica of a character from the “Star Wars” movies.

The Environment-Energy Zone is filled with green and includes a floral exhibition and displays featuring eco-friendly technologies such as wind-powered generators developed by private companies like Doosan and Hyosung and Korea’s first hybrid vehicle produced by Hyundai Motor. 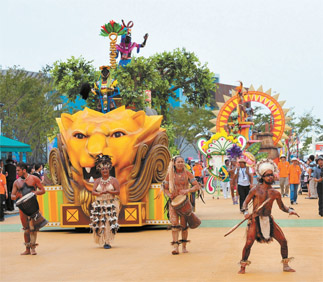 The World Culture Zone draws the largest crowds with displays from different countries. There’s a parade troupe from Brazil that heats up the stage with Latin music, a Vietnamese water puppet performance and performances by hip-hop groups.

At one booth, a woman from Africa braids hair, at another an Indian women do henna tattoos.

At the Lost City Pavilion, there are artifacts from ancient civilizations from the Incas to the Egyptians as well as ancient China. 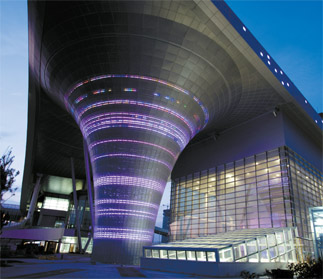 Tomorrow City offer visitors an interactive experience of what life will be like in “ubiquitous” Incheon in the year 2020.

Tomorrow City not only has a futuristic interior but there is an interactive 3-D live show where animated characters are brought to life on a screen that communicates with visitors in real time.

Visitors will also have a chance to glimpse “U-City,” which will be equipped with intelligent bus stops, streetlights and pedestrian crosswalks.

The world premiere of Cirque Eloize’s new performance “ID” will run through Oct. 25 at the BigTop Theater in Songdo International City, Incheon. The group, which has been compared to Cirque du Soleil, has gained international acclaim with daring acrobatics, heart-pounding music and spectacular special effects.