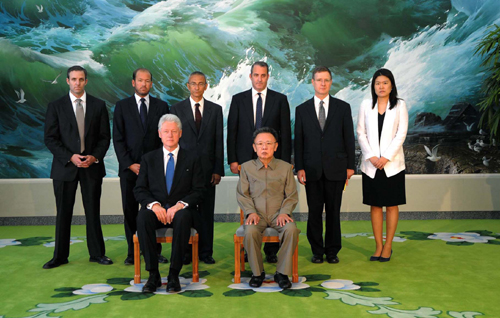 Former U.S. President Bill Clinton’s surprise meeting with Kim Jong-il has turned the standoff into a dialogue between the United States and North Korea. While the ostensible purpose of the trip was the release of the two journalists detained in North Korea for the last four and half months, and the U.S. government declared the journalist problem and the impending political questions separate, North Korean media reported that a wide range of issues of mutual interest had been discussed, and Clinton conveyed to Kim a verbal message from President Obama.

Such a state of affairs allows the general public to draw an analogy with former President Jimmy Carter’s lightning meeting with Kim Il Sung in 1994 just two days after North Korea declared its intention to withdraw from the nuclear nonproliferation treaty. It thus looks possible that the United States, along with its allies, will soon start to negotiate with North Korea, offering a comprehensive package as a quid pro quo for dismantling the nuclear and missile programs. Even a visit to North and South Korea by Obama himself could be envisioned.

Looking back on the history of negotiations with North Korea over the last sixty years, we can envision what the future could hold for the final results of the ongoing situation. The cyclical character of brinkmanship and salami tactics of North Korea will repeat the pattern of tensions and compromises. The newly starting negotiations are supposed to see a breakthrough when Kim Jong- il dies, perhaps in one to five years. We witnessed the death of Joseph Stalin, which augured well for the conclusion of the Korean armistice in 1953, and soon after Kim Il Sung’s demise was the signing of the Geneva Agreed Framework in 1994.

The North Korean counterproposal to a comprehensive package, on the other hand, will most probably include freezing, not dismantling, nuclear and missile programs, recognition of the hereditary rule to the third generation and energy and food supply. With a view to obtaining a strong guarantee, North Korea will demand maximum expenditure of U.S. taxpayers’ money in implementing a final agreement, whereas the U.S. will wish to mobilize as much money as possible from its allies. In implementing the Agreed Framework, the United States gained support from South Korea, Japan, the European Union and a number of member states of the Korean Peninsula Energy Development Organization.

As a result of rigorous oversight practiced by the U.S. Congress, the Clinton administration was criticized by its allies as well as domestically of its “nickel and dime diplomacy,” coaxing funds from friendly countries in implementing the agreement to send light-water nuclear reactors to North Korea. At that time, the United States prepared two sets of options in preparation for the breakdown of the implementation of the Agreed Framework: a walk-away option and a military option. While the military option proved unlikely, considering unimaginably disastrous consequences, the walk-away option became a reality, leading to the suspension of the project.

What the allies have now in mind seems to be what they call “cooperative threat reduction” and “global partnership.” The origin of these programs was the Nunn-Lugar act of the early 1990’s, that would buy up nuclear weapons and denuclearize several republics of the former Soviet Union, which bore no financial burden in dismantling their nuclear arsenal. The programs arranged the employment of their nuclear scientists and technicians. The problem is that North Korea would not accept the programs, because it would think that dismantlement is not its own business. From time to time, the reports have it that Libya is discontent with similar programs it accepted as the implementation falls short of expectations. This is another factor that North Korea is calculating.

The U.S. and China seem to have exchanged some sort of overarching rapport at the recent strategic and economic dialogue in Washington about common preparedness for a Kim Jong-il’s North Korea. Denying categorically any possibility for such a consensus, China claimed that it has turned down for several times the U.S. proposal for consultation about joint preparation for turmoil in the aftermath of Kim’s passing, let alone a sudden collapse of North Korea.

Commander of the Combined Forces Command General Walter Sharp stated that Korea and the U.S. have a contingency plan in preparation for any scenario, from the best to the worst developments. Japan has studied for decades such a contingency plan to share with the U.S. China also responds that it has its own plan that can assure its people despite the scenario. Since the nature of such plans are confidential and unknown to other stakeholders, some temporary confusion would be unavoidable in the event of a sudden regime collapse in North Korea. The individual military plans should be complemented by civilian initiatives. One of the most critical areas requiring preparation is a massive influx of refugees from North Korea.

Under these circumstances, the options South Korea may take appear quite clear. The nation that has successfully accomplished economic development and democratization in a short period of time still has two major tasks: to build an advanced state and to achieve reunification with North Korea, which claims to have a “great, strong, prosperous state.” The transition from unipolarity into bipolarity, or G-2, is evident and will turn more decisive around the Korean peninsula than in other parts of the world. South Korea has to intensify its efforts to make its ideas known to the U.S. and China, so that Korea’s interests with respect to reunification and advancement of the country are reflected.

Designed and arranged by Goldman Sachs, along with international financial institutions, the comprehensive package would have commercial investment into North Korea. The package should promise vested interests to initial investors. China’s involvement in North Korea’s economy is already high. The higher South Korea’s rating in economic recovery is, the greater the demand for a lion’s share of the contribution would be. South Korea has to make a delicate calculation on when, how, and how much it can pay for the management of the division of country, the reunification process, and rehabilitation after reunification. This does not necessarily mean that South Korea also has to practice its version of “nickel and dime diplomacy” but to design an appropriate way to maximize the effects of investment.

Whichever comes first, Kim Jong-il’s death or Kim Jong-un’s ascent to power, North Korea will endure sanctions imposed by the UN Security Council, and repeat nuclear and missile tests as the situation dictates, in an effort to have an advantage in negotiation with the United States. North Korea’s salami tactics show that it is apt at exercising veto powers even though all other parties also have theirs. The United States has provided North Korea with hundreds of thousands of tons of food and heavy fuel oil in an effort to induce North Korea to abandon its nuclear ambition. The U.S. released the funds frozen in Banco Delta Asia for North Korea to take out and deleted it from the list of states sponsoring terrorism even while knowing of its illegal acts such as counterfeiting money, forging cigarettes, and trafficking drugs.

The vicissitudes of dialogue with North Korea, no mater whether bilateral or multilateral, were always intermittent and ephemeral. From Red Cross talks to economic cooperation committee meetings, North Korea had agreed to and suspend at any time it deemed necessary. Now the six-party talks may be over, and a new formula could emerge. This is all the more natural unless a NATO-type permanent regional security arrangement is in place in Northeast Asia.

The most feasible scenario, therefore, is a very uneconomic model to commence a brand new peace project in other locations in North Korea, and thereby prevent or delay the possibility of war indefinitely. Only when such a project has some success, could we return to and revitalize the existing or suspended projects in Gaeseong, Geumgang-san, Kumho (light-water reactors), Rajin-Sunbong, and elsewhere.

The writer is a professor emeritus at the Institute of Foreign Affairs and National Security.