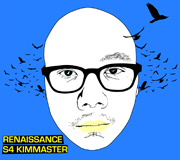 Kim Master has been dominating the music scene in Hongdae for many years, and more than a few fans have randomly caught a glimpse of him knocking back a drink in the area when he’s not performing.

The local musician’s latest release, “Renaissance,” contains plenty of new material to get your feet tapping as well as an ample number the hits that made him famous. Renaissance is technically Kim Master’s fourth album, but it’s the first one released under his own name, as the first three essentially were compilations with other musicians as well. It features 21 tracks divvied up on two discs. The first one, called “New Songs,” includes his latest folk and blues tracks. The second disc, called “Best Songs,” is filled with hits from the first three albums, in which he won over fans by exploring his personal insights on life. Kim’s success can be attributed to his hard work and energizing live hall performances, which he’ll continue doing this year in numerous venues around Seoul during his 2009 Summer Tour.