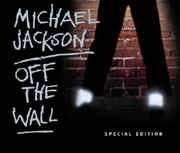 Before “Bad,” before “Beat It” and before “Thriller,” there was “Off the Wall.”

It was 1979, and with his fifth solo album Michael Jackson was out to prove that he could make the transition into the decade he would ultimately define.

Off the Wall has Jackson’s songwriting debut, the dance masterpiece “Don’t Stop ’Til You Get Enough,” and nine other exciting tracks that point the way to his future as the King of Pop.

The echoes of Motown are still present on the album, but they’re growing faint as Jackson strikes out on his own. The results are still staggering, from the irresistible “Workin’ Day and Night” to the buoyant “Rock With You” and the incomparably funky title track.

This Korean reissue of a special edition that first came out in 2001 also contains snippets of interviews with songwriter Rod Temperton and producer Quincy Jones that offer little more than a tantalizing peek behind the scenes. The two demo versions of the album’s Jackson-penned hits are stunningly listenable, proving that it wasn’t just the slick production. Jackson was the real thing.