A cloudy reception for a new plaza

A cloudy reception for a new plaza 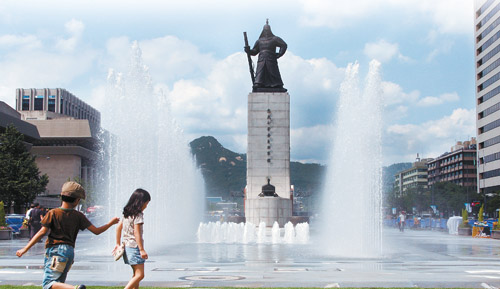 Children play in a water fountain in Gwanghwamun Plaza in front of the statue of Admiral Yi Sun-sin in central Seoul. [JoongAng Ilbo]


The imposing statue of Admiral Yi Sun-sin stands over Gyeongbok Palace like a staunch defender of the road leading to Gwanghwamun, the palace’s historic front gate.

Set against the backdrop of Mount Bukhan and the blue sky, with the presidential Blue House sitting placidly in the distance, the complete image is one of the most iconic in the landscape of the capital city.

The area behind the Yi statue has gotten a drastic makeover aimed at recreating a piece of Korea’s past. The finished product opened to the public on Aug. 1.

The unveiling of Gwanghwamun Plaza in central Seoul has already drawn a large number of visitors. According to data from the city government, Gwanghwamun Plaza had approximately 180,000 visitors on opening day alone and a total of 850,000 in the period between Aug. 1 and 6.

But while most have welcomed the renovation, some have grumbled about the lack of safety in and around the plaza and the possibility that the new area will become a hotbed for protesters.

Reconstruction of the plaza was undertaken not only to give the area an aesthetic upgrade, but also to restore it to its original state prior to the Japanese colonial era (1910-45).

In a Seoul city survey conducted when project planning began, 62.8 percent of respondents reacted positively to the idea of returning the plaza to the way it was during the Joseon Dynasty (1392-1910) and removing traces of the Japanese colonial era.

The remaking of Gwanghwamun Plaza and Sejongno, or Sejong Boulevard, is as complex as the history behind it.

Sejong Boulevard, which leads to Gwanghwamun and Gyeongbok Palace, was laid down in 1394, when the founder of the Joseon Dynasty, Yi Seong-gye, had the palace built. The width of the road, estimated at between 51 to 53 meters (167 to 173 feet), was three times the usual width of other Joseon era streets.

During Japan’s colonization of Korea, the Japanese built its Government-General Building on the grounds of Gyeongbok Palace, dwarfing the palace in the process, and Gwanghwamun was relocated within the palace grounds.

The gate burned down again during the Korean War and was reconstructed during the Park Chung Hee administration (1963-1979).

The Korean government demolished the Japanese Government-General Building in 1995.

An artist’s rendition of the stone flower planters that are to be placed along the edge of the plaza by the end of September. [YONHAP]

The plan to recreate Gwanghwamun Plaza gained approval in 2006. Construction began in April 2008 and the plaza, measuring 557 meters long and 34 meters wide, was completed after 15 months.

A total of 29 gingko trees that had lined Sejongno since the early part of the Japanese colonial era were removed in an effort to root out the remaining traces of Korea’s painful past.

Fourteen of them were replanted near Simin Yullin Madang, a park near the Ministry of Culture, Sports and Tourism in central Seoul, and 15 were replanted in front of the Central Government Complex.

A day after the official opening of the plaza, the Seoul Metropolitan Government announced plans to restrict protests or activities that could lead to protests. The law stipulates that loudspeakers are to be used only in limited areas and makes it illegal to block visitors from passing.

“Gwanghwamun Plaza is located near several government buildings and foreign embassies and therefore it is necessary to keep the noise level to a respectable level,” said Lee Hae-woo of Seoul’s road management office.

The city’s current plan is to allow only those events that do not interfere with the passage of people, mostly exhibitions.

“Even if event organizers need microphones for an event, we will not allow more than one microphone to be used,” said Lee Sun-young, the manager of the plaza management team of the Seoul Metropolitan Facilities Management Corporation.

The area in which events can be carried out is limited to the 1,751-square-meter space in front of the Sejong Center for the Performing Arts, or roughly one-eighth of the entire plaza. The cost of renting the space is expected to be set at 17,500 won ($14.30) per hour.

The announcement of the new regulations was not well received by several municipal politicians and members of some civic groups. Three days after the plaza opened, 20 people gathered on the plaza for a press conference in which they stated that the new law limits people’s freedom of speech and other basic rights.

Within 20 minutes, 60 police officers had arrived on the scene and 10 of the 20 participants were apprehended.

“The press conference was held in accordance with the new law, but the organizers failed to notify the city of their plans in advance,” said a Jongno police department official.

Meanwhile, the public reaction to the events that unfolded during the press conference and the manner in which the city has been handling the matter has been mixed.

“Gwanghwamun Plaza is an open space for everyone to enjoy, but that is not possible when specific groups hold large-scale protests,” said Kim Byung-chul, a 34-year-old accountant who was visiting the plaza with his family. “I believe Seoul city’s intention is to prevent the new plaza from turning into Seoul Plaza.”

Seoul Plaza was the site of candlelight demonstrations against the government’s decision to resume U.S. beef imports last year. The plaza was at the center of conflict again following the death of President Roh Moo-hyun, when mourners lined up to pay tribute to him were denied access to the plaza’s interior.

Kim Tae-soon, 54, an office worker from Incheon, added: “Gwanghwamun Plaza is a landmark in the heart of the country. If large-scale protests are held, it could cause traffic congestion and make it inconvenient for others, among other problems.”

But there are those who do not agree with the way city officials and the police are handling the matter.

“It is true that we still lack a culture in which peaceful protests are carried out, but that doesn’t mean that it is fair for the government to block freedom of speech,” said Cho Dong-shin, a 38-year-old office worker.

Although city officials seem prepared for protests in and around Seoul Plaza, they do not seem to have done enough to protect visitors to Gwanghwamun Plaza. With students on summer break and vacation season in full swing, children and families have stopped by to splash around in the fountains installed in the new plaza.

But a recent incident illustrates the need for stronger safety measures. A taxi drove about 20 meters onto the plaza on Aug. 2, according to media reports. The incident could have inflicted serious injuries on plaza visitors, some say.

The curb, which is 15 centimeters high, is the only thing separating visitors from traffic. While the incident did not do any damage, it does expose a serious flaw in the city’s construction of the plaza.

To remedy the problem, the city has installed safety workers who warn and alert people from getting too close to the edge of the plaza. These safety workers, who are part-time city employees, have been placed at 50-meter intervals along the plaza’s edge since Aug. 5, with their numbers increasing from 30 to 100 in just three days.

“The safety workers are helpful, but it does seem a little bit dangerous to have a large number of visitors, especially children, in the plaza without stronger safety measures,” said Lee Hyung-joo, a 39-year-old businessman who was visiting the plaza with his son on Friday evening.

“It’s nice what the city has done, but yes, it does seem a little chaotic here with a lot of people and no barriers to protect visitors from passing traffic,” said Jung Joo-hyun, a 32-year-old office worker.

On Monday, the city announced the edge of the plaza would be temporarily surrounded by 670 rectangular stone blocks measuring 20 centimeters high and weighing 135 kilograms each.

“We have stationed volunteers along the edge of the plaza, but have also placed large stone blocks along the plaza’s edge,” said Yoon Chul-seob of the plaza management team at the Seoul Metropolitan Facilities Management Corporation.

“We still have about 100 volunteers stationed around the plaza and will add stone flower planters measuring 80 centimeters high by the end of September.”