The Korean Quasimodo is back in popular masterpiece

The Korean Quasimodo is back in popular masterpiece 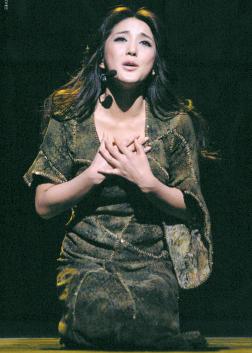 Choi Sung-hee has won numerous awards for her performance as Esmeralda.


It was the mid-1990s and Luc Plamondon was at the apex of his career, reveling in the success of a musical he co-produced with French composer Michel Berger called “Starmania.”

But the Canadian lyricist was having trouble coming up with a concept for his next project. Leafing through a biographical dictionary for inspiration, Plamondon plowed through the first 16 letters of the alphabet without much success. And then, near the end of the notable names listed under the 17th letter, his eyes fell upon a picture of Quasimodo, the deformed hunchback of Victor Hugo’s 1831 classic novel “Notre-Dame de Paris” - also known as “The Hunchback of Notre Dame.”

Bingo, he had his subject material. Plamondon quickly set out to create an ambitious stage piece with composer Riccardo Cocciante based on the story. The resulting musical, which carried the same name as the book, was first shown in Paris in the fall of 1998, where it was met with immediate success.

The French-Canadian troupe had similar results in Korea years later, with shows in 2005 and 2006 attracting 190,000 people in all - a significant number in the musical industry. 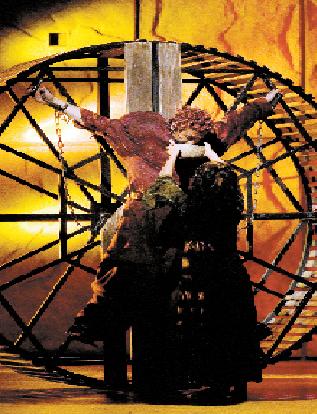 Based on that success, NDP Korea decided to present the musical in Korean.

“The performances by the original French cast received great response from the Korean fans, so we thought of presenting the same piece in Korean,” said Julie Kim of NDP Korea.

The idea was simple: stick to the story and use the same songs and dance routines but present the musical in Korean so that people here can understand and feel the emotions of the characters on stage.

The Korean version kicked off in 2007, and it was a resounding success, drawing large audiences and winning numerous awards.

After a slew of shows since then in Seoul, the musical is back on stage here at The National Theater of Korea until Aug. 27.

The cast features members of the original Korean lineup from 2007 as well as some from 2008. There are a few new faces as well, including movie actor Seo Tae-hwa.

“This year, the cast is a mix of people who were here when the project first launched to people who just arrived and are getting used to their characters,” said Kim Su-yong, who plays the poet Gringoire in the musical.

The show is full of impressive stage props such as enormous bells that weigh over 100 kilograms (220 pounds) each, most of which the French team left behind. At the same time, acrobatic dancers spin and swirl, creating powerful and exciting moments on stage.

But with seven main characters, 54 songs and no spoken lines during the two-hour performance, it can be difficult to reach the audience - at least at first.

“It’s a long musical with a lot of songs,” said Im Ho-jun, who plays the role of Clopin. “But we have fans that come to shows two or three times a year.”estyle@joongang.co.kr

Notre-Dame de Paris runs until Aug. 27 at the Main Hall Hae at The National Theater of Korea, central Seoul. Shows are staged at 8 p.m. on weekdays, 3 and 7:30 p.m. on Saturdays and at 2 and 6:30 p.m. on Sundays. There are no performances on Mondays. Head to Dongguk University Station, line No. 3, exit 6.

For more details, check out www.ndpk.co.kr. Shows will also be held at the Seongnam Arts Center from Sept. 1 to 12, near Imae Station, Bundang line, exit 1.