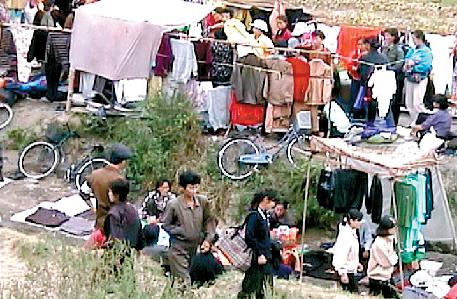 A market in Cheongjin, North Hamgyong Province. The quality of the picture is low because it had to be taken in secret. [JoongAng Ilbo]

The following report has been written with the assistance of Dongguk University’s North Korea research center. A total of 30 North Korean defectors were interviewed in-depth for this article. All of their names have been changed out of consideration for their safety.

North Korea observers have pointed out that recent provocations by Pyongyang, in the form of several missile tests and the country’s second nuclear test, are meant to rally support for reclusive leader Kim Jong-il, whose health has been in question since he was reported to have suffered a stroke last summer, while laying the groundwork for a possible succession by one of his sons, widely believed to be Kim Jong-un.

Apart from going to great lengths to display its military might, the government has also been trying to crack down on the growing number of private markets that have mushroomed within the country, which are seen as a potential threat to the state. Nevertheless, experts say that despite the government’s efforts, the markets and the resultant underground economy have become the most effective way of meeting the daily needs of ordinary North Korean citizens, which the public distribution system for food and supplies has failed to do.

The markets have also given birth to a cadre of wealthy businessmen. 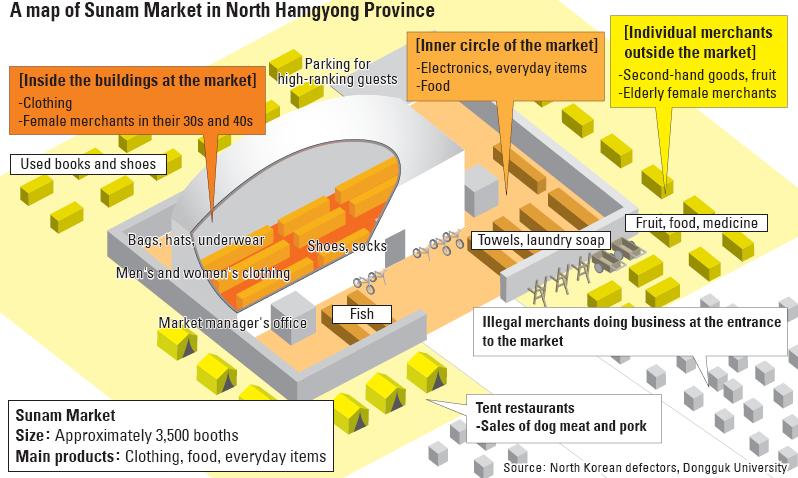 “In the North there are eight wholesale markets and about 300 retail markets,” said Dr. Hong Min, a North Korea specialist at Dongguk University who has visited some of the markets himself. “North Korea is at a stage where the markets and the ruling system coexist.”

Of the eight wholesale markets, six are located near the North Korea-China border, with ports nearby that give Chinese businessmen easy access to the North.

The biggest wholesale market is Pyongsong Market in South Pyongan Province, which has 5,000 retail booths. The daily floating population at the market is estimated at 100,000. Due to its proximity to Pyongyang, people from the capital area purchase their goods here, and thus the market is a major factor in determining prices in the capital city.

The wholesale markets are generally dominated by Chinese products.

It’s illegal to sell products from South Korea or Japan, but the demand for them is so great that they continue to be sold.

According to North Korean defectors and experts, the retail markets usually specialize in specific goods. Pohang Market in Chongjin, North Hamgyong Province, is known as a place for products considered to be luxury items in the North.

North Korean defector Kim Hyo-su, who once did business at the market, said that the medium-sized market had about 1,500 sales booths where secondhand products from Japan could be obtained.

“Party officials and people from the security organs would stop by to buy presents before heading to Pyongyang,” said Kim.

Unlike the pampered ruling class of the North, the majority of North Koreans use the markets to purchase anything from food to everyday items and other goods that the ailing North Korean economy cannot produce.

Observers say that North Korean officials acknowledge the need for the markets, but are keeping a keen eye on a venue they believe could become the catalyst for shaking the roots of the North Korean system.

Inside the North’s political classification system, which divides North Korean citizens based on their level of loyalty to Kim Jong-il and the regime, the business class is marked as a suspect “wavering class” and is watched very closely.

The businessmen have to pay for taxes and permits and must refrain from trading in a list of forbidden goods. Prices are controlled by the state and officials monitor the markets constantly. The markets are under the tight control of management offices installed by the state that are in charge of collecting taxes and enforcing the law.

In January, the North attempted to close the big markets down and divide them into smaller units, but had to postpone the plan due to resistance from its citizens, according to several sources familiar with the incident. In April, the state tried to close Pyongsong Market, but failed again.

Attempts to stop the sale of South Korean or American products have also been unsuccessful.

“In the North, South Korean and American products are very popular,” said Han Su-san, a North Korean defector and former senior government official in the North. “People have to see the brand markings with their own eyes, so the merchants show their customers glimpses of the products when asked.”

North Korean defectors say the markets have become a necessary part of the North Korean system.

“Without food distribution, everybody is going to starve. If you stop the markets, it’s like a death sentence,” explained Kim Han-ho, who once did business in Onsung, North Hamgyong Province, and escaped from the North in 2006.

The markets have expanded rapidly since Pyongyang introduced economic reforms in 2002, but people like Dr. Hong dismissed as premature the notion that these markets, which have grown in size and quality, could eventually morph into entities that could lay the groundwork for fundamental changes in the North.

“The markets have grown, but they are not challenging the system itself. The two simply coexist. Nobody wants a change in the system.”

Park Sun-seong, a professor specializing in North Korean affairs at Dongguk University, also pointed out that North Korean businessmen are not the ones escaping from the North.

“They are elements that could pose a threat to the system, but they have accepted the system and built up their wealth,” the professor said.

In a situation where party officials and security organs are constantly trying to put a lid on the markets, bribes are the order of the day. Security checkpoints and railroad stations situated at key junctions leading to the markets can only be passed by giving bribes to officials, according to statements given by several North Korean defectors interviewed for this article.

Hong Young-hui, a North Korean defector who sold goods at Pohang Market in Chongjin, recalls that when the daughter of the district party secretary went to Pyongyang for a two-week trip, businessmen in the market prepared food, clothing and Japanese products that she could give as presents.

Apart from such occasions, bribes and presents on official holidays are a must, making the party secretary of the area a “king,” in his own right, Hong said. He and other defectors said that people had to pay a premium in order to obtain booths in prime spots of the market.

The exact scope of the population directly or indirectly involved in market activities is unknown but some experts believe that the numbers are quite large.

Professor Park Young-ja of Sungkyunkwan University argued in a recent research study that up to 90 percent of the North’s population was in some way connected to activities linked to these markets because the country has virtually no industrial base or industries in which ordinary citizens can participate. Those sectors are the exclusive domain of the military, which operates on a separate economy.

Capitalizing on the markets, some businessmen have accumulated so much wealth that the bribes are relatively inconsequential.

Lim Han-o, who left the North in 2006 and lived in Onsung, remembered one visit to the apartment of a local businessman who was one of the wealthiest men in the area.

“He had his own phone, which is something that others can only dream of. His apartment was decorated with a South Korean TV, a sofa and a Japanese clothing cabinet,” Lim said. “Electricity is usually scarce but there was an air conditioner running, and it seemed that he was getting electricity from a separate source.”

Those who have no means of paying the official fees and bribes operate on the outskirts of the markets. Often dubbed “grasshoppers” in the North, they operate at the markets illegally without permits, but their numbers are so large that it is impossible to crack down on them.

The existence of the markets may also be one reason the food situation in the North is better than most would suspect. The widely held belief is that the supply of food in the North is at dangerous levels - a widespread famine in the mid 1990s was said to have killed tens of thousands of people - and that conditions have continued to deteriorate. But some experts who have dealt with the North personally have painted a somewhat less desperate picture.

“We have contacted various organizations, including the National Intelligence Service and the Unification Ministry here, and asked them for their assessments of the food situation in the North. We got completely different results and nobody really seems to know,” one U.S. official said, speaking on condition of anonymity.

The official, who is also familiar with the ongoing nuclear negotiations and has been to the North, cited one visit in which he asked the North Korean authorities to take him to a village that he had chosen at random in order to gauge the food situation.

“I don’t think there was enough time to prepare for our visit and put a show on. What we saw was a normal place with people that looked healthy. Certainly nothing like what you see in some countries in Africa.”

While in capitalist countries money is a sure way to power, in North Korea the wealthy businessmen are at the mercy of the state. Knowing that attracting too much attention can earn them the unwanted scrutiny of the state and bring their lives of comfort to an abrupt end, these businessmen try to hide their wealth as much as possible.

Analysts and North Korean defectors familiar with the circumstances think that the wealth of this particular group was already in the tens of thousands of dollars in the 1990s and has most likely increased.

Recent figures indicate that in the North’s black markets, 30 million North Korean won is equivalent to $10,000. The average monthly income of a North Korean worker is roughly 2,500 won. In a country where electricity, education and medical costs are supposedly covered by the state, the wealth of North Korean businessmen has reached astronomical heights by North Korean standards. The fact that this group has flourished within a system that is notorious for holding political prisoners may be a telling sign of how deeply embedded they have become.