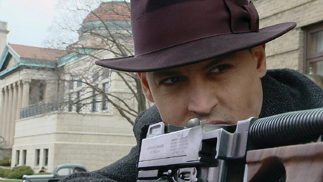 If you see “Public Enemies,” you might leave wondering what you just saw, and whether you liked it. Is it a historical drama? A gritty action film? A character study? A moral and political parable? It tries to be all of those things, and in attempting that much, doesn’t particularly succeed on any of those levels.

But while the film fails to live up to its promise, there are more than a few redeeming and downright fascinating aspects that make it worth seeing, especially for fans of period films.

Public Enemies is about the fall of Dillinger (Johnny Depp). His rise is a given: At the start of the film, he’s already been proclaimed “Public Enemy No. 1,” by J. Edgar Hoover (Billy Crudup), director of a Federal Bureau of Investigation still in its infancy. Hoover has assigned rising bureau star Melvin Purvis (Christian Bale) to Chicago to head up the hunt for Dillinger, who has been orchestrating bank holdups with gusto and media savvy, crafting something of a heroic public image by stealing “the bank’s money,” not the people’s. Even with the cops on his tail, he and his colleagues live it up at Chicago nightclubs, where he meets Billie Frechette (Marion Cotillard), with whom he is quite smitten - he steals her heart, of course.

Dillinger dashes around the Depression-era Midwestern United States, at times teaming up with other notorious criminals like Baby Face Nelson, with the authorities always one step behind him (although just how they would get to him is often skipped over). There’s no shortage of shoot-outs and cunning escapes, and Depp is clearly having some fun acting-out Dillinger’s deeds of derring-do.

But the action can be frantic and frustrating to follow. Dillinger and Purvis have so many anonymous flunkies it’s hard to care about, or keep track of, who is getting shot and killed. While the filmmakers probably wanted to insert as many historical figures as possible, they fail to give anybody but the leads any depth.

Which is not saying much. A single line of dialogue between Depp and Cotillard is given the weight of telling Dillinger’s entire back story, and the chemistry between these two as romantic leads is tepid at best. Depp has his moments, but is capable of much more. And Bale’s unmemorable performance only ever switches between brutish and brooding.

I also thought I picked up some commentary about the “War on Terror” and the Bush administration’s use of harsh interrogation techniques, which I found unsubtle and misplaced, considering the strength of this film is as a period piece, with costumes, set, music and atmosphere all with the soul of 1930s Chicago.

Crudup’s performance as a young, ambitious J. Edgar Hoover stands out, but interesting aspects about his attempts to expand the FBI during his “War on Crime” against Dillinger and his ilk are merely touched upon. Also given mere surface treatment is the complicated relationship between Chicago’s organized crime world and bank robbers like Dillinger, whose increasingly high-profile escapades begin to make the mob uncomfortable.

So in the end, the rich atmosphere and these historical footnotes made my mixed feelings mostly positive.