Music and movies under the moonlight

Music and movies under the moonlight 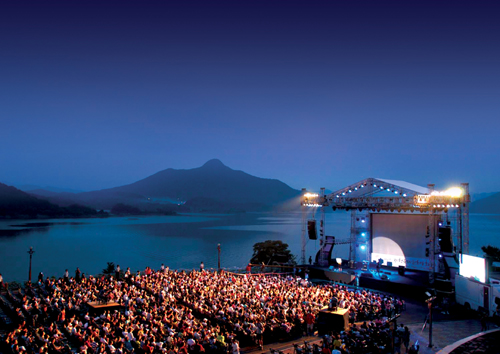 Festivalgoers watch a film screening beside the shores of Cheongpung Lake on a summer night during last year’s Jecheon International Music and Film Festival. Provided by the organizer

Just imagine watching movies and listening to music in the open air, say, along the shores of a lake or under a starry night sky. Sounds pretty good, doesn’t it?

Well, if you’re a movie buff and music lover, you won’t want to miss out on the local music-themed film festival that opened yesterday and will run through next Tuesday in Jecheon, North Chungcheong.

The Jecheon International Music and Film Festival, which came into being in 2005 and celebrates its fifth anniversary this year, kicked off its six-day schedule yesterday in the lakeside city. Jecheon is famous for Cheongpung Lake and other natural attractions such as Mount Worak National Park.

This year’s JIMFF, which will feature about 90 films from 35 countries, opened with Golden Globe-nominated director Joe Wright’s film “The Soloist” starring actor-cum-musician Jamie Foxx and Robert Downey Jr. in a real-life story of an unlikely and yet special friendship between a seasoned journalist and a homeless, Juilliard-trained musician.

The festival’s sole competition section, “World Music Film Today,” which was inaugurated last year, presents 10 music-related films from around the world this year. Two jury-selected films will be given the Grand Prize and Special Jury Prize, respectively. The Grand Prize-winning film is expected to close the festival on its final day. This section will serve as a good opportunity for audiences to observe the latest trends in world music films, event organizers said.

There are other sections where moviegoers can relish various aspects of “music cinema.” The “Music Shorts on Track” section boasts a lineup of 28 music-related short films, including those already recognized at international movie fests. The “Music In Sight” section will screen 14 music documentaries introducing musicians through an account of their music and life. For instance, the film “Celia: The Queen” features the life story of Celia Cruz, the so-called “Queen of Salsa,” a girl from Havana, Cuba who grew into an international diva. “El Ultimo Aplauso” tells the story of a group of veteran tango musicians in Buenos Aires who performed together for years in El Chino, a famous tango bar.

The “Cinema Concert” section, in particular, will provide audiences with a special experience of watching a film with live music played alongside. Two programs are in the lineup this year: the 1920 German silent film “The Golem: How He Came Into the World” with a live performance by guitarist Gary Lucas; and the Austrian movie “Universalove” with a performance by Austrian indie band Naked Lunch.

There are a lot more outdoor movie screenings followed by live concerts during the nights of the festival, which festivalgoers will be able to enjoy through the “One Summer Night” program. Popular Korean and foreign musicians, including singer Kim Jang-hoon, the Kim Chang Wan Band and the Benny Golson Quartet, are expected to heat up summer nights in the scenic lakeside city. For more information, visit www.jimff.org.