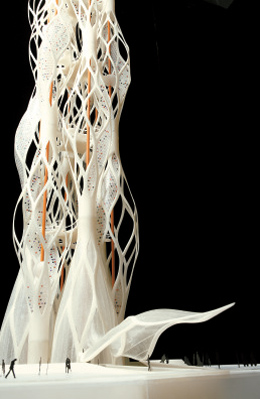 A computer rendering of Last House, a mausoleum proposed for construction in the heart of Seoul. Provided by System Lab

When a huge building resembling a refrigerator was unveiled in Yeonhui-dong, central Seoul, last March, people were at a loss to describe it. Where was the entrance? What was that plastic triangle at the corner of the building?

The building houses the YHD Art and Management Projects gallery, designed by Hong Taek, 42, and Kim Chan-joong, 40, of the architectural firm System Lab.

From the looks of the gallery, it may seem as though these two men are all about aesthetics. But Hong and Kim incorporate elements of philosophy into their designs and each of their creations is meant to tell a story of its own. 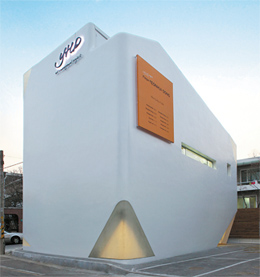 YHD Art and Management Projects gallery. To create additional exhibition space inside, the entrance was placed at the rear corner of the building. Provided by architecture photographer Kim Jae-gyeong

So how did the refrigerator-like design come about?

“We wanted to construct a building that looked like a commercial product,” Kim said.

He went on to explain that they had set out to design a space that would emphasize the concept of artworks as commodities. To do this, they used glossy industrial paint and softened the angles of the exterior. Their other goal was to increase the amount of interior wall space.

For ventilation and lighting, they cut off a corner of the building and covered it with transparent plastic.

“We had intended for the gallery to look like a cell phone, but when people said it looked like a refrigerator, we thought that was O.K., too. It’s no fun if there’s an answer to everything,” Kim said. “I want to show that buildings can interact with people like organisms.”

The building they designed for company retreats on Geoje Island in 2007 is a successful combination of form and function. Because the building sits atop a steep slope, a retaining wall was needed. Kim and Hong went beyond designing a wall and created a multipurpose structure consisting of a staircase, a bathroom, a storage room and a fence.

System Lab’s founders are both alumnae of Korea University’s architecture department. Hong studied in Japan and Kim graduated from Harvard University Graduate School of Architecture and the Swiss Federal Institute of Technology Zurich.

One of their most ambitious projects is a proposal for a mausoleum in the heart of Seoul. The structure, Last House, was exhibited at the Korea Pavilion at the 10th Venice Biennale in 2006.

“New architectural designs should be experimental and innovative, ultimately changing the way people live,” Kim said. “Although people try to avoid mausoleums, we wanted to show that by creating a ‘tower of healing,’ an abhorrent facility could be transformed into an attractive national landmark, thereby changing people’s perceptions of what mausoleums are.”

For more information about the exhibitions at YHD Art & Management Projects, call (02) 324-1286 or visit www.yhdprojects.com.