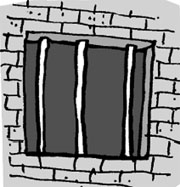 The Lee Myung-bak administration announced earlier this week that the president will pardon over 1 million citizens convicted of petty crimes on Liberation Day. Such widespread pardons have a long history on the Korean Peninsula.

Kings frequently signed amnesty decrees in the old days when natural disasters happened or a member of the royal family became ill. They believed that such troubles came to them when the grievances of people unjustly held in jail reached heaven.

But when King Seongjong of the Goryeo Dynasty fell into critical condition in 997, he chose not to give a mass pardon to prisoners. He explained, “Life or death depends upon heaven. Why should I unjustly extend my life by releasing guilty people?”

King Seongjong, however, realized the power amnesty holds in ruling a kingdom. He feared that if he handed down a decree granting amnesty, he would be denying the new king a means of gaining the public’s trust. Two months after his death, his successor Mokjong could usefully issue his own decree to win the hearts of the people.

In sharp contrast, King Jungjong of the Joseon Dynasty preferred the power of dialogue over the power of pardons. He said, “If we make no mistakes in running the state administration by using prudence in speech and action, opening the offices to gentle people and accepting good advice, natural disasters will naturally disappear. Amnesty is not a basic solution to prevent natural disasters from occurring.”

Last year, President Lee Myung-bak sounded not that different from King Jungjong with his choice of “Shi hwa yeon pung” as his new year’s catchphrase. The phrase means that a nation continues to live in peace with good harvests every year, and the choice reflects his public commitment to promoting economic growth and national unity.

In the end, however, Lee discovered amnesty is a much easier policy to implement than Shi hwa yeon pung. Lee’s approval ratings have already slightly risen on the announcement of the Liberation Day amnesty, which aims to “protect common people’s livelihoods.” His previous mass pardon allowed him to make a comeback as a politician.

With this amnesty, we hope that Lee will remind North Korea of the power of pardons. Lee should encourage Kim Jong-il to grant a special amnesty to those South Koreans detained in the North.