Take a soul-soothing trip under the water

Take a soul-soothing trip under the water 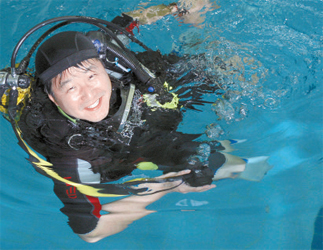 If there is anyone who really knows water, it is Jang Jeong-hun, 35. His love for exploring the world in and under the water can be measured by the number of times he’s been below the surface, and the current count is 1,000 since 1995. These days, he goes diving at least twice a week.

“I really enjoy scuba diving,” Jang said. “Whenever I get the opportunity, I grab my equipment and dive straight in. Some people around me think I’m crazy.”

When asked why he has such a great passion for scuba diving, he said, “It feels like I’m taking the first step into space. You just have to experience it for yourself in order to know what I’m talking about.”

Jang had his first experience with scuba diving while serving in the military as a member of the Korean Marine Corps, where he had to dive as part of his training. He fell in love. The feel of the water wrapping around him wiped his stress away and gave him an immense sense of satisfaction. 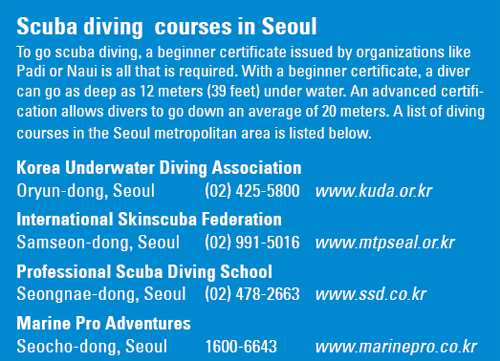 After completing his military service, he pursued his love of diving by enrolling in scuba certification courses at the Korea Underwater Diving Association. He eventually became certified as an instructor and he now teaches classes there when he has time off from his job at the Seoul Metropolitan Government’s Waterworks Office, located north of the Han River.

Jang’s passion for scuba diving led him to start a diving club in 2008. That year, he and some colleagues started clearing debris from local waters every now and then. What started off as a small group has now blossomed into an association with 70 members. Once a month, they dive into the reservoir of the Paldang Dam, which provides water to the Seoul metropolitan area, and to clear away debris. They also help the Waterworks Office by cleaning other polluted areas.

But it’s not all fun, and Jang has had some close calls. Once when he was still a beginner, he became so mesmerized by the coral reefs that he lost track of his partner. He was 20 meters deep. His body became stiff with fear and he began to struggle, but the water pressure prevented him from going anywhere. In his state of panic, he took off the weight belt strapped around his waist and he started to float toward the surface. At one point, his oxygen tank became entangled in a fishing net and he had to free himself.

Fortunately, Jang escaped without injury. He says that despite his experience, scuba diving is safe with the proper precautions.

“As long as you follow the rules, the probability of having an accident while scuba diving is much lower than the chance of getting involved in a car accident,” Jang said. The scuba enthusiast has traveled to many places and dived in different bodies of water, but says he now enjoys diving closer to home.

When he retires, he says he wants to establish a scuba diving resort and teach others about diving. “I hope that I can enlighten all those who have never gone scuba diving and lead them into the magnificent world of the ocean so that they can feel what I do when I go diving,” he said.