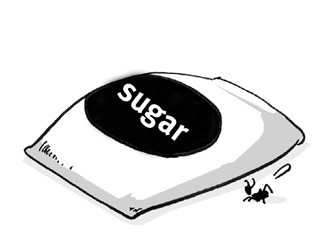 Sugar has a long history in the world’s markets. Historically it was called “the sweet essence,” extracted from the bitter toil of African slaves and Asian immigrants. Along with white rice, flour, salt and synthetic seasonings, sugar is now seen as one of the five ingredients that is harmful to one’s health.

In Korean, sugar is called seoltang, which can be translated to “snow sweet.” The name comes from sugar’s white color. In English, the word sugar originates from the Sanskrit word sarkara. Since sugar does not easily decay, people from China and Europe imported their sugar from India in ancient times. Still, ordinary people could not dare to dream of tasting sugar in those early days of the sugar trade.

Sugar and tea were treated as precious medicines that were sold at pharmacies until the early 17th century. Due to the price of sugar, drinking tea with sugar was like drinking an alcoholic drink sprinkled with gold dust in those days. Sugar was a symbol of wealth, and relegated to those with money and those who pretended to have money.

In the middle of the 17th century, the price of sugar started to plummet as Europeans planted sugar cane in large-scale plantations in Brazil and the Caribbean islands using slave labor.

On the back of such labor, sugar became affordable and so popular in the 18th century that even Europe’s lower class could afford to drink tea with sugar.

Germany, which had no overseas colonies, experimented with extracting sugar from beets to feed the growing demand for sugar in the country. Bonaparte Napoleon also encouraged farmers to plant sugar beet in order to free France from the British monopoly on sugar trade.

Sugar is a political product. The history of sugar trade is tainted with protective measures such as government subsidies, duty barriers, minimum price systems and import permit systems that were enacted according to the needs of a country.

Sometimes these protective systems benefitted Korea, such as when Europe suffered from excess sugar beet harvests because of their subsidies to farmers. These farmers sold their surplus raw sugar to Korea at extremely low prices just to get rid of the sugar.

But the days of cheap sugar have ended. The price of sugar in Korea will rise from now on as international sugar prices skyrocket. World sugar prices recently reached a 28-year high.

This record price comes as analysts suggest that India will have poor sugar cane yields this year due to a weak monsoon season. Some have suggested that the price will continue to rise as sugar consumption in China increases sharply, while production in Brazil and other sugar producing countries does not go up.

According to the International Sugar Organization, Koreans consumed 26 kilograms (57 lbs) of sugar per person in 2005. Compared to the average amount of rice Koreans consumed last year, which was 75.8 kilograms, this is not a trivial amount.

Perhaps it’s time we rethink the amount of the sweet essence that we consume every day.