Fireworks on, off stage at ETPFest

Fireworks on, off stage at ETPFest

It ended with fireworks exploding one after another, lighting up the humid summer night sky with a brilliant array of colors.

It was a fitting close to one of the most celebrated rock festivals in Korea, the 10-hour, high-energy event that was ETPFest 2009, held at Jamsil Olympic Stadium on Saturday.

This year’s lineup was as good as last year’s, with major bands including Keane, Limp Bizkit and Nine Inch Nails (NIN) rocking the house. Korean bands like Fade, Gumx, Pia and Boom Boom Satellites kicked it all off, while headliner Seo Taiji closed out the extravaganza at night.

The summer heat was suffocating throughout the day. Exhausted and sweaty, many rock fans sat in the shade or cooled off under mists of water sprayed in designated areas around the stadium. 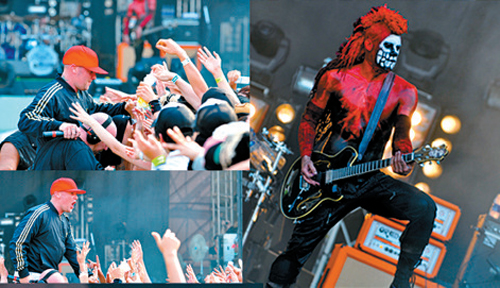 But when the bands walked out, the heat became secondary to the hordes of fans that rushed forward and started jumping around wildly. Immersed in this frenzied crowd, one could the smell the strong scent of salty sweat permeating the air.

The British band Keane enchanted the crowd - especially the females, whose eyes were fixed on the rockers - with its soft scores.

Music fans went nuts when Limp Bizkit took the stage with all of its original members, including guitarist Wes Borland, who left the band in 2001. Frontman Fred Durst not only came down into the audience, he also brought a few fans up on stage.

Nine Inch Nails followed with its dark and mysterious songs, highlighted by frontman Trent Reznor, who was deeply entranced in his music. Adding to the scene, fans lit up the sky with their mobile phones when night fell.

Seo Taiji appeared on stage in a spacecraft that slowly descended from above, whipping the crowd up into a frenzy. Most of Seo’s fans are now verging on middle age. But they danced and sang along just as they always have since 1993, when he first started to draw legions of followers.

It was a particularly meaningful concert for the more than 20,000 Seo Taiji worshipers crowding the festival grounds. The Korean singer has said he will not hold any more shows for the time being, as he is going to work on his ninth album.

He ended the night with one of his favorite songs, “Live Wire.” Mirroring the lyrics, 20,000 or so rock lovers crossed the border of insanity to unleash the energy of youth.