Spend some green time along new line No. 9

Spend some green time along new line No. 9 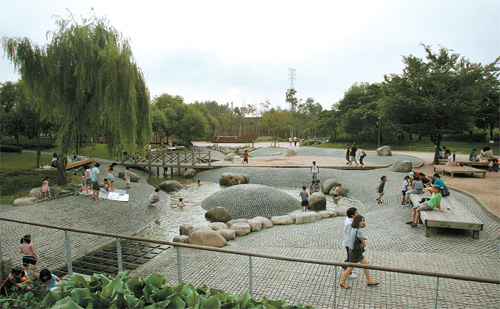 Children splash in the water at an aquatic playground in Seonyudo Park. By Jeon Min-kyu

Last month’s opening of Metro 9, the new subway line that links southern Seoul and Gimpo International Airport in southwestern Seoul, has set a new standard for subway station design in Korea. It is the first with indoor gardens and natural lighting. At Heukseok Station, there is a canopy over the station entrance that opens on sunny days and closes in the rain.

One thing that makes Metro 9 so appealing is its proximity to the natural ecology along the Han River.

A number of parks are easily accessible from the subway stations - including Seonyudo Park, Guam Park and Yeouido Ecology Park - in addition to attractions like the Heojun Museum.


Seonyudo Park is full of mystery, and seems to defy time and space. Once a water purification facility, the park was transformed into an ecological aquatic garden in April 2002. 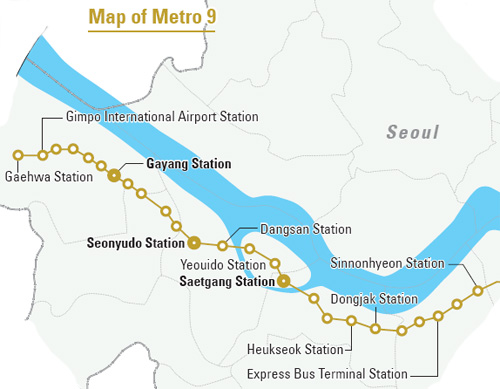 The park is located on Seonyu Island, where, it’s said, the gods play. It occupies 110,407 square meters (27 acres) of land near the midpoint of the Yanghwa Bridge on the Han River. Visitors can explore the park’s many gardens, a greenhouse and a water playground or take in cultural events at the amphitheater and gallery.

The Garden of Transition resembles an ancient sunken garden. It is a wonderful example of how industrial wreckage can be turned into an avant-garde version of the Garden of Eden. Once a settling basin for chemicals, it is now divided into eight smaller gardens featuring different plants such as vines, moss and ferns. Water flows into the sunken part of the garden, over bridges and along a high path around the garden. There is also a waterfall, from which water runs against a backdrop of rusting steel. The waterfall is a popular photo spot.

Equally beautiful are the Aquatic Botanical Garden and the Garden of Green Columns. The latter was formed after the top concrete slab of the reservoir was removed, exposing the columns to the light. The columns, now fully covered with vines, create a poetic atmosphere. The botanical garden holds water plants in its shallow basin, allowing visitors to observe them up close. With the plants of summer in full bloom, colorful lotus flowers and other plants add to the lushness of the setting.

If the gardens are for adults, the water playground near the water purification basin is definitely an attraction for children. It has small hills that look like sand dunes and are covered with stone tiles. Shallow water perfect for wading loops in and around the area.

The Hangang Gallery sits atop the place where the water conveyance pump used to be. It offers an exhibition on the history of the Han River and the efforts to revitalize it through the ongoing Han River Renaissance Project.

The Footbridge of Peace, an arched bridge connecting the island and the southern bank of the Han River and Seonyudo Station on subway line No. 9, is just as spectacular, especially at night when the lights come on, illuminating the entire area. The bridge was created by French designer Rudy Ricciotti in 2000.