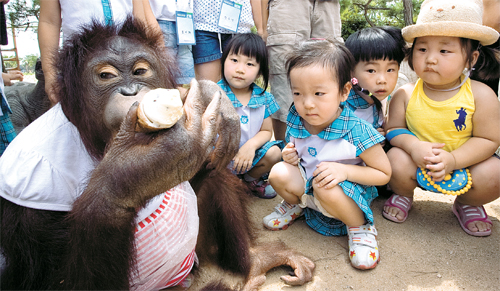 
A7-year-old child has a yellow Indian python coiled around his neck, but he doesn’t seem scared.

“I was afraid in the beginning but this is really fun,” said Mun Ga-yeon, a resident of Gimpo, Gyeonggi, laughing despite the presence of the snake. Other children excitedly wait their turn to have the snake draped around their shoulders. Nearby, another child is looking more melancholy than the others: An orangutan has snatched away his ice cream.

In the Theme Park ZooZoo in Goyang, Gyeonggi, visitors and animals interact with each other with ease. In most zoos, people expect to see animals through the bars of cages or from a distance. However, the number of zoos where people and animals can play with each other is on the rise. Most of them are small zoos hidden in the suburbs. Nevertheless, many people go there with their children despite the inconvenience of driving off the beaten track.

So what’s the attraction? Shin Tae-chul, a 37-year-old banker, said he was happy to see his 7-year-old daughter having fun riding an ostrich. Shin had come all the way from Gimcheon, North Gyeongsang, to Ostrich Safari in Hwaseong, Gyeonggi. “Watching my daughter having a good time riding the ostrich helps me overcome the fatigue from driving such a long distance,” Shin said.

Asked why he came such a long way, he responded, “I wanted to show my daughter what an ostrich is.”

Jo Su-mi, a 39-year-old mother, brought her two daughters to Seoul Forest in Ttukseom near the Han River to participate in a program to feed young fawn.

“I wanted to let my children play with animals in a natural environment while they are young,” Jo said. “By actually touching animals rather than looking at them in a book, they will be able to learn how to love and respect animals.”

Won Hyo-suk, 57, living in Mokdong, southwestern Seoul, said animals, unlike people, are simple and being with them makes her feel like a kid all over again.

“Closely interacting with animals is one way to stay happy and preserve your innocence,” he said.

Ostriches cannot fly. They just run. And Ostrich Safari is a place where visitors can ride this flightless bird. There is no saddle or grip, but a zoo keeper will help you mount. You just have to hold the feathers tight. Another keeper will guide the bird in the right direction. People weighing over 70 kilograms (154 pounds) are too heavy and can only watch.

An adult ostrich is around two meters (6.6 feet) tall and weighs around 150 kilograms. It can run as fast as 90 kilometers (56 miles) per hour, for about an hour straight. But don’t expect to accelerate to those speeds here. The best you can do is ride the bird on a short, 60-meter track. 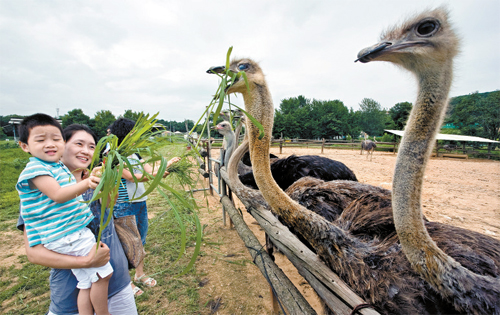 “It was thrilling to ride on the high back of an ostrich and swing back and forth,” said Park Hee-jin, a fourth grader from Gyeongsan, North Gyeongsang.

Feeding the bird is also an extraordinary experience. If you put the food on your palm, the bird will grasp the food with its stumpy beak. Visitors can also bowl with an ostrich egg, which weighs about 1.5 kilogram.

This is the place for anyone wishing to wind a yellow Indian python around their neck or hug an orangutan. There are over 2,000 animals of 240 species, including tigers, lions and monkeys, in the privately owned Theme Park ZooZoo in Goyang, Gyeonggi.

You’ll also find parrots, squirrels monkeys and donkeys. Here, people are allowed to interact with animals, though not with the more aggressive ones like wild cats.

At 1:30 p.m. every day, zookeepers and some of the zoo’s animals parade around the grounds, allowing kids to get a close-up view of animals they might have only seen in pictures before.

Other activities that get the crowd going include sessions with an orangutan named Orangi. If you approach the ape, it will put its arm around you for a picture and even give you a kiss.

The albino Burmese python is also popular. Like its name, the snake is very long, 1.5 meters. The snake is gentle and its skin is soft. Children like to stroke these majestic animals and have them draped around their shoulders.

Another highlight involves the lion and tiger cubs whose playful tricks are cute to watch. Admission to the zoo costs 9,000 won. Call (031) 962-4500 or visit www.themezoozoo.or.kr for more details.

In Beartree Park in Yeongi County, South Chungcheong, there are 150 half-moon bears and 200 deer. Unfortunately, it is impossible to run with or around them. A grown-up half-moon bear is dangerous and deer tend to avoid people. Like other zoos, you can only watch them running around in their caged compounds or feed them from a distance.

Every Saturday and Sunday, however, children can feed the animals. This program runs from 10 a.m. to 3 p.m. Visitors can walk with deer in the park, attach name tags and give them some milk. They can also watch trainers walk with half-moon bears and they can feed the parrots. Children must be at least 5 years old but younger than 13. Admission costs 20,000 won. 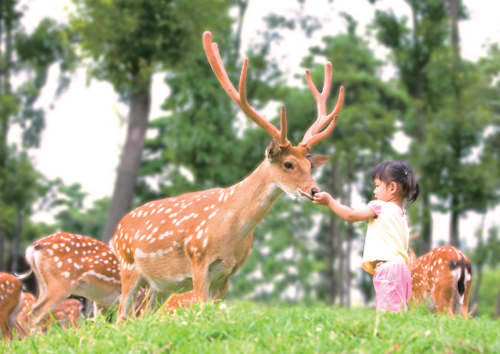 A deer in Beartree Park in South Jeolla. By Cho Yong-chul

Jangsang Harbor in Ulsan was at the forefront of the Korean whaling industry 20 years ago. Now hunting whales is prohibited, and the place has turned into a base for whale “research.” A sea tour that started up last month takes visitors out to watch the whales.

The boat used to ferry tourists out to sea was donated by the National Fisheries Research and Development Institute earlier this year. The boat departs at 10 a.m. on Wednesdays, Saturdays and Sundays from a harbor near the Jangsaengpo Whale Museum in Nam District. It heads to Ulsan lighthouse, Daewang Rock and Ganjeol Cape, which are well-known areas for whale spotting.

However, whales are not seen every day. “There is only a 20 to 30 percent probability of spotting a whale,” said Mun Jong-hyeon, an employee at Ulsan’s Nam District Office.

Weather also plays an important role. The boat departs only half the time scheduled because of bad weather. But if you are really lucky, you can see whales racing the boat.

Ani Kingdom, an animal entertainment company, is holding a special exhibition of rare animals and animal shows in Songdo Resort in Incheon until Oct. 31.

There are 1,000 animals and 300 species, including king cobras that eat other poisonous snakes, tortoises that can bite a crocodile, tarantulas and piranhas.

Seoul Zoo in Gwacheon, Gyeonggi, is offering a night program from 7 to 10 p.m.

Without artificial lights, visitors will be guided to see the cages of fierce animals including tigers, wolves, lions and bears.