Patching up with former enemies

Patching up with former enemies 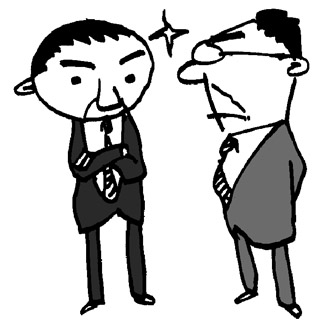 In the 1st century B.C., Gnaeus Pompeius Magnus was the strongest rival of Gaius Julius Caesar, both of whom fought to become key political figures in Rome. The two were heads of the First Triumvirate, alongside Marcus Licinius Crassus, and ultimately fought each other in a civil war.

Caesar followed Pompeius when he fled to Egypt, and when he found out that Pompeius had been murdered, he punished all those involved. It was a last act of courtesy for his rival.

Great rivals in history sometimes momentarily show a connection as if they have been friends for life, when the threat of the other disappears.

The throne of Queen Elizabeth I of England was threatened in the early years of her reign by her cousin Mary, Queen of Scots. When Elizabeth executed Mary, Philip II of Spain attacked England with the Invincible Armada.

Nevertheless, Elizabeth I made James, son of Mary, later known as James I, her successor. There is speculation that the decision was in part related to the death of Mary.

Of course, not all rival relationships end so well. Pang Juan cut off the legs of Sun Bin to become the highest strategist during the Warring States Period of China.

And when Pang Juan later lost to Sun Bin, his last words as he died were apparently, “So this is how a young man will make his name.”

There was no last reconciliation for Benjamin Disraeli of the Conservative Party and William Gladstone of the Liberal Party who led the British Empire in the 19th century, either. Gladstone did not visit Disraeli once when he was on the brink of death in April 1881.

Even when Queen Victoria suggested he go, Gladstone said, “I would have nothing to say if I went.”

When Disraeli declined a state funeral and chose a personal funeral instead, Gladstone remarked, “He is putting on a show to appear humble.”

The day after Disraeli died, Gladstone had to read a eulogy at Parliament. People say that Gladstone unwillingly read the short eulogy and later complained, “I have never done anything so difficult in my life.”

Compared to this, the last reconciliation between former presidents Kim Young-sam and Kim Dae-jung, who have competed all their life for a leading position in the Republic of Korea, was much warmer.

Needless to say, the history of Korea would have changed if genuine cooperation between the two had started at least about 20 or 30 years ago.

But too much time has passed to even talk about such possibilities. In any case, this appears to be how the age of the most seasoned politicians will come to an end.


The writer is the contents director