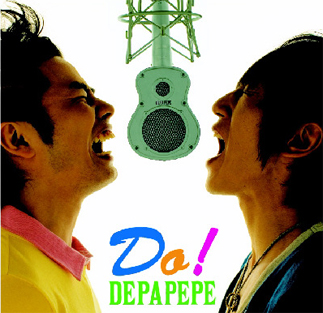 Tokuoka Yoshinari and Takuya Miura comprise Depapepe , a two-man Japanese acoustic guitar duo formed in 2002. They made three indie records before releasing “Let’s Go!!!” in 2005, which ranked in the top 10 on Oricon’s Instrumental Artist Debut Chart.

Since their debut, the group has enjoyed a great deal of exposure through TV, radio and live events, all of which have enhanced their talent.

Their new album, “Do!” was released for their fifth anniversary and includes 16 contemporary instrumental songs.

The duo started off by performing on the streets of their hometown of Kobe. From there, they toured in Osaka, Kyoto and other areas of Japan. Their earnest, heartfelt sound began to attract a circle of fans.

Listening to their album put me into a relaxed mood. Along with their smooth melodies, the duo imbues their music with emotion, sensitivity and a certain boldness.

Depapepe have been incredibly popular since 2002 - and they could be the biggest up-and-comers of the year.