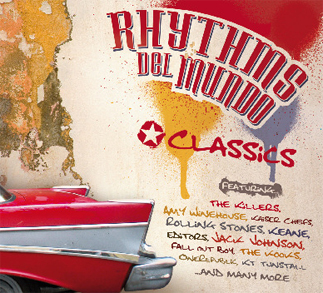 While The Rolling Stones and KT Tunstall are hardly names that spring to mind when one thinks of Latin music, they somehow work when paired with the salsa beats of Rhythms del Mundo. The Cuban group has paired up with these mainstream names, and many others, for their latest collaborative effort. “Classics,” a disc of Latin-infused renditions of rock and pop mainstays, is the latest product of Artists Project Earth, a group that seeks to raise funds to fight climate change.

There’s a ton of hip in this do-good effort, with indie darlings like Editors and the Kaiser Chiefs, but some matches are better than others. Michael Jackson’s “Beat It” was weird enough coming from Fall Out and John Mayer, but add in some timbales and you’ve got one strange mishmash of musical genres.

Then again, one listen of Tunstall’s “Because the Night” and the up-tempo cover of “Big Yellow Taxi” by Aquila Rose and Dana Valdez is enough to make you want to bust out a flowing skirt for some sassy salsa dancing of your own.