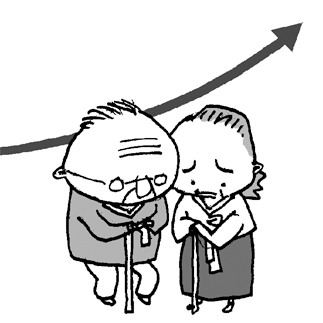 In the old days, there was no “country for the aged” on earth. The Caspians who dwelled at the coast of the Caspian Sea are thought to have starved to death anyone over 70 and later predict their fortunes by watching what kind of animal fed on the corpse.

It was considered a good omen if a body was consumed by an eagle or a wild animal but bad luck if no animal approached.

In the case of Native Americans, there were tribes that drove the aged to death by forcing them to work until they collapsed from exhaustion. Some Eskimos in the Arctic Ocean strangled to death senior citizens who could no longer get food for themselves. They would abandon the helpless whenever they moved to another place.

Asians have also been tough on the old. The Jurchens of Manchuria shot arrows at their elderly, whom they suspended in sacks from trees. If a son killed his father with a single shot, he was praised as a filial son.

In ancient societies where food and fuel were scarce, supporting the lives of the aged was a luxury that was often too high a price to pay. They thought it better to use limited resources on the younger, more productive generation, which accounts for why elderly people were killed or abandoned.

These barbaric customs disappeared a long time ago, but it seems that how to treat older people is becoming an issue in the United States after the Obama administration, which is currently trying to promote health care reform, said the government would make the public Medicare system for the aged, which is mired in financial difficulties, more effective.

The conservative opposition party immediately launched a fierce attack on the government claiming that the Obama administration is going to stop medical treatment for helpless old patients.

Infuriated senior citizens sided with the opposition while the other side claim it is unfair to provide free medical care to people over 65 when the health of nearly 9 million children is at risk because they have no health insurance.

Some even say the government should reduce the money spent on excessive life-extension so more money can be spent on vaccinations for young children.

Korea is fast becoming an aged society and is in no position to ignore the problem. By 2050, the population over the age of 65 will increase to 38 percent.

By the time our society becomes such an aged one, I wonder whether anyone can say for sure that the ancient custom of killing or abandoning the aged will not re-emerge.