Greek locale can’t save this big fat waste of time

Greek locale can’t save this big fat waste of time 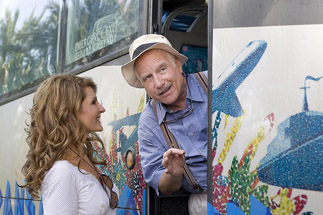 Irv (Richard Dreyfuss), right, dishes out some pearls of wisdom to tour guide Georgia (Nia Vardalos) in “My Life in Ruins.” [MovieWeb]

As the credits roll at the end of “My Life in Ruins,” they are accompanied by outtakes of the cast dancing, waving at the camera and having a good time. Of course they’re having a good time: They’re in Greece, and they’re making a movie. But the outtakes are a cruel reminder that while these actors got paid to tour Greece and recite clumsy sex jokes, you paid to watch them have a much more enjoyable time than you just did.

Nia Vardalos, whom you might remember as the writer and star of “My Big Fat Greek Wedding,” stars in this ruin of a picture, which in Korean is titled “My Romantic Guide,” a name that doesn’t lend itself quite as well to surly put-downs.

Vardalos plays Georgia, a single Greek-American who finds herself leading tours around her motherland after losing her job as a professor of Classical Greek studies. She complains about the hordes of boorish tourists she has to escort around, and indeed, they are irritating. There are the loudmouthed, ethnocentric Americans; the loudmouthed, drunken Australians; and the loudmouthed, stuck-up Brits. But one of the reasons they don’t shut up is because Georgia is a really lousy tour guide. The tourists don’t know how lucky they are, though - they aren’t watching the movie.

Georgia’s bus is driven by the hunky but woefully named Poupi Kakas (Alexis Georgoulis) - and yes, this is what passes for humor in this movie. Georgia initially finds him just like all other Greek men, questioning why he does not have a “life plan” and criticizing his laid-back, Greek approach to life as laziness.

So how on Earth will our deeply contrasting leads wind up with each other? Enter Richard Dreyfuss, who is really slumming it in this movie as Irv, an aging widower who’s constantly cracking jokes. His sole purpose in the film is to solve all of the other characters’ mundane problems. To help Georgia make her tour group start liking her more, all he has to do is tell her to loosen up and be nicer to them. And of course Georgia can’t figure out by herself that Poupi is interested in her; Irv and the others practically have to push her into his arms.

There’s a scene where some of the tourists are having trouble haggling for souvenirs. The shopkeeper tells them, “I could sell you some antiques that were handmade by my grandmother, but all you want are these lousy trinkets. This junk was made in Korea!” At least some of the “junk” made in Korea includes movies worth seeing.