Hong Kong cinema back in the spotlight

Hong Kong cinema back in the spotlight 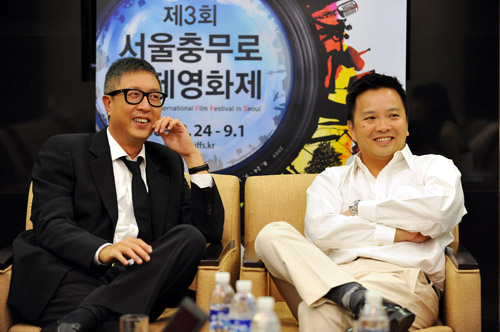 Most movie buffs probably have heard of “Infernal Affairs,” the hit Hong Kong crime-thriller released in 2002.

But casual moviegoers might recognize it as well, even if the title seems unfamiliar at first.

The Hollywood blockbuster “The Departed” - an Oscar-winning 2006 film directed by Martin Scorsese and starring Leonardo DiCaprio, Matt Damon and Jack Nicholson - was a remake of the Hong Kong hit.

Director Alan Mak and writer Felix Chong were in town this week to participate in the ongoing Chungmuro International Film Festival in Seoul. Their latest co-production, “Overheard,” was selected to compete in the Chungmuro Opus part of the festival.

The JoongAng Daily sat down Tuesday with the two to chat about Infernal Affairs, the film industry in Hong Kong and their latest movie.


Q. Infernal Affairs was received very well by both Korean and overseas audiences. Do you think it helped revive Hong Kong cinema?

Mak: First of all I’d like to thank Korean viewers for their positive response to the film. I would call it a “transition” rather than a “revival” in Hong Kong cinema that Infernal Affairs has brought about. While the Hong Kong action-crime movies of the past used hundreds of bullets in their scenes, Infernal Affairs adopted a gripping story instead. To put it simply, all those bullets reside in the story itself.


What is the most important part of film-making?

Mak: What I consider the most is the film’s storytelling style, no matter the genre. People in Hong Kong are very realistic and efficiency-driven and I think such characteristics are naturally reflected in my films.

Despite the fact that the Infernal Affairs series is a hit, Hong Kong cinema still hasn’t reached the full glory of its past.

Mak: We are now facing fierce competition in the movie industry. I think Hong Kong cinema needs to change to cater to a wider audience in the mainland and overseas.

Our 2008 work “Lady Cop & Papa Crook” was an outcome of an effort to adapt ourselves more to the Chinese movie market and win favor with the Chinese audience. However, we have returned to the Hong Kong-style in our latest film, Overheard, and I think it is the way for us to go - adapt ourselves to new markets while keeping our style.

Chong: In the globalization era, there is a wide choice of movies the audiences can relish, leading to a limited market share for each film and filmmaker. In these circumstances, I think it is important for a movie to deal with universal values in order to resonate everywhere.


What do you think of the Korean movie market?

Mak: It is amazing to hear that a single movie attracts millions of viewers in Korea while the average number of viewers for a Hong Kong movie is around 200,000. I think the Korean movie market has great potential and the audience’s role is critical for Korean cinema’s further growth.


Are there any Korean directors who catch your attention?

Both: We like Bong Joon-ho. He tells universal stories and his style is superb. He understands cinema very well.

Chong: The other notable director is Hur Jin-ho. His 2001 film “One Fine Spring Day” was such a beautiful movie that I saw it several times.


Tell us about your latest film, Overheard.

Chong: It is a story underlining the tendency that people in modern society have to unconsciously and habitually make mistakes in their daily lives.

Because Overheard is currently a box-office hit in Hong Kong, mainland China and Singapore, plans for a sequel to the film are now under discussion, the directors said. It has not yet been determined whether Overheard will be released in Korea, but it is a good possibility, they added.

Regardless, Korean audiences will have a chance to watch the movie on Sunday as part of the Chungmuro festival. The event, featuring 214 films from about 40 countries, runs through Tuesday. For more information, visit www.chiffs.kr.