[TALK OF THE TOWN] Rain forecast for this weekend

[TALK OF THE TOWN] Rain forecast for this weekend 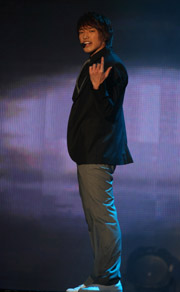 Korean pop star Rain will be kicking off his Asian tour this weekend in Japan.

The singer will perform both Saturday and Sunday at the Saitama Super Arena in Saitama City. Tickets for the concert, titled, “Legend of Rainism 2009: Rain Asia Tour in Japan,” are already all sold out according to J.Tune Entertainment, Rain’s management agency.

After his performances in Japan, the singer will stage concerts in Seoul and Hong Kong in October and December, respectively.

“Because he’ll be promoting his Hollywood movie ‘Ninja Assassin’ in November, he only has a few dates on his tour schedule,” said an official at J.Tune.

“But though there are only a small number of concerts, we’re all doing more to increase the quality of the performances.”