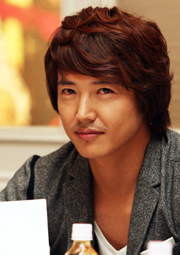 Yoon, who rose to fame recently playing the role of Heo Tae-jun - aka “Tae-bong” - in MBC-TV’s “Queen of Housewives,” is well known for his singing talents. In Queen of Housewives, which ended last May, the actor had a scene where he sang “Never Ending Story,” a popular song by Korean rock group Boohwal. The actor’s version of the song immediately became a huge hit.

Yoon’s newly released single, “Story of Rain and You,” is another beloved Boohwal song. The actor is currently starring in KBS-2’s “My Fair Lady,” and has contributed to the original soundtrack for this drama with a song on the album.