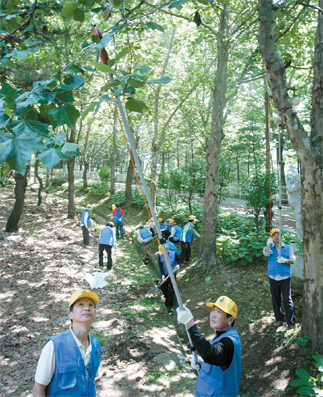 About a dozen people lined a popular hiking trail leading to the top of Mount Gwanak in southwestern Seoul on a recent sunny weekday. The group looked as though it was on a company retreat or some other social outing.

Their faces were flush with oxygen and dripping with sweat from the heat and humidity of the day. But the activity they were engaged in was not hiking. They were straining to lift a pile of heavy rocks to rebuild the collapsed bank of a nearby stream.

The group is part of Hope Works 2009, a government-run public works project initiated to provide employment to people who lost their jobs as a result of the global economic slump.

Hope Works was launched with great fanfare by the current administration on June 1. The mission of the 1.7 trillion won ($1.4 billion) program was to provide temporary economic relief for 250,000 people without jobs in their 20’s and 30’s. The program is slated to run for six months until November. 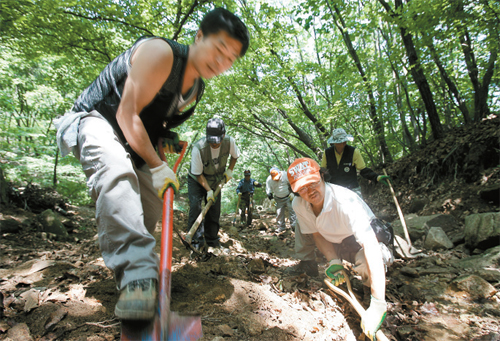 Workers rebuild a bank near a stream on Mount Gwanak, Gwanak District, in southern Seoul. By Jeong Chi-ho

Although the government claims the program has succeeded in boosting the employment rate, critics have questioned the validity of the data. The program’s effectiveness has also been called into question, with some saying that the kind of work the program offers serves as a deterrent to the people who need the assistance, opening the door to abuse by people who actually have other sources of income and are using the program for recreation.

Bae Seung-gi, 53, who lives in Seorin-dong, Gwanak District, is a program participant. He used to work in construction but said that he had been out of work for over three months.

“I needed to pay for my children’s college tuition and I couldn’t go on without work so I swallowed my pride and came out here,” Bae said, explaining why he took the job. “I tried for a long time to find work but I was often rejected because they said I was too old. I was lucky to get this job.”

Bae said that he kept his new job a secret from his family and that it was only recently that he was able to tell his wife that he had taken the job.

Another worker at the site, Jang Gil-su, 56, who lives in Samseong-dong, Gwanak District, used to be an engineer. Explaining how he had ended up participating in the program, Jang said, “My wife asked me to give it a try.”

“When I return home, I sleep better at night,” Jang said. “I think of it as good exercise and I enjoy doing it. It’s fun to work up a sweat out in nature.”

Since he lost his engineering job at 42, he has moved from one job to another. He got a funeral service license but he wasn’t able to find work in that field. He also tried to become a trucker but the price of gasoline was too high to let him keep driving. He desperately needed money and even turned to a loan shark at one point, but he was unable to pay the interest on the loan. He has two adult children, but neither of them are employed, he said.

“I’m still looking for a more suitable job. If I were to find it, I would quit,” Jang said. “But I don’t have high hopes of doing that.”

According to the Ministry of Public Administration and Security, there are now 259,169 people working in the program at 19,000 sites in 16 cities and provinces around the country. Their work ranges from such tasks as restoring and preserving mountains and clearing hiking trails to building bike paths, expanding roads and cleaning schools.

Participants work eight hours a day, five days a week and earn 32,000 won a day, plus 3,000 won for transportation, the ministry said.

The rate is based on the government’s calculations for the minimum standard of living for a family of four. Per month, it is a maximum of 890,000 won.

Hope Works is similar to the public works programs launched 10 years ago during the Asian financial crisis of 1997-98. However, there are some significant differences that have raised questions about the program and the government’s handling of the funds.

Although both programs target job creation, the current program is more intent on producing tangible results, such as the roads and trails, according to the ministry. The previous program was only interested in the employment aspect.

Another difference is that the current program has the secondary goal of providing extra income to small businesses and boosting the local economy. The program mandates that 30 percent of an employee’s salary be paid in the form of gift certificates, which can be used at stores nationwide.

The government chose to divide the salaries this way because it was worried that workers would save the money or use it to repay debt, rather than putting it back into circulation in the local economy.

However, the gift certificates are a significant source of discontent among the workers in the program, even though many say they agree with the idea of helping small businesses.

The certificates cannot be used at large discount stores or bars and need to be spent within three months from the date they are issued.

“It’s a contradiction,” said Oh Sung-hwan, 65, a resident of Samseong-dong who works at the mountain site. If the government had wanted to help small businesses and boost the local economy, he said, it shouldn’t have taken the money out of a program designed to help the poor. It should have created a separate program for small businesses instead, Oh said.

In announcing the program, the government said that the certificates were the same as cash and that workers wouldn’t have problems using them.

Media reports and government data present a different picture, however, with some reports saying that the certificates were being rejected simply because shop owners weren’t aware of them.

Back in July, when the workers got their first paychecks, Seoul city and other regional governments received numerous complaints from program participants about shop owners rejecting their certificates.

As a result, regional governments in Busan, Daegu, South Chungcheong, Gyeonggi and other places launched a buy-back plan to put cash in the hands of the workers.

Some say the real problem with the program is the work itself.

Most program participants are doing work that requires little to no skill. While this means the program has the potential to serve a wider pool of participants, the result, some say, is that the program is open to abuse by people who are not really in need. The fact that over a third of the workers participating in Hope Works are 60 years old or older supports this, critics say.

“Hope Works was intended to help the young and unemployed and those who have lost their jobs due to the economic crisis, but it has become an activity for retired people,” said Ko Kye-hyun, a policy director at the Citizens’ Coalition for Economic Justice. “It’s a waste of money.”

Ko said even though the government said it would try to correct the problems with the previous program, it has not conducted a thorough review of both programs and is repeating its mistakes.

Regarding the fact that over a third of the workers are seniors, Ko said, “[The program] was going in the wrong direction from the beginning.”

He suggested that the program should have developed the kind of employment opportunities that the targeted population would want and need to participate in.

“Young people tend to look for long-term careers. If the work is not the kind that can boost their qualifications, they won’t participate,” Ko said.

Echoing the criticism that the program is not reaching its target group, Chang Hong-geun, a senior researcher at the Korea Labor Institute, said, “Even though the government intended for Hope Works to produce tangible results, there is a limit to the type of work the program can offer.”

The government claims that the program has contributed to a decrease in the unemployment rate, but this, too, has been called into question. Some also wonder whether spending trillions of won on such a program was really necessary.

“The Hope Works program has apparently contributed to lowering the unemployment rate but questions remain about whether 1.7 trillion won was too much to spend on one program,” Chang said.

According to the National Statistical Office, the seasonally adjusted jobless rate stood at 3.8 percent in July, down from 4.0 percent in June, partly because of Hope Works.

There have also been questions about who is working in the program and whether the money is being distributed to those who need it.

When Hope Works began in June, there were media reports saying that people who didn’t really need the jobs had found employment through the program because the government was not checking applicants’ financial information.

Initially, the government said that only those living at the basic level - 1.3 million won per month for a family of four and 135 million won in total wealth or less - would be eligible to participate in the program.

However, a number of regional governments were reported to have accepted people whose income was higher than the requirements because, according to media reports, there were not enough applicants.

On another recent day on Mount Ujang in the Gangseo District of southwestern Seoul, a dozen Hope Works participants were picking weeds out of a hiking trail. One of them, Choi Kyung-ae, 53, a housewife from Ujangsan-dong, said her husband is a college professor.

“I’ve seen many advertisements about Hope Works so I applied. My husband also recommended it,” Choi said. “I am working here to serve the community.”

Choi said she was able to participate in the program because there weren’t enough applicants in her district. When she applied, the neighborhood office that took her application did not ask about her financial status, she said.

Chang, the KLI researcher, agreed that the government had made some mistakes in assessing how best to serve those in need. “The government initially targeted people in their 20’s and 30’s with the idea that they were suffering most from job losses, but a majority of people participating in the program are people over 60 and women with other sources of income,” Chang said.

For some, however, there is no question that Hope Works has provided some hope.

“I had nowhere to go and I’m grateful that I can do this work,” Hope Works participant Bae said.