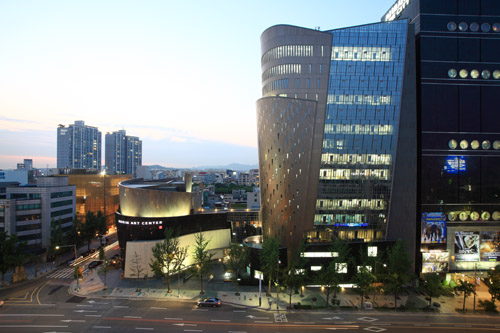 In the 1990s, Apgujeong-dong was the place to be. Its upmarket shops, bars and clubs were crowded with young people flush with money who were looking to see and be seen. But fashion moves fast, and Apgujeong soon fell into the shadows of nearby Cheongdam-dong, with its art gallery-lined streets, chic cafes and haute couture boutiques. Today, the area around Dosan Park in Sinsa-dong has taken up the torch as one of the trendiest neighborhoods in Seoul.
“More boutiques have opened here recently,” said Kim Hyun-jung, a manager at Gorilla in the Kitchen, the Italian restaurant in the Dosan Park area owned by Bae Yong-joon, a star of the Korean wave, or hallyu. “There are more trendsetters coming to this area, and the shops here are more high-end than those in Apgujeong-dong.”
Ralph Lauren chose this location for its flagship store when it opened in May. Marc Jacobs and Hermes also have flagship stores here.
“The area fits the store nicely,” Lee Mi-yang, a spokeswoman at Ralph Lauren Korea, said, when asked why the store had chosen to open here. “There is a relaxing atmosphere with the park nearby and a sense of tranquility, which perfectly embodies what our brand is all about.”
Dosan Park commemorates the life and work of independence activist An Chang-ho (1878-1938), whose nom de plume was Dosan, and his wife. It contains a memorial and tomb as well as walking trails and a garden. Located in the Sinsa neighborhood, it is a 15-20 minute walk from Apgujeong Station.
The park is just south of Apgujeong-dong, creating a barrier between the two areas that was once seen an obstacle to the area’s development. Now, however, many of the buildings in Apgujeong-dong and Cheongdam-dong sit empty, while Dosan Park has become a prime area for development.
“The buildings [around the park] tend to be larger and have more space and that’s why more shops and people have moved there,” said the owner of a real estate agency in the area. 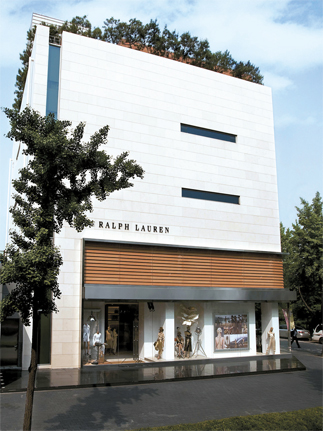 Horim Art Center
The Horim Art Center is a branch of the Horim Museum, one of the country’s three major private museums. It is part of a 15-story office building wrapped in layers of concrete that make it look like a lotus in bloom, which has made it a neighborhood landmark. The tower has a dark brown metallic tone with slotted windows that look like flecks of confetti. The current exhibition is a display of Goryeo celadon. Hours are 10:30 a.m. to 6 p.m. daily, except Sundays and Chuseok. Call (02) 541-3523 or visit www.horimmuseum.org.

Ralph Lauren
The flagship store sells high-end products of the American brand. The first floor is dedicated to accessories, while the second floor is for women’s fashions and the basement has menswear. A spiral staircase winds up to the second floor. This is the best place from which to appreciate the beautiful basalt-tiled floor on the ground level and a Belgian fireplace. This is the only Ralph Lauren store in Korea offering its high-end line, according to a store manager. Hours are 11 a.m. to 8 p.m. Call (02) 545-8200. 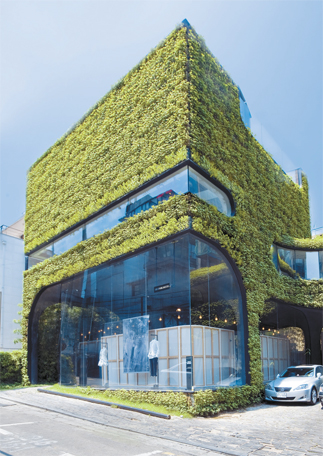 Macos Adamas
A visit to this five-story store is a little like going to a medieval castle. Outside, a statue of a knight on the roof keeps watch over the proceedings below and the walls are decorated with dozens of medieval shields. Inside, each floor is dedicated to a different theme ? a royal palace, a knight’s room, a princess’s chamber, a royal ballroom, a room of mystery and a throne room.
Sterling silver accessories cost about 100,000 won ($80) to 200,000 won and are popular purchases among celebrities. Call (02) 3443-0711 or go to www.macosadamas.com. Hours are 11 a.m. to 9 p.m., except Sundays.

Marc Jacobs
Marc Jacobs opened its first boutique in Korea in this neighborhood. The store carries the largest selection of Marc Jacobs clothing in the country. Call (02) 545-5981. Hours are 11 a.m. to 8 p.m. daily.

Ann Demeulemeester
Ann Demeulemeester is a Belgian designer whose gothic-inspired designs have made a splash on runways from Paris to New York and now Korea. Her clothing is known for its achromatic colors and long lines. Call (02) 3442-2570. Hours are 11 a.m. to 8 p.m., except Mondays. 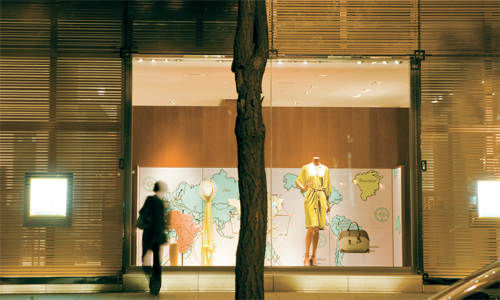 SYK Small Friends
Korean designer Kim So-yeon opened this store last year. The store is notable for its high, triangular-shaped entrance and sells both men’s and women’s clothing. Call (02) 3443-4477 or visit www.smallfriends.co.kr. Hours are 11 a.m. to 9 p.m., except Sundays and holidays. 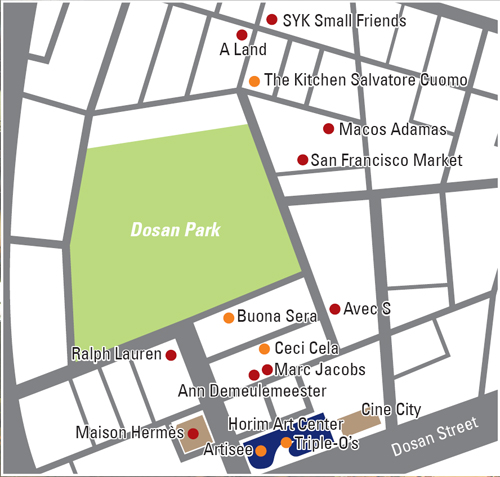 Cafe Madang
This book cafe and restaurant is located on the first floor of Maison Hermes. The bookshelves are lined with nearly 250 art books in Korean, French, English, German, Japanese and Spanish. For young readers, there is a collection of children’s books. Visitors can laze away the last days of summer in the cafe’s garden, which has ginkgo and maple trees. Call (02) 546-3643. Hours are 11 a.m. to 9 p.m. on weekdays and from 12 p.m. to 9 p.m. on Sundays and holidays, except Wednesdays.

Triple-O’s by White Spot
This 80-year-old burger restaurant from Canada is located next to the Horim Art Center. It has 44 branches in British Columbia and Alberta, five in Hong Kong and one in Bangkok. Another is slated to open in Busan, according to restaurant manager Chris Jeon. The simple but smart menu includes fresh burgers, salads, steak and Schmucker brand wheat beer from Germany. Burgers are priced between 7,400 won to 10,000 won. Call (02) 512-2970. Hours are 10 a.m. to 10 p.m.

Artisee
Artisee, also located on the first floor of the Horim Art Center building, is a cafe, deli and patisserie run by The Shilla hotel. The European-style cafe has a pleasant and cozy interior and a nice outdoor terrace. Macaron-lovers will appreciate the cafe’s selection of delectable cookies in nine different colors. Another sweet option is ice cream on a Belgian waffle, which costs 12,000 won. Call (02) 546-1790. Hours are from 8 a.m. to 11:30 p.m. during the week and from 10 a.m. to 11:30 p.m. on the weekend.

Buona Sera
This high-end Italian restaurant is housed in a beautiful Mediterranean-style building. In the main hall, a small garden blooms under a glass ceiling, and the pale yellow interior creates a cozy and pleasant atmosphere. The cuisine is Tuscan and the restaurant has a wine cellar and a bar. There are private rooms for groups on the second floor. Pasta dishes start at 20,000 won. The prix fixe menu ranges from 60,000 won to 80,000 won. Call (02) 543-6668 or visit http://buonasera.co.kr. Hours are 11 a.m. to 11 p.m. daily.

The Kitchen Salvatore Cuomo
Salvatore Cuomo, an Italian chef based in Japan, opened this restaurant in conjunction with the Maeil Dairy Co. earlier this year. It has been popular ever since. Make your reservations in advance, because there is still a two-week-long waiting list. Its Neapolitan pizza is an oft-chosen menu item. Call (02) 3447-0071 or visit www.kitchensalvatore.kr. Hours are 11:30 a.m. to 11 p.m. daily.

Gorilla in the Kitchen
This restaurant became popular because of its association with primary investor and hallyu star Bae Yong-joon. Its menu focuses on fresh food and seasonal specialties. The interior is bright and modern. Hours are 11 a.m. to 11 p.m. on weekdays and 10 a.m. to 11 p.m. on weekends. Call (02) 3442-1688 or visit www.gorillakitchen.co.kr.
The elegant cafes and upmarket shops of Dosan Park are drawing people from nearby neighborhoods.