Night at the museums

Night at the museums

Spectators view the Light Wall show at the Seoul Museum of Art in the central part of the city. The free show is held from 8 to 9 p.m. nightly through Sept. 19. By Choi Jeong-dong

In the museum world, it’s typically lights out at 5 p.m.

But an increasing number of these cultural institutions are staying open well into the night, joining commercial entertainment establishments such as amusement parks and movies theaters that have long operated when the sun goes down.

The National Museum of Korea extended its hours until 9 p.m. on Wednesdays and Saturdays starting in 2006, helping to jump-start a new trend.

Now, 11 other national museums located in regions like Gyeongju and Buyeo also close at 9 p.m. on Saturdays.

Municipal museums have hopped on the bandwagon as well. The Gwangju Museum of Art, for instance, closes at 9 p.m. on Wednesdays, while the Daejeon Museum of Art closes at that time on Fridays.

Your best chance to spend an evening at a museum in the capital is tonight, when roughly 200 galleries and museums in Jeong-dong, Daehangno, Bukchon and Insa-dong will extend their hours as part of Seoul Open Night, a citywide event involving numerous cultural institutions.

The move by museums to stay open later is paying dividends in terms of foot traffic.

The number of night visitors at national museums across Korea this year through July amounted to 82,000, according to the Ministry of Culture, Sports and Tourism.

Hoping to further capitalize on the popularity of nighttime museum visits, some public cultural institutions have even extended their hours until midnight.

The Seoul Museum of Art, for instance, decided to stay open that late on Saturdays this summer, through tonight.

“We made this decision as part of an attempt to disperse visitors and prevent overcrowding,” a museum official said. “And because of a favorable response to that, we also extended our closing time during the week by one hour, to 10 p.m.” 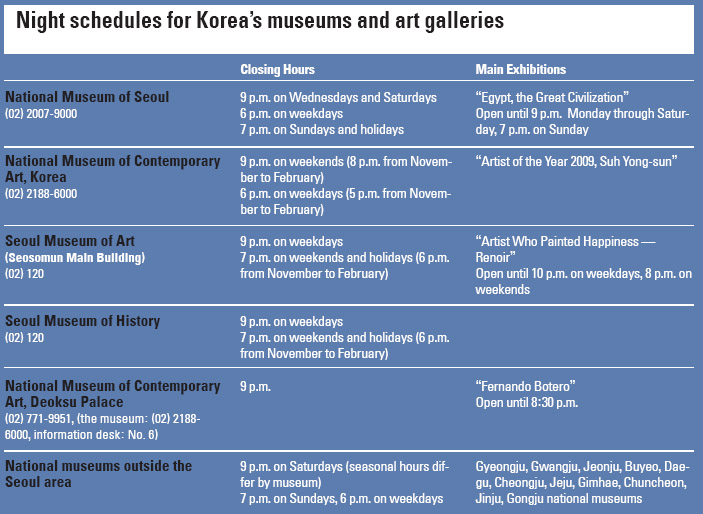 On Aug. 8, in the middle of the peak vacation season, the museum had 2,600 visitors after 8 p.m., which represented 20 percent of all visitors that day.

Museum officials say that a growing interest in cultural activities and the increasingly busy lifestyles of many Koreans are behind the trend.

Jeong Suk-young, a 43-year-old teacher, said he enjoys coming to the museum at night because it’s much less crowded.

“This is my third visit” in the evening, Jeong said one night earlier this month while leading 18 high school students through the “Egypt, the Great Civilization” exhibition at the National Museum of Korea in Yongsan District, central Seoul.

“Now that I know the museum stays open later, I have been coming here at night.”

Choi Jong-min, a graduate student who was also visiting the museum that night, echoed his thoughts.

“I came here to show my friends from abroad Korean culture,” Choi said. “It is quieter without all the little kids running around.”

But that’s not always the case.

On the same night, huge crowds clogged the Seoul Museum of Art in central Seoul to see a Renoir exhibition. The lines at the museum didn’t start to dwindle until after 9 p.m. - less than an hour before closing time. 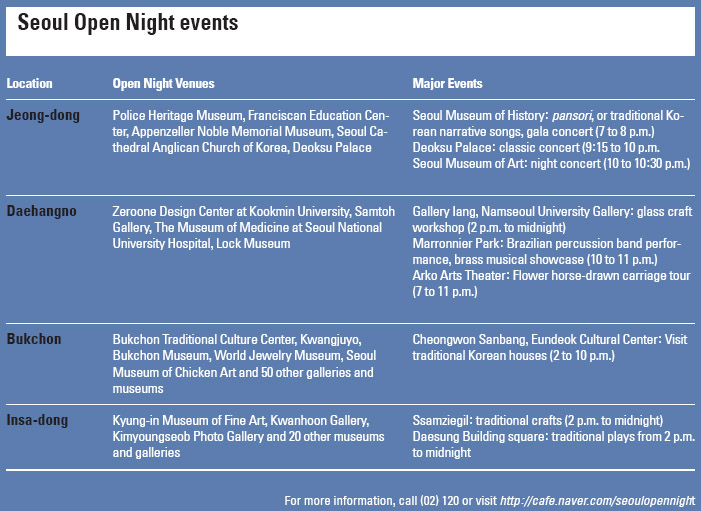 Kim Jeong-sik said during a visit to the Seoul Museum of Art with his family earlier this month that the extended hours work better with his schedule.

“My first child finishes at his hagwon [private education institute] at around 3 or 4 p.m,” Kim said. “It is nice that we don’t have to hurry.”

“When there was an exhibition I was interested in, I used to have to rush out of my office early, and I’d only get to look around for about 30 minutes,” said an employee at the National Museum of Contemporary Art who requested anonymity.

“But now there are many interesting exhibitions I can see late in the evening, so I no longer need to rush.”

Aside from exhibits, museums are also offering special events at night that are normally held during the daytime.

The National Museum of Korea, for instance, now offers its “A Talk With the Curator” program at 6:30 and 7:30 p.m. on Wednesdays.

The museum also provides a shuttle bus from the Gwanghwamun area on Wednesday to offer an easy transportation option to its visitors. Those who take the bus can get a discount on admission.

The Seoul Museum of History, which is open until 9 p.m. on weekdays, hosts free film screenings on Wednesday nights and a free evening concert once a month.

Shim Jae-min, who was at the history museum with his two kids one recent night, said his family couldn’t have visited if it closed earlier.

“The traffic was so horrible due to rain, so we wouldn’t have been able to see the exhibition here,” he said.

The museum’s miniature model of Seoul, which replicates the city in the ratio of 1:1,500, has been a popular attraction with those visiting at night.

Elementary school student Pi Hyun-jun, 10, and his grandmothers Kang Mi-ryeong, 64, and Kang Ae-ryeong, 61, lingered around the exhibit one night earlier this month.

“Hyun-jun has been pestering me to bring him here,” Kang Mi-ryeong said. “While looking at this model of Seoul, I compared the area in which I used to live to where I live right now and could see the little details of how our city has transformed in terms of development.”

But sometimes museums have to perform a little housekeeping during the evenings, which can diminish the experience a bit.

The Seoul Museum of History, for instance, inspects and repairs its miniature model of Seoul - which consists of 700,000 buildings, 200,000 of which are lit - after 6 p.m.

“Three apartment buildings have been already damaged and we need time to repair them,” said an employee of the museum.

“Although it is still open for people to view after 6 p.m., the miniature may be missing some pieces and some parts may be under construction.”