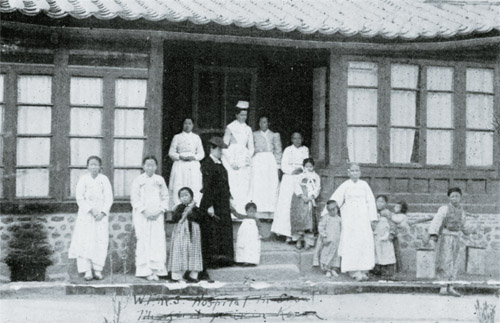 The Salvation for All Women Hospital opened in 1888 in Jeong-dong. Provided by Myongji University-LG Yeonam Library

Oak-pun-ie lost her two hands and a foot to frostbite, forcing the slave girl to use crutches to walk and a pencil tied to the stumps of her arms to write.

She is the protagonist in a 1911 book called “The Happiest Girl in Korea.” Written by American missionary Minerva Guthapfel - who lived here from 1903 to 1912 - the book features the writer’s personal encounters with the Korean people.

On a cold day in 1906, according to the book, Oak-pun-ie’s master brought the girl to a “foreign doctor” some time after she suffered frostbite, hoping to get some future use of her. The girl’s frostbite had until that point been left largely untreated, more or less immobilizing her.

“The little hospital reached, frightened at the foreign women, but too ill to care much, she slept beneath snowy sheets on a funny thing which these foreigners called a bed,” the book reads.

It was here that Oak-pun-ie had her hands and foot amputated and discovered Jesus through foreign missionaries like Guthapfel. Claiming to be “the happiest girl in Korea,” she was later baptized as Anna and stayed in the hospital to preach to the patients. 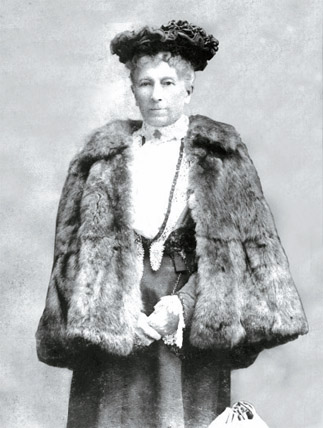 Mary F. Scranton (1832-1909) opened the hospital, which, as its name implied, treated only women. Provided by Ewha Girls’ High School

The “little hospital” in the book refers to the Salvation for All Women Hospital, or Boguyeogwan in Korean, located in Jeong-dong, Seoul.

It was one of two major modern hospitals in Korea established in the 1880s by medical missionaries from the same family, who brought advanced Western techniques and equipment to the country at a time when many commoners used Oriental medicine.

The creation of the Salvation for All Women Hospital is tied in a roundabout way to Universal Relief Hospital, which opened a few years earlier and was also in Jeong-dong. That facility, also called Sibyeongwon in Korean, was established by William B. Scranton (1856-1922), a medical missionary from the Methodist Episcopal Church in the United States.

At the time, it was customary for missionaries to evangelize by working as teachers or doctors in Korea. Scranton, who completed his medical studies in New York, came to Seoul in May of 1885, and his equipment and supplies arrived here shortly thereafter. Scranton renovated parts of his house, which used to be where Chungdong First Church stands today, and opened Korea’s first private, modern hospital in September of that year. 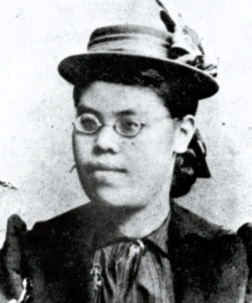 Scranton hung up a sign on the hospital door in Chinese and Korean declaring: “Anybody - man or woman - with any disease come and see the American doctor on any day. Bring an empty bottle.” The bottles were used to hold the medicine he provided.

It seems that Scranton and his staff did treat everybody initially. One of the first patients was a woman suffering from recurrent fever who had nowhere else to turn. According to records, she recovered in three weeks, was baptized Patie and worked for Scranton.

In subsequent years, the Universal Relief Hospital expanded its facilities. Sim Ui-seok (1859-1927), the Korean architect who participated in numerous construction projects, led the expansion. But in 1890, Scranton decided to move the hospital to Sang-dong, near the Namdaemun area, to reach more Koreans.

Salvation for All Women Hospital, meanwhile, was established by William Scranton’s mother, Mary F. Scranton (1832-1909), who opened Ewha Girls’ School in Jeong-dong in 1886. When her students got sick, she sent them to the Universal Relief Hospital run by her son. But she realized that proper diagnosis was difficult, as the girls felt uncomfortable at times with male foreign doctors. Mary Scranton called on the Methodist Episcopal Church in the U.S. to send female medical missionaries. In 1888 she was able to open Korea’s first women’s hospital, with the arrival of a female missionary doctor by the last name of Howard.

“Miss Dr. Howard arrived to begin ... medical work among women, and almost at once opened a dispensary, which has since become a woman’s hospital with two dispensaries in the city,” wrote U.S. missionary Horace Grant Underwood (1859-1916) in his 1908 book “The Call of Korea: Political, Social, Religious.”

In 1892, the hospital opened a branch dispensary near the Dongdaemun area. It later became Dongdaemun Women’s Hospital in the 1930s and then Ewha Womans University Mokdong Hospital today.

According to the book and other records, the Salvation for All Women Hospital was also keen on training locals. It was here that Korea’s first female doctor, Kim Jum-Dong (Esther Park), was trained. In 1896, Kim enrolled at Baltimore Women’s Medical College and became the first Korean woman to earn a doctorate in medicine. 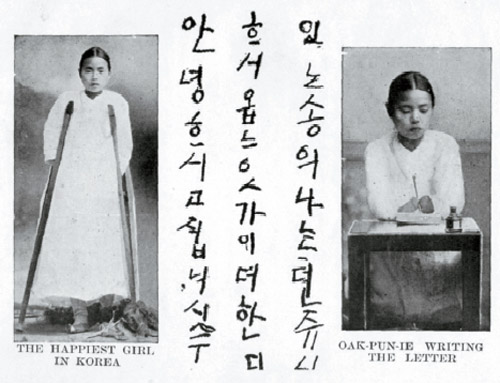 These pictures from the book “The Happiest Girl in Korea” feature Oak-pun-ie, one of the patients at the Salvation for All Women Hospital. Provided by Myongji University-LG Yeonam Library