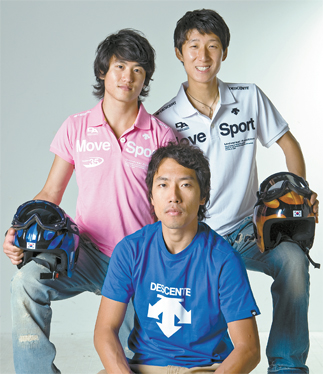 More than six million moviegoers have flocked to see “Take Off” since its release on July 30, an impressive tally for a locally produced flick during its first month in theaters.

But the Korean natural disaster blockbuster “Haeundae,” which was released at about the same time, has stolen much of the limelight, attracting a record 10 million viewers.

Still, Take Off is pulling off a come-from-behind win of sorts, posting higher ticket sales than its bigger competitor for three consecutive weeks.

It’s a fitting development for a movie that focuses on defying the odds and accomplishing the seemingly impossible. And perhaps no one is more pleased with its success - aside from those making money from it, of course - than members of Korea’s actual national ski jumping team, which is the focus of the film.

“I saw the movie with the utmost interest,” Kim Heung-soo, the current 29-year-old coach of the team, said in a recent interview with the JoongAng Sunday. “I was eager to see the audience’s response to the movie, as it is based on our true story.”

The JoongAng Sunday recently sat down with the coach and two of the five members of the team - Choi Yong-jik, 27, and Kang Chil-gu, 25 - to talk about the movie and their experiences in the sport. The film is loosely based on the rapid rise from obscurity of the Korean national ski jumping team, which qualified for the Winter Olympics a decade ago soon after forming and eventually went on to win medals in other major competitions.

“While I found the story both fun and touching, what I watched with concern as well as curiosity were the ski jump scenes in which we, the actual ski jumpers, participated,” Choi said. “I’m glad that audiences get to feel what we feel when ski jumping through those scenes.”

The coach and the players expressed satisfaction with the movie but said that audiences have developed some misconceptions because of the numerous fictional elements sprinkled throughout the film, particularly those involving the main characters.

“There is much misunderstanding when it comes to (team members) Kang Chil-gu and Choi Hong-chul in particular, because the characters in the movie use those names as well,” the coach said. “I encountered some people wondering whether [Kang] is really from a parentless family or if Choi is a nightclub host, as they are depicted in the movie, which is not true.”

Kim - who is single and doesn’t have kids - added that he is also often asked how his daughter is doing. In the movie, the coach has a daughter who is a troublemaker. And unlike the character in the film, who knows nothing about ski jumping, Kim actually was previously a member of the national ski jumping team before he took the reins.

The movie’s director, Kim Yong-hwa, said in a separate interview that he gleaned inspiration for the stories behind his characters from several areas, including adopted athletes. The character Cha Heon-tae (played by actor Ha Jung-woo), for instance, is an ex-U.S. junior alpine skier and adoptee that comes back to Korea looking for his birth mother in the film.

“Toby Dawson, a U.S. national skier who is a Korean adoptee, was the biggest inspiration for that character,” the director said.

Regardless of the fictional elements, audiences have responded favorably to the compelling story of the ski team. In the movie, the Korean national team was urgently assembled with skiers that had no jumping experience.

But in real life, all of the current members - who, with the exception of Kang, were with the team from the start - began taking ski jumping lessons when they were in elementary school. A ski resort built in the early 1990s by the local business group Ssangbangwool in the city of Muju, North Jeolla, the place where they grew up, helped turn them on to the sport. At the time, Ssangbangwool had joined hands with the local government to actively foster young athletes who had potential to become excellent ski jumpers in an effort to raise Muju’s bid for a future Winter Olympics.

Because Korea didn’t have any homegrown ski jumpers at the time, the business group brought in foreign coaches to teach children the sport.

The company also sent dozens of young skiers to Europe and Japan for training sessions. Some of these athletes developed solid talent and gathered together to form a national ski jumping team in the mid-1990s, eventually qualifying for the 1998 Winter Olympics in Nagano, Japan (Muju never got that coveted Winter Olympics, though it did get to host the Winter Universiade in 1997) .

The team has done a remarkable job since then, winning a gold medal at a team competition during the 2003 Winter Asian Games in Aomori, Japan and going on to net successive medals in the Winter Universiade in 2003, 2007 and early this year.

But the team’s current situation is quite precarious. Faced with financial problems, Ssangbangwool cut its support for the team in 1997. Kia Motors stepped in as a new sponsor in 2000 but pulled out about three years ago. Without a corporate backer, foreign coaches left the team - hence Kim Heung-soo’s role as manager - and members now have to worry about making a living in other ways.

“A training allowance of 3.6 million won ($2,879) a year is all that each of our players receives in their capacity as national team members,” the coach said. As a result, the skiers have to take side jobs - one even works at a construction site - to pay the bills.

“I’ve even had to deliver water to golfers at a golf club,” Kang said. “I must say, it hurt my pride as a national team member.

“I tell myself that I’m doing things people do in order to gain some experience in the professional world, but what is distressing is that I can’t concentrate on ski jumping.”

Choi said he struggles with it from time to time, too.

“I didn’t regret my decision to become a professional ski jumper when I was a student, but now I sometimes think that it would have been better if I were engaged in other [more profitable] sports considering my dream of having a family,” Choi said.

Yet there is hope for the team if it can again align with a business, which would potentially allow the members to focus on skiing full time. And two members managed to get on High1, a business-backed ski jumping team, allowing them to devote more time to the sport.

Despite such unfavorable circumstances, the team’s achievements over the years serve as a driving force for the skiers.

“We know we can reach our goals if we just keep pushing forward,” coach Kim said. “That is why we won’t give up despite our current difficulties.”

Kim and the two team members stressed, however, that the last thing they want is pity, saying that they are still passionate. They also all define the rigorous training they have undertaken since childhood as “fun” rather than “toilsome.”

“For me it was a lot more fun going out for a training session than hanging out with friends, unlike many other elementary school kids,” Choi said. “I think because the sport was enjoyable to me from the beginning, I learned it more quickly and better than others.”

And, of course, they get to experience that rush every time their skis leave the slopes.

“What a ski jumper feels when flying into the air,” coach Kim said, “is beyond description.”

The real members of the Korean ski jumping team pose for a photo with Kim Yong-hwa, the director of a movie which features the team.

Left: The actors who play members of the national ski jumping team in the movie “Take Off.” Provided by KM Culture

A ski jumper files into the air in a scene from the film.