Sleepless nights for the living and dead

Sleepless nights for the living and dead 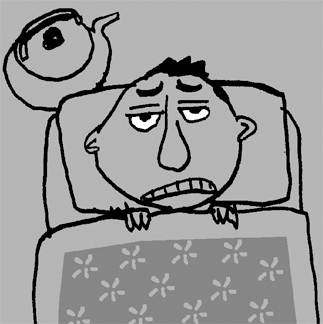 A Sumerian myth tells the story of the dangers of a bad night’s sleep. Enlil, the chief deity, made the gods under him take care of miscellaneous business such as cultivating land. The gods created human beings by mixing clay with their saliva and blood, and let them take over their burden of work. By and by, the number of humans multiplied, and they created so much fuss that the chief deity could not go to sleep. As Enlil could no longer stand the noise, he decided to massacre all humans by drowning them in a flood. Fortunately, however, humans were saved because the other deities thwarted Enlil’s plan in advance.

There’s hardly any pain that matches insomnia. That is the reason why sleep deprivation has been used as a technique for punishment and torture since ancient times. Nowadays, the instances of torture at the Guantanamo detention center in Cuba are well-known. It is claimed American soldiers deprived prisoners of their sleep by keeping on the lights, turning on loud music around-the-clock and moving them from one cell to another every few minutes.

Sleeplessness is not limited to inmates in prisons or concentration camps. Nowadays, night hours brightly lit like daytime, increasing levels of noise and excessive alcohol and drug abuse disturb people’s sleep more than ever.

Sir Thomas More described in his book “Utopia” that the residents of his ideal land slept eight hours a night. But it is not easy for modern-day people to find time to get more than six or seven hours of sleep. Moreover, statistics show that one out of three Americans and one out of five Koreans have trouble sleeping.

Sleeplessness increases the chances of being involved in an accident due to loss of concentration and impaired judgment. It also makes people vulnerable to viral infection and increases the risk of high blood pressure, diabetes and liver disease. Insomnia is a critical disease that can lead to death.

After a protracted autopsy, it is now believed that the cause of Michael Jackson’s death was an overdose of drugs prescribed for insomnia. He fell into the long sleep while he tried to get some shut-eye with the help of drugs. Although his body is going to be buried on Thursday, we cannot be sure whether he will at last enjoy his final rest.

There are mischievous hands that even break into tombs to steal ashes of the deceased, as happened with the remains of actress Choi Jin-sil. The tomb of U.S. President Abraham Lincoln in Springfield, Illinois, was once threatened by grave robbers. In another case, a criminal created a fuss by demanding a $600,000 ransom after stealing the body of Charlie Chaplin from his grave in 1978. Naturally, the two tombs were covered with thick concrete for protection.

Even death, it seems, cannot guarantee a pleasant slumber.