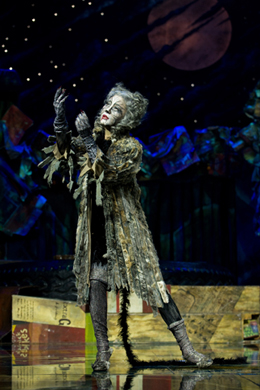 An actress wearing shabby clothes, her hair streaming over her face, passionately sings the lyrics to “Memory,” one of the most famous musical numbers in the world. Her soft voice highlights the touching words, mesmerizing an audience held captive by the performance.

This scene has played out countless times during worldwide performances of “Cats,” one the most popular musicals of all time. But there was something even more notable about the scene during the musical’s run in Korea in 2007. The woman on stage wasn’t an established musical actress. In fact, it was well-known pop star Ock Ju-hyun, the former lead singer of Fin.K.L, one of Korea’s most famous girl groups.

Over the past five years, an increasing number of entertainers like Ock have branched out into the musical field, earning solid reviews for their performances and broadening their creative horizons.

Ock embarked on her lifelong dream of becoming a musical actress in 2005. She was first cast for the leading role in the musical “Aida” but was criticized by some because she was not an established, professional musical actress. Despite that criticism, however, she soldiered on, landing roles in other performances such as “Chicago,” “42nd Street,” and Cats, securing a solid foothold in the musical world.

Choi Sung-hee - a k a Bada, who was a member of the famous girl band S.E.S. - shifted to the musical world to take on the role of Esmeralda in “Notre Dame de Paris.” She has won numerous awards for her performance as the Gypsy, including Best Actress at the 2009 Musical Awards.

Daesung and Seungri, members of the popular boy band Big Bang, acted in Cats and “Passing Rain,” respectively. Son Ho-young from the now-disbanded boy group G.O.D. had a role in “Singles,” while Park Jeong-min from the fledging boy band SS501 performed in “Grease.” Comedian Chung Jun-ha was even given the role of Edna, the mother of the main character in “Hairspray.”

Industry observers say the so-called “star marketing” concept seems to be working when it comes to drawing crowds. Ticket sales for musicals with popular entertainers often outpace shows without such star power, according to an analysis of data from TicketLink, a local online ticket sales agency.

Still, some musical fans are concerned that the inclusion of big-name celebrities lowers the quality of the shows and takes away roles from other, more talented performers.

“It is often the case that entertainers have schedules that are too full to focus on just one show,” said Kim Hye-won, a freshman at Hankuk Academy of Foreign Studies, who is an avid fan of musicals. “Musicals are part of art, and actors are like artists. Musical actors usually practice for at least two years to carry out their roles. It’s a shame that entertainers are taking away the roles [that professional musical actors are supposed to get] with less effort.

“Moreover, most of the audiences attending musicals featuring entertainers are not actually fans of musicals, but of their stars.”

Other fans, however, come back to the fact that the star power helps musicals attract more people, which they say is good for everyone involved.

“Popularity is an important element in musicals. As a matter of fact, it’s a performing art,” said Kim Na-eun, a student of Gwacheon Foreign Language High School, who is preparing to study theater at New York University. “The main purpose is to entertain the audience, and entertainers are having success with it.”

Industry experts say that the important part is the attitude of the actors and entertainers, regardless of where they come from.

“Whether they are professional musical actors or not is not that important,” Ko Sung-il, head of Fire and Ice - a musical-related institution - and a lecturer at Chung-Ang University, recently wrote on Newstage, an online journal for the performing arts. “Understanding the true meaning of acting, that’s the name of the game.”


*This article was written with the assistance of JoongAng Daily staff reporter Park Sun-young.