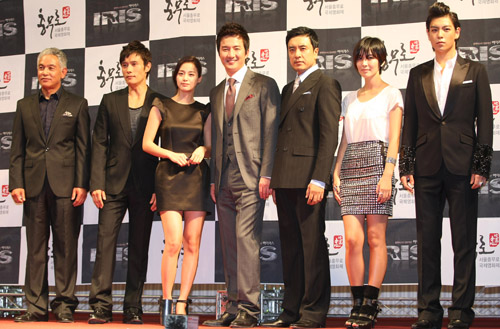 “Iris,” the upcoming espionage TV drama, seems to have all the makings of an entertaining show. Indeed, the program has been generating plenty of hype since the unveiling of its A-list cast and blockbuster scale.

With about six weeks to go until it airs, the cast of Iris gathered at a promotional event Monday at the Cheonggye Plaza downtown as part of the third Chungmuro International Film Festival in Seoul.

The event began with a 10-minute trailer for the show, which was filmed in Korea, Japan and Hungary. Many scenes in the clip involved large-scale explosions and gunfights, as the drama tells the story of assassins in South and North Korea who work for their respective nations. “It was like filming 20 movies,” actor Lee Byung-hun said at the event when all seven of the main cast members came up on stage after the trailer presentation.

Lee, who starred in the current hit film “G.I. Joe: The Rise of Cobra,” takes on the lead role in Iris, playing Kim Hyun-jun, a top agent in South Korea’s National Security System.

“We have a very tight schedule and I wasn’t fully prepared [to film Iris at first.] But I am doing my best,” he said.

It’s been a demanding experience, at least for Lee and fellow cast member Jung Jun-ho, who plays the best friend and rival of Lee’s character in the film.

“There are a lot of scenes where you have to run,” said Jung, adding that both he and Lee love to drink and aren’t exactly in the best physical shape. “When Byung-hun and I run for just five minutes, we start breathing heavily like old men.” Lee shot back, jokingly, “That’s only in Jung’s case.”

In the drama, the two men compete for the love of Choi Seung-hee, played by actress Kim Tae-hee, who is also an NSS agent. The 29-year-old actress is well known for her beauty but has been criticized by many for her acting.

She hopes this drama will prove her critics wrong. “Before starting the shoot for this drama I watched a lot of action movies and studied many similar women characters for my role,” Kim said. “It helped me very much.”

Kim Young-chul, a veteran actor who joined the cast later than others, plays the role of Baek-san, one of the top executives at NSS, who later faces a conflict with Lee’s character.

Kim Young-chul and Lee played characters in the 2005 film “A Bittersweet Life” that had an antagonistic relationship with each other as well. But in real life, the two are more than complimentary to each other.

“Lee is always a hardworking actor,” Kim Young-chul said. Lee replied by telling the audience that he was “jealous of Kim because he has wisdom and energy that flow out of him,” adding that he “respects him very much.”

Another aspect of the show generating attention is the disclosure that T.O.P., a member of the hugely popular idol group Big Bang, has been cast as the government assassin named Vick. A large number of T.O.P.’s fans gathered at the promotional event on Monday to support the 22-year-old singer-turned-actor, who is relatively inexperienced compared to the rest of the cast.

“I’m learning a lot from all the other actors here because right now I don’t know very much about acting,” T.O.P. said. “I want to show people the potential that I have.”

He added that “the drama is great” and that “it will live up to everyone’s expectations.”

Having filmed six months already, the team has three and a half months to go and will fly to Shanghai soon for the next shoot. Iris will begin airing Oct. 14 on KBS-2.