Women of the links

Women of the links 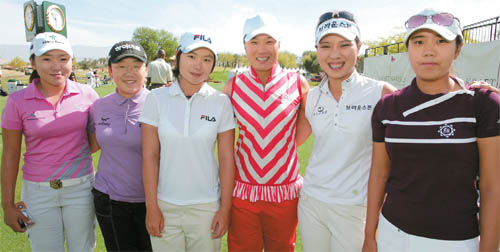 When golfer Pak Se-ri tried to break into the LPGA just over a decade ago, experts here openly chortled, saying it was going to be a painful experience for the nation to watch her fail.

The sooner the ordeal was over, they said, the better.

Boy, were they ever wrong.

Today, those same golf “experts” are frantically searching for the next “Se-ri kid,” a term used to describe young Korean women golfers who followed Pak’s footsteps and made their marks in the LPGA. 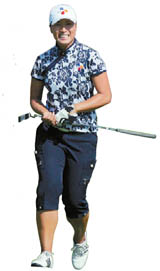 Pak Se-ri at the Jamie Farr Owens Corning Classic at Highland Meadows Golf Club in 2007, in Sylvania, Ohio. She won the tournament at 17 under par. [JoongAng Ilbo]

Pak was the catalyst for the recent Korean invasion of the LPGA, proving that the country could churn out top-notch women golfers with the best of them and providing inspiration for a generation of younger girls. Korean golfers in the LPGA now have a combined 82 wins, 17 of which are attributed to younger players who grew up idolizing Pak, much like many American male golfers look up to Tiger Woods.

The group includes Shin Ji-yai, currently ranked third in the LPGA’s world ranking and a strong candidate for rookie of the year, and Park In-bee, who clinched her first-ever title at the U.S. Open last season.

And the number of Korean golfers in the LPGA keeps growing.

At one point, the tour was playing with the idea of starting a program that would require players who didn’t speak English to learn enough of the language to at least be able to communicate with sponsors. While the LPGA quickly scrapped the plan, many observers felt that the growing contingent of Korean players was one of the reasons behind the idea in the first place.

At the forefront of it all was Pak, who admits she was surprised by how well she initially performed on the world stage and how quickly Korean women made a name for themselves in the LPGA.

“When I made my debut in 1998 my goal was to get a win within three years, but I got four wins my first year, so I achieved my initial goal much faster than expected,” Pak said.

Her rapid rise has a storybook quality to it.

In May of 1998, she shocked the golfing circuit by winning the McDonald’s LPGA Championship. Pak followed that up with a win at the U.S. Women’s Open and notched wins at two other LPGA competitions, earning her rookie of the year honors and catapulting her to stardom not only in her home country but also in the United States.

But it was just the beginning.

In 2001 and 2002, she won five titles each year and put her name on equal footing with the likes of women golfing greats Annika Sorenstam and Karrie Webb.

Five years later, in 2007, she was inducted into the LPGA Hall of Fame.

Today, the LPGA is filled with Korean players, many of whom are regarded as some of the best women golfers in the world.

And many of these women are only in their 20’s, meaning they could continue to progress on the world stage for years to come.

The ranks of this elite tier from Korea include Choi Na-yeon, Kim In-kyung and Oh Ji-young.

Kim and Oh racked up their first LPGA victories last year, while Choi pushed Taiwan’s Tseng Yani all the way to the end in the race for the 2008 rookie of the year honors, though she lost out in the end. Other top women Korean golfers include Lee Seon-hwa, Ji Eun-hi and Yi Eun-jung, who captured the LPGA Jamie Farr Owens Corning Classic last month.

The rise of Pak and South Korean golfers mirrors the growing interest in women’s golf and the LPGA itself.

Then the LPGA really began to take off.

While the expansion of the tour is remarkable, the global financial crisis that emerged at the end of last year has also put a damper on the tour’s fortunes.

The recent decline can be attributed in part to the LPGA’s relatively narrow target audience - female fans - and the fact that it relied heavily on sponsors from the insurance, beverage and banking industries, which were hit particularly hard by the economic downturn.

There’s been some turmoil at the top, too.

Taking responsibility for the current struggles of the tour, Carolyn Bivens stepped down as LPGA commissioner and was replaced temporarily by Martha Evans, a retired Navy official who already has said she doesn’t want the responsibilities of the job on a full-time basis.

Despite the LPGA’s problems, Pak is still helping lead the way for Koreans in women’s golf.

At 32, she has racked up enough accomplishments for several lifetimes. But the golfer said she has yet to hit her full potential.

“I would like to retire after I have reached my peak,” she said. “I’m not sure when I’ll retire, but it might be in another 10 years or 20 years.”

One of her personal goals is to clinch the top spot among LPGA golfers in earnings in a season. Despite 24 wins, including five majors, it’s something she has never achieved. Pak has never been ranked as the world No. 1, either.

Another one of her goals is to net a career grand slam, which involves winning four recognized major competitions. Having already won three, Pak needs a win at the Kraft Nabisco Championship, which has eluded her so far.

“It didn’t happen this year, either,” she said. “But I believe that soon I will achieve my goal.”

Despite that, Pak has the track record to go down as a legend, at least in her home country.

While that could certainly increase the pressure on her and therefore take some fun out of golfing, Pak said she is still having a blast on the greens.

“What is certain is that I am having fun playing golf,” said Pak, who recently signed a contract to design a golf course for a resort in Malaysia and has switched to locally made golf clubs. “Now I really think I am enjoying it.