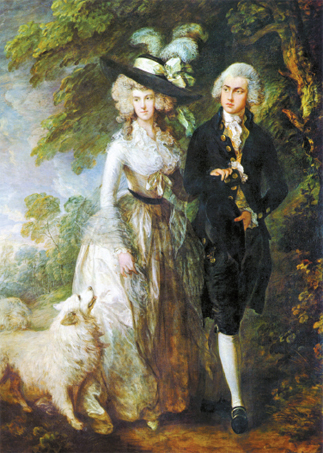 “The Duchess,” a 2008 British film, begins with a scene where a beautiful girl, full of life, runs about in the extensive green grass of a garden with her friends. It ends with a scene where the character, now a woman of matured beauty, runs around a fountain in a garden with her young children. She smiles brightly in the last scene, but the smile is not the same one she wore at the beginning of the movie, as a lot happened to her between that period - including some unbearable experiences.

Still, the woman smiles at the end because she is with her loving children and also because, I guess, she is in the garden, where she can “return to nature,” even if it’s just for a moment.

The woman’s name is Georgiana Cavendish (1757-1806), who lived in 18th-century England as the wife of William Cavendish, the fifth Duke of Devonshire. She was from the Spencer family and is said to share many common traits with her family’s famous descendant, Diana Spencer, the so-called “Tragic Princess.” People say that both were stars of the high society and fashion circuits who also gained popularity with the public. But both failed to craft happy marriages, and it is said that their husbands did not love them. So they both actively threw themselves into political and social activities and pursued new loves.

The Duchess tells the story of the dramatic life of Georgiana Cavendish somewhat plainly, avoiding the urge to spice it up and make it more dramatic, as other biographical films do. Accordingly, the movie might be disappointing to audiences that want to see a dynamic and romantic story that stirs the emotions. However, the film does a good job of providing a window into the life of upper-class ladies in 18th-century Britain.

As for me, I was surprised to see that the lives of those ladies were no better than their counterparts in the Joseon Dynasty in 18th-century Korea, which is known for its strict sense of patriarchy. The Duchess of Devonshire was an influential figure not only in the fashion world but also in politics during her time. In the movie, she attracts people with a new hairstyle featuring big feathers and charms them with witty political jokes. Even so, Georgiana doesn’t dare protest too strongly about her husband’s continued affairs with other women. And she battles pressure from her husband and others to quickly give birth to a son, who will be the sixth Duke of Devonshire.

It is the garden where Georgiana goes to escape her stresses in the film, the place where she smiles while watching her young daughters play. In another garden, she fully opens her heart to her lover Charles Grey, who later becomes Britain’s prime minister. She strolls in these gardens wearing a pastel-colored skirt that makes crisp sounds as she walks and a big hat decorated with ribbons and feathers elegantly tilted on her head - just like the lady in “Mr. and Mrs. William Hallett” (1785) by Thomas Gainsborough (1727-1788), a master of portraits and landscapes. There are in fact a few actual portraits of the real Georgiana Cavendish, also done by Gainsborough. But, to me, the image and fashion of Georgiana as played by the British actress Keira Knightley in the movie provide a better representation of Mrs. Hallett. 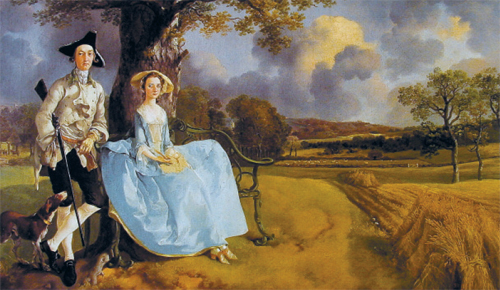 The gardens where Georgiana walks are not in the French style, where flowers are planted in geometrical patterns to look like splendid carpets and where living hedges stand straight in symmetry to divide spaces. Rather, they are the English landscape gardens that feature wide green lawns, groves of trees, calm lakes, archaic bridges and walls and buildings that blend smoothly with meadows of grazing sheep and distant hills and mountains.

As opposed to French gardens full of artificial beauty, the English ones drew inspiration from idyllic and poetic views of nature in landscape paintings. They were the embodiment of the “return to nature” philosophy espoused by writers of the time such as Jean-Jacques Rousseau (1712-1778). Chatsworth House, one of the locations used in The Duchess, is known as a place where visitors can see the essence of English gardens.

In such gardens, Georgiana returns to nature for a fleeting moment, where she gets in touch with her inner feelings and derives innocent pleasure.

The overall visual feel of the movie resembles paintings by Gainsborough, who was popular for his portraits but actually preferred his landscapes. He frequently painted portraits in garden settings so he could incorporate landscapes yet still meet the demand of the day.

A quintessential Gainsborough painting that combines both portrait and landscape is “Mr. and Mrs. Andrews.” According to the National Gallery in London, which has the painting, the portrait of the couple was painted shortly after their wedding, as a kind of commemorative piece. The wife is sitting on a bench under an oak tree with her light blue satin dress gracefully spread around her, while the husband - donned in hunting clothes - proudly stands with his shotgun under his arm. Behind the couple stretches a landscape that includes a recently harvested golden wheat field and a meadow of grazing sheep in the distance.

One question that comes to mind is why do the faces of the Halletts and the Andrews in these beautiful fields and gardens seem so stern? The custom at that time was to paint aristocrats with aloof and emotionless faces and manners so that the figures could retain their dignity and keep the public at a distance. Upper-class people were bound by their social status and formalities from returning to nature, even in these lovely English gardens. 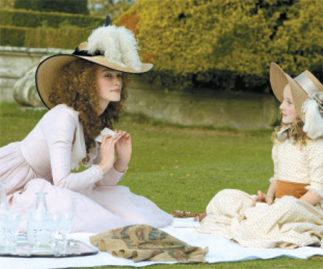 A scene from the 2008 film “The Duchess,” taken at Chatsworth House in England

In the movie The Duchess, which begins in a garden and ends in a garden, Georgiana also failed to return to nature. She chose to remain beside her husband in order to be with her children, ultimately casting aside her feelings for Charles Grey.

But instead of falling into the role of a passive, helpless and hopeless housewife, she remained a queen of society and a politically influential figure. In the end, it seems, gardens are not nature itself but representative of our nostalgia for nature.