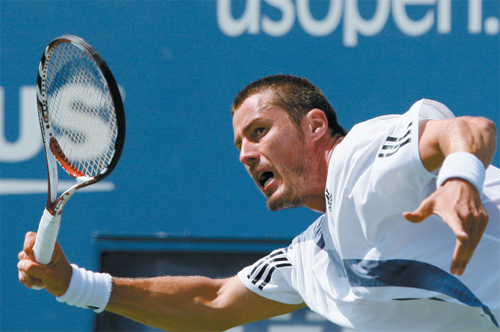 Marat Safin of Russia stretches for a return during his match against Jurgen Melzer of Austria in the first round of the U.S. Open tennis tournament in New York, on Wednesday. Melzer won 1-6, 6-4, 6-3, 6-4. [AP]

NEW YORK - Former world number one Marat Safin concluded his Grand Slam tennis career Wednesday at the U.S. Open with no regret, no qualms about losing, no desire to change anything and feeling like a lottery winner.

The 29-year-old Russian, a two-time Grand Slam winner who will retire at year’s end, exited with a 1-6, 6-4, 6-3, 6-4 first-round loss to Austrian Jurgen Melzer at Louis Armstrong Stadium.

Safin, who won the 2000 U.S. Open and 2005 Australian Open, announced at the start of the year that this would be his final season and while he might play again this year, he is happy the Slam farewell tour has finally run its course.

“It’s OK,” he said. “It’s the end. It’s the last one. Could have been a better ending, but still OK. I’m looking forward to after my career so I have no regrets. I don’t care about losses anymore. I have no worries about it at all.”

Safin, ranked 58th, fired 15 aces but lost to Melzer for the fourth time in five meetings after two hours 13 minutes. The crowd stood and applauded Safin as he grabbed his bag, waved to the fans and walked off the court.

“I have a very nice feeling,” Safin said. “I’m really pleased the way the life treated me. Tennis was really very nice to me. It was a pretty nice ride.”

Safin, who had one final jawing session with an umpire over a signal for a call review that went his way, won the first set in 27 minutes but struggled after that and in the fifth game of the last set struggled to reach returns, letting the break point past him uncontested.

“My head is already in afterwards tennis rather than here,” Safin said. “I have been doing it for a long time and I’ve been struggling for some time, so for me it’s just a new stage in my life.

“This is perfect timing. I’m still young. I don’t have a family. I’m ready to make a change. Why not?

“I’m happy. I’m OK with the decision. I think it’s just enough. I achieved what I want to achieve and I want to do something else, which is fair enough.”

Safin called his 2000 U.S. Open final victory over Pete Sampras a “miracle” but said he was unprepared to handle such success at age 20.

“After beating Sampras, I never really understood what happened, to think how big this thing really was,” he said. “It was difficult. I was 20. I wasn’t ready for this.

“Miracles really happen. I won the lottery. The way things fit together. It’s really amazing. I really can’t describe it. It has no logic.”

Safin called his final career title at the 2005 Australian Open the most satisfying. “It was very important for me to win the second one,” he said.

Safin remained elusive about post-tennis plans, although fourth seed Novak Djokovic said Safin was off to climb a mountain in South America.

“He should keep his mind into tennis instead of giving up my private life,” Safin said. “I need some time off. I need to get away from tennis for some time to realize what I will miss about it.”

One thing Safin will not do is tennis television commentary.

“I’m [not a] person who wants to lay back and do nothing for rest of the life and talk nonsense on ESPN,” he said. “I will not do that. I want to achieve something else. AFP