Palace with chaotic past born again

Palace with chaotic past born again 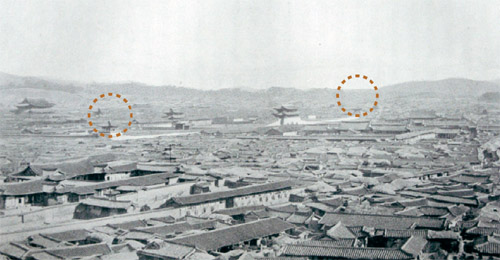 A sweeping view of Gyeongbok Palace and its vicinity, including the east and west watchtowers (circled) on the palace walls. Provided by Myongji University-LG Yeonam Library

They are some of tourism’s great joys: Visiting royal palaces to see how the most powerful men in the country lived, walking the exact same road where high-profile families once strolled and getting a taste of what it was like to rule an entire kingdom.

Many tourists who visit Korea’s palaces find themselves fantasizing about the royal life - its glory and splendor, its untold stories and its dirty secrets.

There’s perhaps no better way in Seoul to relive this lifestyle than at Gyeongbok Palace, which was the official royal residence of the powerful and prestigious Joseon Dynasty (1392-1910). The compound ranks as the largest and oldest major palace in Seoul, ahead of Changdeok, Changgyeong, Deoksu and Gyeonghui.

Its name means “a blessed palace,” highlighting its significance to the kingdom. But the title seems quite ironic now. History, after all, hasn’t exactly been kind to this palace - or its occupants.

As the name implies, there were initially some high hopes for the palace. An article published on Sept. 9, 1394 - the year prior to its completion - in the Annals of the Joseon Dynasty was optimistic.

“The site has its back to the northwest and faces southeast, the land is even and wide, and the terrain is good with surrounding mountains overlooking it,” the article said. 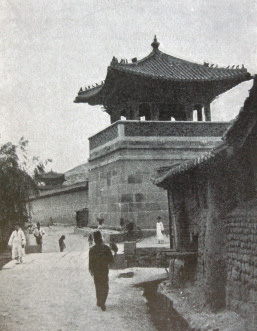 The east watchtower was initially attached to the palace wall.

The wall that surrounded the palace compound, which was finished three years after King Taejo (1335-1408) founded the Joseon Dynasty, was 1,933 meters (6,342 feet) long and included a door facing each direction. At the ends of the front wall stood watchtowers: one to the east and one to the west of Gwanghwamun Gate.

Among Seoul’s five major palaces, Gyeongbok was the only one with these types of watchtowers.

The main picture at the top of this page - a photo that was originally published in “Korea and Her Neighbours,” written in 1898 by English writer and historian Isabella Lucy Bird (1831-1904) - provides a rare glimpse into what the watchtowers looked like before the 20th century. Back in the day, royal guards would’ve been stationed on them to keep an eye out for threats in the vicinity.

During the Japanese colonization of Korea from 1910 to 1945, the Japanese removed the west watchtower while redeveloping the city’s infrastructure. They left the east watchtower in tact, but it ended up looking awkward in its new surroundings. It is now completely detached from the palace wall - which the Japanese moved inward by several meters - and stands at a busy intersection.

For the first 200 years of Gyeongbok’s history, the palace appears to have served its purpose well, undergoing numerous renovations and expansions and gradually taking on the regality fit for a royal residence.

But that came to a rather abrupt end during the Imjin War (1592-1598) between Korea and Japan, when Gyeongbok Palace burned to the ground during fighting. 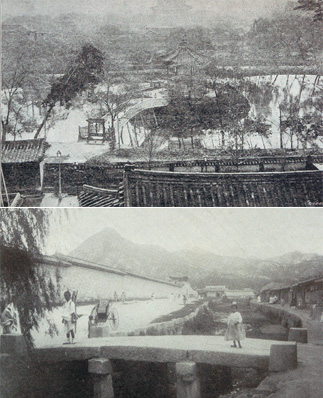 Top to above: The Geoncheonggung building, where Queen Min was murdered, and the Hyangwonjeong pond and pavilion at Gyeongbok Palace. A stream, called Junghakcheon, used to run to the east of the palace.

“The enemies have taken the capital. […] The palace was all burned down by then. So the captain of the enemies took his men to Jongmyo [the royal shrine],” reads a May 3, 1592 article in Annals of the Joseon Dynasty.

It wasn’t until more than 270 years later that rulers in Korea decided to revive Gyeongbok Palace.

In 1865, two years after King Gojong (1852-1919) was enthroned, his father Heungseon Daewongun (1820-1898) - who was ruling the country until his teenage son came of age - announced plans to rebuild the palace mainly to solidify his and Gojong’s leadership.

Restoration was not easy, nor was it cheap. In order to generate money for construction, Heungseon Daewongun forcibly collected funds from the Korean people, giving his opponents a reason to denounce the move. Nonetheless, Heungseon Daewongun rebuilt Gyeongbok Palace three years later.

The palace quickly became a landmark in Korea, both for locals and for visitors. Books written on Korea by foreigners in the late 19th century often contain at least a paragraph or two on Gyeongbok Palace.

“The great sight of Seoul is the Imperial Palace, a modest replica of the Forbidden City in Peking [China],” American travel writer Burton Holmes (1870-1958) wrote in his book “Burton Holmes Travelogues.” “The avenue of approach is long and wide, bordered by the low structures housing the various departments of the government. The background is imposing, a range of tall sharp peaks over which the city walls go climbing in sweeping zigzags.” 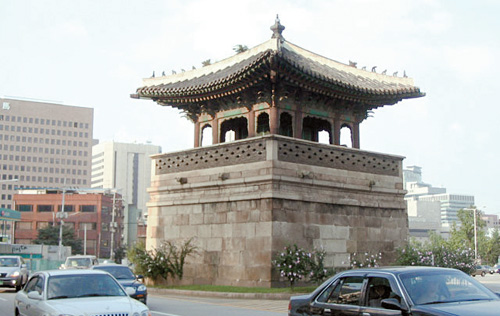 The east watchtower, pictured here, was detached from the main palace wall during the Japanese colonial period.

English historian Bird also was a frequent visitor of Gyeongbok Palace. “I have been altogether six times at this palace, and always with increased wonder at its intricacy and admiration of its quaintness and beauty,” she wrote.

American missionary Lillias H. Underwood (1851-1921), in her book “Fifteen Years Among the Top-knots,” describes rather unknown sides of the palace, such as those related to a Christmas tree and ice skating.

“Soon after Christmas I dressed a Christmas tree for the royal family, but to my great vexation, the effect was quite spoiled because their majesties were too impatient to wait till dark to view it.”

Additionally, she wrote, “Twice during that winter the queen bade me ask all my friends to skate on the pond in the palace gardens.”

But the palace couldn’t shake its unlucky streak, and several tragedies occurred there in the final years of the Joseon Dynasty. 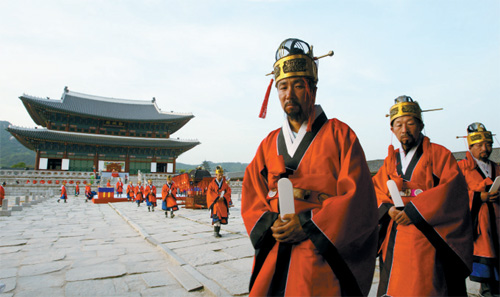 It was here that Queen Min (1851-1895) was murdered by Japanese assassins in 1895. After that, King Gojong lived there in fear, with some foreign authors describing the ruler as a “prisoner in his own palace.”

After Gojong fled to nearby Deoksu Palace, the Japanese took control of Gyeongbok Palace in 1911. By 1915, more than 90 percent of the structures at the site were demolished, historians say. The Japanese also built a central government building at the southern entrance of the palace, moving Gwanghwamun to an area near the eastern gate.

Once again, however, locals looked to restore Gyeongbok to its former glory. In the 1960s, Koreans rebuilt Gwanghwamun and - after razing the Japanese government building in 1994 - moved it back to what was deemed its original location.

Historians, however, noted later that it was not technically the original site - prompting the government to launch a major reconstruction project in 2008. The restoration is scheduled to wrap up next year, bringing the troubled palace back into the spotlight and helping it regain some of its former glory once again.