It’s getting hot in here

It’s getting hot in here 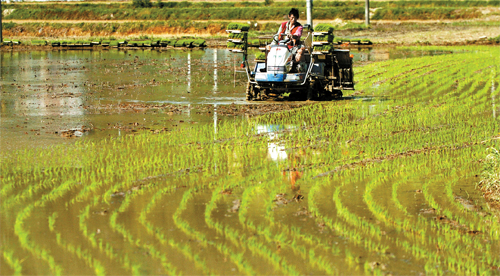 We frequently hear about the negative effects of global warming: the inclement weather, the melting of the polar ice caps and the extinction of various species.

It hardly seems that anything positive could possibly come of high heat and, well, the disappearance of life as we know it.

But believe it or not, researchers in Korea are trying to wrest good news from the bad by experimenting with planting and growing techniques that could increase rice production or allow for the cultivation of semitropical fruits and vegetables such as bananas, artichokes and okra.

According to a report titled “Korea’s Climate Change: Present and Future” released by the National Institute of Meteorological Research earlier this year, the average temperature of the Korean Peninsula will increase by 4 degrees Celsius by 2100, giving the southern part of the peninsula a semitropical climate. That climate classification implies an air temperature that usually does not go below freezing.

The Rural Development Administration is currently conducting some of the first experiments in this country on whether double-cropping is possible in Korea.

Double-cropping allows a second crop to be planted on the same site in the same year after the first crop has been harvested. The practice is common in semitropical areas south of the Yangtze River in China and in locations in Vietnam and other Southeast Asian nations.

Although the administration’s results demonstrate that the Korean climate will not yet support the technique, its further research shows that things could change if temperatures continue their upward trend.

The National Institute of Crop Science, a governmental organization, produced similar results when it did experiments with double-cropping in Songhak-dong, Iksan, South Jeolla, earlier this year. The experiments were the first to be done outdoors in Korea, as opposed to in a greenhouse.

The institute planted rice plants in different periods beginning on March 20, which is earlier than the regular planting season.

Those planted on March 20 mostly died because of the last cold snap of the winter. Another batch of rice was planted on March 30 but only half survived because the temperature had fallen below 0 degrees Celsius three times in early April. A third batch planted on April 10 is already mature.

“We plan to do another harvest in mid-August and plant rice plants again, but under the current circumstances double-cropping doesn’t seem possible,” said Koo Bon-il, a senior researcher at the National Institute of Crop Science. “For double-cropping to be possible here, the average yearly temperature needs to rise by at least 1 degree Celsius.”

Korean farmers plant rice when the average daily temperature rises above 15 degrees Celsius, which is in late May or early June, depending on the latitude of the area. Harvesting takes place around 130 days after transplanting, in early or mid October. 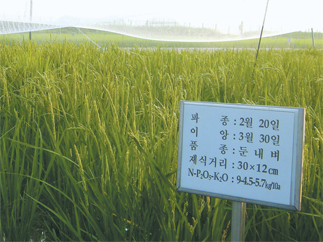 The rice planted by the National Institute for Crop Science on April 10 is almost ripe.

“Next year we will experiment with seeds that can survive in colder areas like northeast China or Hokkaido, Japan,” Koo said. “If the temperature continues to rise as fast as it does now, we’ll be able to practice double-cropping without much difficulty in Korea in 20 years.”

Meanwhile, the Rural Development Administration has been conducting separate experiments on the possibility of cultivating semitropical crops since last year. The administration is trying to determine the kinds of crops that can be planted if Korea becomes subtropical and what kinds of technology will be needed to facilitate the growing process.

As part of its efforts, the administration opened the Agriculture Research Center for Climate Change in Odeung-dong, Jeju City, last October. The center is cultivating semitropical and tropical vegetables such as sugar beets and okra in its fields and greenhouses. Its experiments are based on the idea that 17 percent of the regions with farmland, including on Jeju Island and in the southern part of the peninsula, will have a semitropical climate by 2020.

The center has also been supplying farmers with artichokes, okra and balsam pears. Artichokes originated in the Mediterranean and are good for the liver and kidneys. Okra is known to lower blood sugar levels.

The center recently concluded that artichokes can survive in the ground even during the winter. It has also found that Indian spinach, which has 45 times more calcium than regular spinach, can be grown in a greenhouse without heat until December.

Other experiments are being done with turmeric, which is used for curry, and chayote, a kind of fruit.

Aside from these experiments, there has been some success with mangoes, which are a tropical fruit. Mangoes, which have their origins in India and Southeast Asia, were adopted by Jeju farmers in the late 1980s and have been sold in Korea since 2000. In 2006, the fruit was grown on 15.1 hectares (37.3 acres) of land by 34 farming households on Jeju. Last year, mangoes were grown on 25.7 hectares of land by 55 households. 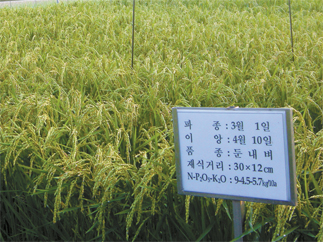 But the rice planted on March 30 is not yet mature because of the cold spells in early April. This demonstrates that the Korean climate cannot yet accommodate double-cropping, which would require a longer growing season than is now possible here.

Still, mangoes can only be grown in greenhouses. To increase mango production, the Rural Development Administration has also been working to reduce heating costs.

“Jeju Island is the southernmost island in Korea and therefore it is the place in Korea most affected by the global warming,” said Mun Du-gyeong, a manager at the Agriculture Research Center for Climate Change. “It is also the best place to study alternative crops. We are trying to find and develop new semitropical and tropical crops that can be grown by Korean farmers.”