A window into the art world

A window into the art world 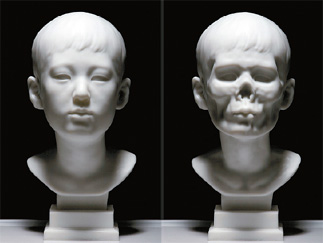 “Childhood” by Lee Byung-ho, silicone, 19x17x27cm, will be on display at the ShContemporary 2009 art fair, which opens today in the Shanghai Exhibition Center in Shanghai, China. Provided by the gallery

Is the global art market emerging from the aftermath of the financial crisis? Is the Asian contemporary art boom in recent years simply a bubble that’s bound to pop or a long-term trend that will continue into the future?

The ShContemporary 2009 art fair, which opens today in the Shanghai Exhibition Center in China, hopes to answer these questions and highlight the different interpretations of contemporary art through its special exhibits.

The oddly named international art fair has rapidly grown into a major event since its launch just two years ago under the leadership of Lorenzo Rudolf, the former director of the Art Basel show. The level of interest in - and sales at - this year’s event will provide a window into the contemporary art scene in Asia today as the global economy claws its way out of a brutal downturn.

ShContemporary organizers said in a statement last week that the art fair’s “Discoveries” section will display works that address the question of what exactly contemporary art is through a curated exhibition and forum. For this exhibition, 23 artists from all around the world, from the established to the just emerging, have been selected by a team of three curators to present their individual responses to this question, according to the statement.

Among these artists will be two Koreans, Bae Young-whan and Kim Sang-gil, represented by the Seoul-based PKM Gallery. The ShContemporary show also includes the “Best of Galleries” and “Platform” sections. The Best of Galleries area will present invited galleries including Long March Space and Art Issue from Asia as well as Galleria Continua from Europe and James Cohan from the United States, among others. Also featured will be Korean galleries such as Juliana, Park Ryu Sook and Zandari.

The Platform section focuses on emerging artists and works made in the last two years.

ShContemporary has created a specialized team this year focused on engaging with emerging collectors in China and creating fresh networking opportunities.

“We have resources larger than those of individual galleries or independent advisers, and we want to put these resources to use all year - instead of just for a few days during an annual art fair - to create a powerful means for the stimulation of the market,” fair director Chinnery said in the statement.