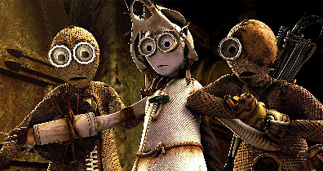 In the post-apocalyptic world where “9” takes place, the only things moving are small, mechanical rag dolls and the robotic beasts that pursue them. One of these rag dolls, identified only with a number nine on his back, awakens in a laboratory, not really sure who he is or what’s going on.

But it’s not long before No. 9 (Elijah Wood), as he’s called, finds others just like him, hiding out in an old church where they are safe from the destructive forces around them. They are led by No. 1 (Christopher Plummer), who is strict and fearful of the outside. When one of their numbers is kidnapped, No. 9 wants to strike out on a rescue mission, to which No. 1 fiercely objects. No. 9 disobeys, only to accidentally awaken a terrible, mechanical monster. Bad news, for sure.

The film can be a visual treat at times. The rag dolls can be vibrant and expressive, and the evil robots that pursue them are complex and interesting pieces of animation. But since all of these creatures are grounded in aspects of the mechanical world, it really made me yearn for an age before ubiquitous CGI, where stop-motion and animatronics ruled.

The film does a good job of pacing, presenting large mysteries while never revealing all the answers. But considering the amount you’re left wondering about at the beginning, as well as some fairly high thematic expectations set up from the get-go - the danger of reliance on technology and progressive thought versus jaded dogma - it ends up failing to be anything more than kind of disappointing. It doesn’t touch any ground that wasn’t covered 10 years ago by “The Matrix,” and you would think that by now there would be some new things to say.

Another curious thing about this picture is the Internet campaign that preceded it. The fictional creator of the rag dolls has been keeping a Facebook page for a few months, describing the personalities of his creations and the struggles that drove him to their invention. Another Web site offers narratives to help bring prospective viewers up to speed with the film’s context.

I’m sorry, but shouldn’t a movie be capable of doing all of these things by itself? The Web sites provide you with all the film’s exposition and them some, making it seem like the filmmakers don’t really see the need for you to make a trip to the theater. Kind of ironic, since the film is not much more than a warning about becoming too reliant on technology.